"Nothing is impossible. The mind is master of all things."
- The Thinking Machine ("The Problem of Cell 13")

Max Allan Collins vanished from my reading list as fast as he had appeared on there, but nothing to the detriment of Collins as a mystery writer. I was just too occupied with the classics to give much attention to newer writers and it took some serendipity to finally put another volume from his defunct Disaster series in my hands.

The "Disaster Series" tells to the untold stories of some of the previous centuries most celebrated (crime) writers, who took it upon themselves to collar a murderer during world shaping events. Agatha Christie tangled with a serial killer in The London Blitz Murders (2004), but I spoiled that one for myself by looking up some of the characters while reading the book. A mistake I avoided with the next book, The War of the Worlds Murder (2005), in which Walter Gibson, creator of pulp hero the Shadow, has to save Orson Welles from a murder charge that is looming above his head like the Martian invaders from his play – and I remember that the story was very much in spirit of that famous Panic Broadcast. 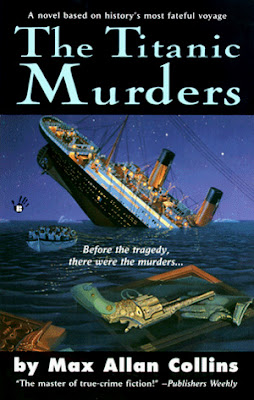 Last week, I acquired The Titanic Murders (1999) that imagines an answer to the question if Jacques Futrelle's crime-solving talents were engaged aboard the R.M.S. Titanic.

Futrelle was an American journalist turned fiction writer and remember today for fathering one of the immortal detectives of fiction, Professor S.F.X. van Dusen a.k.a. "The Thinking Machine." There's a tragic beauty that Futrelle and Van Dusen had their final adventures together, because Futrelle had on him a batch of unpublished Thinking Machine stories. They went down together, after Futrelle made sure his wife May was safe in one of the lifeboats.

Before I had arrived at the "Notes for the Curious"-like section at the end of the book, I had settled for the authors word that painstaking research had gone in weaving fact with fiction, which must be challenging when building a drawing room-style plot around hard facts. I think it was a job well done.

The Titanic Murders opens, unusually in a historical mystery, in the present with the author of this book and an anonymous phone-call from a man claiming to have been part of a salvage crew that discovered two bodies in the cold storage of the wreck of the Titanic. This leads the author and his wife to daughter of Jacques and May Futrelle, who has heard a rather fantastic story from mother that now appears to be grounded in truth. Rewind back to April 10, 1912 and the Futrelles are set to sail home on the maiden voyage of men's latest nautical masterpiece, R.M.S. Titanic, unsinkable and furnished with all the comforts of the land – even steerage is uncommonly luxurious compared to other ocean liners. Second Class is basically First Class with less glamour, but the Futrelles find that their Second Class ticket has been bumped up to a First Class. The White Star Line wants First Class filled with high profile names and they would like Futrelle to pen a detective novel set aboard the Titanic. It proves a perfect opportunity for Jacques and May to finally collaborate on a novel.

John Crafton's business proposals are less than welcome and Futrelle has to dangle him over a railing to make clear that he's not interested in putting a dime in a blackmailers pocket, but he can't stop Crafton from bothering other passenger into becoming clients of him. Of course, someone puts a stop to Crafton and a maid, upon entering his locked cabin in the morning, finds his naked body. I have to say that The Titanic Murders is one of the most minimalistic locked room mysteries I have ever read. You're never sure if it's a locked room situation until the ending, when a rather simplistic answer is supplied. To quote Futrelle, "So much for the locked-door mystery."

Futrelle convinces the ship director and captain that Crafton was smothered to death with a pillow, instead of having died of a heart attack, and begins a discreet investigation among the important guests that have been approached by Crafton – trying to pry loose the blackmail stories. The plot is perhaps not as grand as a mystery addict, spoiled by Agatha Christie's travel mysteries, expect from a whodunit set aboard the Titanic, but I will confess to a spot of hypocrisy and admit that I was more enamored with the characters and setting than with the plot. So there you go. Collins' depiction of Jacques and May Futrelle also reminded me of Bill Pronzini and Marcia Muller's Sabina Carpenter and John Quincannon, if they end up being married by the early 1900s.

All in all, an excellent read that toys with an interesting premise and kept me page bound well into the authors note. It also serves me as a reminder to add yet another name to my wish list. I've already been informed that Collins wrote a mystery novel set a convention (several of those have been discussed on here last months), and I have to say, The Lusitania Murders (2002) looks like a fun read. I love rival detectives matching wits!