TNT may have canned Leverage after a run of five seasons, but the creative force behind the series are exploring new avenues to pull Nathan Ford and his crew back into the game, which is possible because the show was produced independently, and a movie is a popular rumor at the moment.

In the meantime, they'll keep us fans hooked with a series of paperback tie-ins they've commissioned and the first one in line, The Con Job (2012), proved to be a lot more fun than the bland title would have you believe. Matt Forbeck penned the first novelisation and I think it's a worthy addition to the canon, which also added to it, but the best part is that it still felt like Leverage – and that we can tag along with them again. 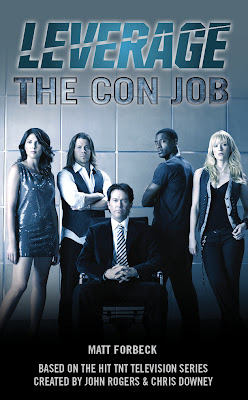 The Con Job takes place between The Gold Job and The Radio Job, episodes 16 and 17 of the third season, and Alec Hardison, hacker extraordinaire and resident geek, has found themselves a target: a disreputable dealer, Lorenzo Patronus, whose been filching rare comic-books and valuable cover art from their old creators. These were works from poor, freelance artists who hung on to them as an alternative retirement plan. Well, that pissed off a genius hacker/geek, who has a little Justice League of his own, and they're off to Comic-Con – where their mark intends to sell off the stolen goods.

As to be expected, the plot is littered with pop-culture references, ranging from Star Wars to Spider-Man, cameos from Stan Lee and Patrick Stewart, and even a sub-plot involving the manga publishing industry and a few "play-fights" that the combat hardened Eliot had to participate in – enough material for some of that Leverage humor. The con they play is basically a "Devil's Contract" that could fulfill Patronus' boyhood dream, becoming a recognized comic book artist, which is a cue for Sophie Devereaux's character, talent agent Jess Drew, to discover an unrecognized talent. But there's more than meets the eye (pop-cult reference!), when an old nemesis turns up, the less-than-scrupulous and source of general annoyance Cha0s (Hardison's rival), which is not a weird thing in itself considering that they're at Comic-Con, but when Hardison goes missing – they know that a third party is involved.

However, it's the crew that, as to be expected, stole the show in The Con Job and that’s immediately my only quibble: my favorite character, "The Mastermind," Nathan Ford was pushed into the background and gave Hardison the lead. His reluctance to enter Comic-Con is one of those things that added to the character, but I preferred to have had him a bit more in the front. That aside, I tremendously enjoyed tailing Eliot, Parker and Sophie around the stands and watch them off-page deal with the amount of unusual trouble you'd expect from Leverage. Heck, Eliot and Parker cosplaying as a Stormtrooper and Princess Leia, as they struggle through a crowd, should be the end all argument to bring the series back on the air and kick-off the new season with an adaptation of this book.

Anyhow, what matters are that Leverage is back and Forbeck penned a story that's very much in the spirit of the show. It's just unpretentious fun on an exciting and dangerous job. Far more than I expected from a TV tie-in novel and I'm looking forward to the next one, The Zoo Job (2013), which I probably will get to next month. A warning to the reader: avoid the reading the synopsis on the backcover of The Con Job, it gives away too much.

And to my fellow Leverage fans, if you enjoyed The Con Job for more than just a continuation of your favorite series, than I would like to draw your attention to Mack Reynolds' The Case of the Little Green Men (1951) – a comedic private-eye novel set in the world of SF-and Fantasy fans and features a loveable loser detective. He’s hired to by a bunch of oddball SF-fans investigate alien life on Earth, who have been taking potshots at them with ray guns or dropping them from flying saucers and the investigation takes him to an early SF/F con. It has been reprinted and I think if you liked The Con Job, you’ll love this one as well.

Yes. The blog-to-blog mystery evangelist never lets an opportunity slip through his fingers to harvest a soul or two.
Geplaatst door TomCat on 4/10/2013