A Town in Tumult

A few years ago, I picked up Phoebe Atwood Taylor's Death Lights a Candle (1932) and The Criminal C.O.D. (1940), after listening to some favorable reviews on Les Blatt's weekly audio pod cast, but they just didn't do it for me and forgot all about Mrs. Taylor – until I rediscovered Octagon House (1937) in the cavernous belly of Mt. To-be-Read. Hey, after Zelda Popkin and Kay Cleaver Strahan delivered the second time around, I judged correctly to give Taylor and her "Codfish Sherlock," Asey Mayo, another shot. 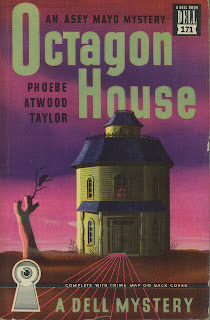 The town of Quanoment, Cape Cod's forgotten hamlet with a population of eight hundred, has been granted a new postal office with a mural from a local artist, Jack Lorne, but the town isn't thrilled. They recognize images of themselves in the mural and the depiction of the townspeople isn't exactly flattering. Plainly, it was Jack's wife, Marina, who put him up to it, and from the evidence, she was very adept at playing the role of killable murder victim – even though she never appears on stage herself. They room with Marina's father, Aaron Frye, whose spirit she broke, and her sister, Pam, at the titular house and it is Pam's precarious situation that brings her to the doorstep of Asey Mayo.

Pam found the body of her sister in the garage, stabbed with a pocketknife that belonged to her and Jack screaming at her that she has killed Marina and that he has called the police, but there are also the incriminating and fabricated statements spouted by Nettie Hobbs – a town gossip who soured when Pam protected her father from Hobbs' advances. There's also the problem of the hundred-pound lump of ambergris that Pam chanced upon the beach, and fought over with her sister, but has now gone missing and appears to be lugged around all over the place. These elements combined with the setting almost gave you the idea of tramping around in one of Dorothy Cameron Disney's mystery novels and Pam's plight gave it shades of John Dickson Carr's He Who Whispers (1946) 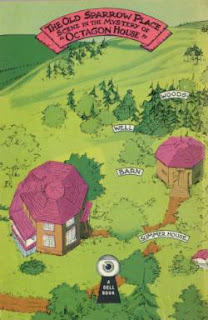 Speaking of Disney and Carr, my edition of Octagon House is a Dell Mapback and includes a "What this Mystery is about" and "Wouldn't You Like to Know" section and the latter one asked a question that I have to address: why and how Pam disappeared from the locked bedroom?

Octagon House is listed nowhere as an impossible crime story, however, chapters five and six include a disappearance from said bedroom, which was locked from the outside and the key in possession of Asey Mayo, and the window screens firmly hooked in place from within. I should also mention that Pam disappeared from the bedroom when Mayo had one of the Frye's lodgers as a visitor named Timothy Carr! It's more of an Easter egg than an actual challenge, but it was treated exactly the way it should've been for something as simple (and short) as that and the explanation was more than acceptable. I was also intrigued to find another one of these miraculous side distractions, which also occurred when Jeff Troy vanished from a dumb-waiter in mid-air in Kelley Roos' Ghost of a Chance (1947) and Madeleine Magellan evaporated from a watched room in the Jonathan Creek episode, Ghosts' Forge (1999).

I know, I keep coming back to locked rooms, but I keep running into them, even when I assume I'm reading a straight laced whodunit (see: Dead Man's Gift, 1936). It's a gift... and a curse.

To round this review up, I enjoyed Octagon House and the "Codfish" Sherlock a lot more a second time around, because this one wasn't written around a joke (and punch line) that I saw coming a quarter into the book (i.e. The Criminal C.O.D.) There was plotting and mystification woven around such imagery as people running around with a lump of ambergris, an eight-sided house with clock strewn walls, brewing town riot and even an airplane crash in town square. I have to admit, it's not perfect (figured out whodunit) and the ending chapters tended to drag a bit in parts, but otherwise, I was entertained.

The theme of 2013 definitely is redemption and perhaps I should consider taking another crack at Sjöwall and Wahlöö.