In League With the Devil

"This planet has — or rather had — a problem, which was this: most of the people living on it were unhappy for pretty much of the time. Many solutions were suggested for this problem, but most of these were largely concerned with the movement of small green pieces of paper, which was odd because on the whole it wasn't the small green pieces of paper that were unhappy."
-  Douglas Adams (The Hitchhiker's Guide to the Galaxy, 1979)

Emma Lathen was the nom de plume of economist Mary Jane Latsis and economic analyst Martha Henissart, businesswomen who switched branches in the early 1960s and exploited their insight knowledge for a string of mystery novels that ran well into the 90s. I've read various opinions on Lathen's work and the main consensus among connoisseurs gives the impression that their earlier books were the best, but otherwise, were prone to churning out uneven and sometimes needlessly complex mysteries – with the main appeal being the furnishing of the plot with corporate entities and financial shenanigans. 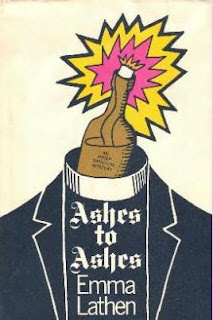 I was hesitant to dive head first into a disappointment and I may have hold Lathen off a bit longer, where it not for an old post on the GADGroup by Tom Schantz (from Rue Morgue Press infamy!) giving an honest defense on behalf of a pair of writers who did give me the impression of being genuine purveyors of whodunits. And after all, how bad can they have been, if Tom and Enid had to fight over who got first dibs on a new Lathen back when they first came out?

It still took Lathen weeks months years to reach the peak of Mt.-to-be-Read, but all of a sudden, there they were and I began to work my way through Ashes to Ashes (1971) – twelfth in the John Putnam Thatcher series.

The St. Bernadette's Parents League has been forcing a wedge between the community of Flensburg and the church over a bankrupt parochial school that a real-estate developer has made a multi-million dollar offer on the land – backed by a mortgage from Thatcher's Sloan Guarantee Trust. The league is determined to safe the school for the community, but their opposition is stubborn and the situation was heading for a stalemate.

Until Francis P. Omara, owner of a local funeral parlor, was relieved from his duty as the figurehead of the Parents League with a butcher's mallet and his murder throws a town already in uproar in disorder. Probably the most memorable scene is how a call for modernization of Catholicism by distributing birth control pills – resulting in an out-and-out riot. I was very tempted to title this post "It's clobbering time!"

Anyway, while Ashes to Ashes delivered on the business aspect of the story, it’s was not enough to carry the story on its own and I did keep losing interest in the plot, which was everything from mind blowing. Not even with a few bomb scares and an actual explosion thrown into the mix. There were clues that Thatcher explained, but they're hardly worthy of the epithet "America's Agatha Christie." If you want to draw a comparison, I would say Rex Stout. To put it simple, I found myself unable to care about most of what happened in this book, but individual opinions may differ – as they tend to do on Lathen.

But let the reader be warned: modern sensibilities might be strained or even disturbed by certain passages that rhapsodizes Wall Street (something they apparently do in every book) and depicts bankers in the act of protecting piles of money that smells fishy.  ;)

And I will give one of their earlier efforts a shot in near future.

Last but not least, I'm glad to report that I have received two packages that contain a fresh supply of murderous tales of bafflement and wonder.