"Time is a terrible thing, because it erases joys and pains at the same time."
- Gosho Aoyama

Coincidently, this is the third post in as many days that I'll be discussing a detective story, or rather a compendium of stories, from the comic book spectrum and you might have noticed that another Case Closed/Detective Conan review has been long overdue. 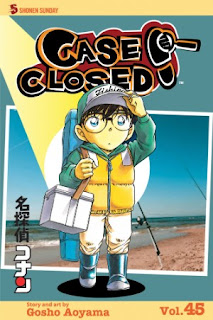 The 45th installment of this long-running series begins, as often is the case with this series, with a story that was set-up in the previous volume and this yarn fits in with another theme that's prevalent on this blog – seemingly impossible crimes! The setting is a high school where a student, Hosaka, tumbled down a flight of stairs to his death and his ghost appears to be playing malicious pranks on his old classmates. At the conclusion of the previous book, they found his desk in the school courtyard with a note on it that said, "I HAVE YET TO SETTLE MY GRUDGE," but the rain that had fallen moments before left the note bone-dry and the field of mud surrounding the desk was bare of any footprints.

Conan does an excellent job in pointing out the prankster among the group of friends and Aoyama worked with numerous tropes popular in Japanese (manga) mysteries for this one (e.g. scholastic setting with legends haunting the hallways and the avenger-from-the-past theme), but here, IMO, it resulted in one of the best examples I have read to date. I guess it's because it didn't result in a gruesome murder case and stayed on a human level that fitted the backdrop and characters.

Aoyama's art in Case Closed is always great to look at, especially when clues are abound, but it was here that it struck me how beneficial it can be for a story on an emotional level – because there's nothing that Hosaka's friends could have said that gave the reader more of a connection with him than showing his smiling face in class whenever they're talking about him. Much better than biography-approach you find a lot of contemporary crime and thriller novels.

The materialization of Hosaka's desk in the muddy courtyard carried the mystery aspect of the story, showing the strength of a well thought out, but non-violent, locked room gambit, but was also surprised to find out that it was practically the same explanation I had dreamed up for the no-footprints situation in William L. DeAndrea's Killed on the Rocks (1990). That was the only real good solution I ever came up with for the no-footprints situation. Oh, well.

Next up, Conan, Doc Agasa and the Junior Detective League take time to go on a fishing trip, and before long, they find themselves enmeshed in another case that has all the earmarks of an impossible crime: an angler sitting on his regular fishing spot, a pile of tetrapods sticking far out of the water, is found more dead than alive and foul play is suspected. However, nobody approached the man until they noticed that something was up and while he's rushed to the mainland, Conan is unsnarling the events of that day. Aoyama packed a nice bag of tricks for this volume and his solution is rather ingenious, but risky, method for poisoning someone from a distance – a versatile mind to be sure and one that should please a lot of my fellow mystery enthusiasts, if they ever decide to pick this series up. But be warned, it take six to seven volumes before the stories become really good.

Anyway, the third case is an out-and-out homage to Columbo and just about as enjoyable. Richard Moore is invited to come to Okinawa for a TV conversation with Toshizo Nose, a famous baseball player for the Jaguars, and the moderator is a former teammate and sports reporter – Motoyama, who harbors a grudge against Nose. A grudge that drives him to murder and constructs a cast-iron alibi to get away with it. Conan pops up every now and then to ask pesky questions, before he has given him enough rope to hang himself.

Finally, we are treated to a three-chapter story that will be concluded in the next volume and involves astronomy, an outstretched forest that hide a skeleton and a dying message, invitations from a missing man and a fresh corpse.
Geplaatst door TomCat on 4/07/2013