Cartoonist in a Tailspin

"Something didn't seem right. There was something about the whole set-up that smelled like someone else's hydrant."
- Ace Hart (Dog City, 1992-94)

When the founder of Whitcomb Feature Syndicate, Big Bill Whitcomb, passed away the general-manager, Mark Wallis, inherited the responsibility to keep the business afloat that, in turn, keeps the vultures that were circling his sickbed in luxury and comfort. The only honor they give to their late benefactor is an annual diner to commemorate his birthday, which went well for nearly ten years, until their star cartoonist, Zeke Brock, made a drunken scene and the family has summoned Wallis before the next diner – and thus begins Jack Iams' Death Draws the Line (1949). 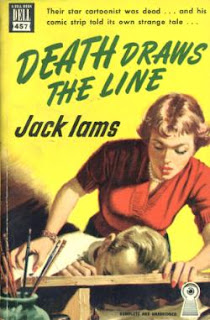 Zeke Brock is the creator of the Little Polly Pitcher comic strip and alcohol was his poison of choice, which seems to have done him, after Wallis planned to let him sleep for a couple of hours before towing him to the party. However, Wallis' becomes suspicious when Brock's will, leaving the copyright to his assistant, Mary Bradley, appears to be missing and ask a befriended D.A. for an autopsy – much to the chagrin of the acid-tongued and scandalized Widow Whitcomb. Of course, the fact that the autopsy showed that Brock was drowned (!) was not enough for Wallis to hold on to his job, because he neglected to put the interest of the company and the family on the first place.

Unfortunately, the snobbish, childish and decadent manners of the Whitcomb family pretty much sets the tone for the book and Iams appears to have been determined to drive home the fact that they're wicked people. Instead of following up on an interesting premise, Wallis has to endure the wrath of the Widow Whitcomb, tangle with her nymphomaniac of a daughter, Pamela, who's seen by Wallis approaching men in a dim-lit street, wrestle a gun from her brother Fenwick and knocks out with his former simpering assistant, Henry Parfield, who perhaps hopes to marry into the family. There are also sappy love feelings boiling between Wallis and Mary Bradley and a second murder, in which Wallis briefly becomes a suspect, to distract from the story.

It’s not like the murder of Zeke Brock is completely delegated to the background, but a lot of details were lost that could've made for a better story and not only in regards to the plot. Through out the story there are mentions of Avenge Polly Pitcher Clubs and movements popping up all over the country and you could have peppered the story with newspaper snippets (perhaps from one or two Rocky Rockwell's The Record?) of their activities. Yes. It would have still been padding, but it would've been more fun than what we actually got. There was also no background on the comic book industry of the 1940s. The murder of Brock also had some confusing points. None of the police involved seemed to give much thought on how the murderer entered the premise. Was I reading a locked room mystery or not? It was mentioned that Brock gave keys to practically every woman he ever slept with, but that was never looked into. Even after a suicide attempt takes that may be a botched attempt at murder takes place there. Somehow, someone got in... yes... that's a remarkable feat of deductive reasoning, detective. Why don't you go to a Coffee-and-Donut store and sit this one out.

The only point of genuine interest was the batch of missing Little Polly Pitcher comic strips and they were actually included in this book, drawn by Roy Crane, and they tell you what you probably suspected all along, but it’s a nifty gimmick nonetheless. I can only see this book of being of interest to scholars looking into the visual elements in detective stories. In short, Death Draws the Line was not just a step down from previous books I have read by Jack Iams, like The Body Missed the Boat (1947) and What Rhymes With Murder? (1950), but a suicide dive off a cliff and I think that is a wish we should respect and leave it at that.

Oh, and I know it's folly to post two reviews on the same day, so if this is the first time today that you decide to take a peek at this blog, you might also want to take a look at my rundown of the new Jonathan Creek special, The Clue of theSavant's Thumb (2013), which aired last night. The tone of that review is also a bit more on the positive and upbeat side. I hate
Geplaatst door TomCat on 4/02/2013