Philip Harbottle is the editor, writer and literary agent who has written extensively on an amazingly productive, pulp-era mystery and science-fiction writer, John Russell Fearn, whose voluminous bibliography has a complicated, maze-like publication history – strewn across numerous genres, publishers and an infantry of nom de plumes. Harbottle has learned how to navigate this maze over many decades and told me the story of an unpublished, presumably lost manuscript. A presumably lost detective story that may be in print today! 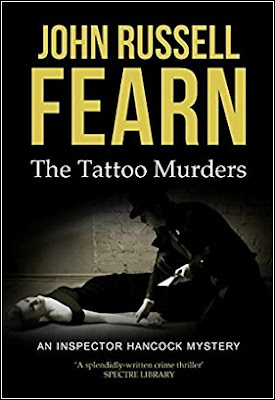 In 1947, Fearn wrote to a writer friend "to say that he had completed a detective novel," entitled Partners in Crime, on which nothing is known beyond that the manuscript was "promptly sold" to an Indian publishing house. Harbottle has spent years trying to find if it had ever been published in India, but was never able "to make contact with any Indian biblio buff" to verify or dispel this possibility.

So it looked as if the manuscript was either lost or had an extremely obscure existence in India. And than he stumbled across a copy of one of Fearn's many little-known detective novels.

While reading Murder's a Must (1949), Harbottle noted that the book-title didn't fit the story and had probably been altered by the publisher ("a common practice at the time"), but Partners in Crime actually "fits the storyline perfectly" – deciding they were the same story and gave up on trying to find it in India. Some time later, Harbottle arranged to have Murder's a Must/Partners in Crime reprinted by Wildside, but they insisted the title to be changed to The Tattoo Murders. Last year, it was reprinted a second time, as an ebook, by Endeavour Media.

The Tattoo Murders opens on a similar note as Except for One Thing (1947) with Derek Cantrill attempting to break his engagement with Vera Bradmore, who's known to the customers of her Gown Salon as Madame Luchaire, but hardly everone knew she came from "the London gutter" of the East End. Cantrill has met a charming, educated and refined society woman, Mary Hilliard. However, Bradmore has no intention to get rid of her big diamond engagement ring and threatens to drag him into a courtroom for breach of promise. A second plot-thread introduced in this is chapter concerns the head saleswoman of Gown Salon, Claire Wilton, who was unceremoniously dismissed by Bradmore. Wilton warned her that she hasn't heard the last of this.

When Bradmore arrives at her home, a dark shadow comes into the apartment through the window and asks her about the whereabouts of her two sisters, who are triplets, after which she's smothered to death with a pillow and has her pajama ripped apart – revealing the name "MARY" tattooed on her back. A medical examination showed that "the tattoo was put on Vera's back in her childhood." It's an intriguing premise, to be sure!

Divisional Inspector Davidson grapples with the case for a while, but eventually has to hand it over to "a queer sort of chap" from Scotland Yard.

Chief Inspector Hancock is a gimmicky policeman very much like the brick-red complexioned Chief Inspector Douglas Gossage from The Crimson Rambler (1947). Hancock is an easy going man who likes "to talk more about gardening than anything else," but by the time he had gone, suspects or witnesses had told him "everything he wanted to know." Some criminals had assumed he was a fool, misled by his easy going geniality, but they were doing years in the cooler for "underestimating the enemy." Hancock is a pretty bland character and only there to play the role of detective, however, he plays that role decently enough. And even deduces the gender of the murderer long before identifying this person. So, The Tattoo Murders is not really limited by its flat characterization, a common weakness in Fearn's detective stories, but that this time he was unable to deliver on any of the good or promising ideas he introduced – from the coded tattoos to teasing an impossible crime. I'm being very kind by referring to the three tattoos as a code. The triplets were tattooed as little girls by their father, but you have to be pretty close to a single digit IQ to tattoo such as simple and general reminder on your own children. Why? Now if there had been tattooed lines, along with the names, forming a map when overlaid or placed next to each other that would have made all the difference.

Unfortunately, this was not the case, but I did liked the final lines of the book that resolved this plot-thread.

A second, unfulfilled promise was the murder of the second sister, Elsie Jackson, who was found drowned on the beach without any footprints around the body, but Hancock almost immediately destroyed my hopes for an impossible crime. A good, well thought out no-footprints-in-the-sand puzzle, wedged in the middle of the book, would have probably elevated this otherwise average, second-string detective novel into at least a title-of-interest for fanatical locked room readers. Fearn's clumsily handling of one of the primarily clues was adorable, but telegraphed the murderer's identity the moment it was introduced, because the reader has seen the murderer at work – making this a rather unsuccessful detective story.

And on a slightly unrelated note, how is it possible that the husbands of two of the sisters either had only glimpsed their tattoo by accident when swimming or completely unaware of it? Did they still have bed sheets with holes in them in the late 1940s?

Still, I enjoyed my time with this relatively short, briskly written crime story, which stands closer to Lonely Road Murder (1954) than any of Fearn's purer detective fiction. I suppose you have to be fond of Fearn to enjoy his lesser work like The Tattoo Murders. So a fairly minor novel recommended to readers of Fearn or pulp mysteries.

But wait, there's more! I'm sure a very specific segment of my readers have impatiently waited for me to finally bring up Shisei satsujin jiken (The Tattoo Murder Case, 1948) by Akimitsu Takagi. There's more to this comparison than just a passing resemblance between the book-titles, but it's impossible that one could have influenced the other. That being said, it surely is interesting that two mystery writers, one in England and one in Japan, wrote novels around the same time about a father who tattooed their three daughters. But that's where the similarities end. Most notably, the books display very different attitudes towards tattoos. The Tattoo Murder Case is deeply entrenched in the Japanese world of tattoos, which are deeply ingrained in the cultural and historical backdrop of the story. It's a world were tattooed skin of dead people are collector items. And on the other hand, the tattoos in The Tattoo Murders are merely a feature of the plot. Hancock even remarks "no woman would ever allow her back to be disfigured with a tattoo."

So there you have it. Two books, written around the same time and idea, but worlds apart. This is why even an average, second-string mystery can turn out to be a rewarding read.
Geplaatst door TomCat on 3/02/2019