"Life is like a train, Mademoiselle. It goes on. And it is a good thing that that is so."
- Hercule Poirot (Agatha Christie's The Mystery of the Blue Train, 1928)

John Russell Fearn was an astoundingly prolific writer of detective stories, science-fiction and westerns, who had his roots in the British pulp magazines of his days, which means that his name is not synonymous with literary respectability, but this second-tier wholesaler of pulp-fiction has wormed his way into my heart. You might have noticed that yourself by the growing amount of reviews of his work. 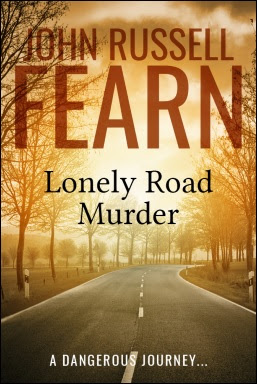 As a mystery novelist, Fearn earned my endearment with an obvious love for (webwork) plotting and a drive to be as original as possible, which resulted in a wildly varied catalog of crime-fiction that ran the entire gamut from hybrid mysteries to scientific detective stories – published under as many pennames. Some notable examples include a first-rate inverted mystery (Except for One Thing, 1947) and a Carrian-style locked room mystery (The Five Matchboxes, 1948), but he also penned a short precursor to the contemporary crime novel in the mid-1950s.

Lonely Road Murder (1954) was originally published under one of his legion of pennames, "Elton Westward," which (surprisingly) lacks all of the bells and whistles usually adorning the plots of his detective stories.

So you won't find any great detectives, locked rooms, alibis or the diabolical application of science in order to make someone vanish from the face of the earth here. Instead, the book offers a very short, straight-laced and uncomplicated crime story that I did not expect from Fearn.

Lonely Road Murder is narrated by Rosemary "Rosie" Lennox and she lives a simple, but happy, existence among the people who she really cares about. Rosie is romantically involved with her boss, Stephen Lane, who singled her out when he was "practically knee-deep in beauties" and they succeeded in keeping everyone at the office in the dark – preventing any kind of work floor gossip. She also on friendly terms with the people who live in her flat. Bob McDonnell is high-spirited, budding author who loves to tease Rosie and she usually hurls some good natured abuse at his head ("temper, temper"). Elly Moreland is her next door neighbor and a friendly, plump woman who had mothered Rosie the day she had moved in.

Rosie is also on friendly terms with a married couple, John and Mary Francis, who occupy one of the ground-floor apartments and they work in a small nightclub as vocalists with Les Roberts' Band, but John has been quarreling with Mary over her being "too friendly" with their boss – resulting in him storming out of the apartment.

So a relatively normal, everyday collection of people who have their fair share of common, or even petty, problems to keep them busy. You often encounter such regular, often working class, characters in Fearn's work. Such as the cinema employers in One Remained Seated (1946) and the modest, slightly middle class, family from Death in Silhouette (1950). Fearn appears to have been better at writing about down-to-earth people than about the upper classes (e.g. The Crimson Rambler, 1947) or eccentric characters (e.g. Adam Quirke from The Lonely Astronomer, 1954). Anyway... 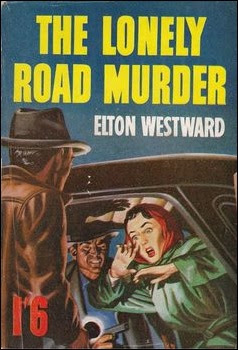 One foggy evening, Rosie returns home from a date with Stephen and notices, to her surprise, the door of John and Mary's flat was open. When she goes inside to inspect she finds the huddled, prone figure of Mary on the bedroom floor with finger marks on her throat.

The minor police presence in Lonely Road Murder comes in the guise of "a queer bird-like appearance," named Inspector Nevil, who is mighty suspicious of the victim's husband, John. A suspicion that's both understandable and completely justified when John apparently committed suicide, gassing himself to death, but a post-mortem examination revealed "a large quantity of laudanum" in the body – which turned this murder/suicide in a double homicide. However, this is also the point where this already short novel, of merely eight chapters, had completely ran out of steam.

At this point in the narrative, my impression that Fearn began to struggle to finish writing a crime story without a solid plot or even a central problem to concentrate on. There are some minor concessions made to the traditional detective story, such as when Rosie went over the crime-scene and questioned the band leader, but the explanation is reached when she accidentally stumbles across it. And places her in the clutches of a slightly unhinged killer.

Obviously, the books Fearn wrote under the "Elton Westward" byline must have been commissioned by the publisher, who probably wanted some of those newfangled crime thrillers, because this is not the type of story that must have been fun for him to write. However, it was mercifully short and the story makes for interesting material to compare with his more plot-driven detective novels.

One thing that amused me about Lonely Road Murder is how Fearn seems to have been considering the possibility of turning the murder of John Francis into a full-blown locked room mystery, but probably decided against it on account of the nature of the story. However, the way in which they had to break into the gas filled room sure as hell promised a good, old-fashioned locked room murder.

So, all in all, Lonely Road Murder was off the beaten track for Fearn and not a book I would recommend to readers who are new to his work, but eventually it might be an interesting read to see what happens to a plot-driven mystery novelist when you take his bag of tricks away. And it was short enough not to be excruciatingly disappointing. Only thing that really annoyed me was the final scene that resolved a romantic sub-plot, but it was embarrassingly childish. Act your age, Mr. Fearn! Act your age!
Geplaatst door TomCat on 5/21/2017