"Politics makes liars of us all, Lieutenant."
- Joe Devlin (Columbo: The Conspirators, 1978)

Frans and Tineke Steenmeijer's Moord in het provinciehuis (Murder at Provincial House, 1999) originally appeared in the Frisian language, as Moard yn it provinsjehûs, followed in 2001 with the publication of a Dutch edition and can therefore by categorized as a streekroman (regional novel) with the northern province of Friesland (Frisia) as a backdrop – which probably explains how the book managed to elude me until recently. But when I came across the book and read the plot description, I immediately recognized the characteristics of a potential impossible crime story. 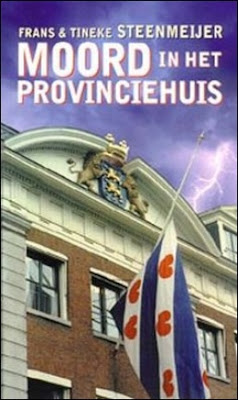 According to the synopsis, the story concerns the murder of a provincial politician, shot through the heart, during a meeting of the College of Deputies in a room closed from the outside world. A brief internet search lead me to a website, cataloging Dutch crime-fiction, mentioning that the book opened with "a pleasant, old-fashioned locked room mystery."

So my curiosity was duly aroused and wanted to know whether Murder at Provincial House qualified as a genuine locked room novel or simply dealt with a murder committed in a closed-circle of suspects, because the two are often conflated with one another. Well, it turns out the plot worked with both tropes.

Murder at Provincial House opens during one of the regular assemblages of the college of the Gedeputeerde Staten van Friesland, but the rituals and routine of the gathering is disturbed when, during a talk on spatial planning, "a strange plop" is heard and one of them slumps back in his chair – a growing bloodstain on his shirt. Someone has shot Fons van Thorn, while everyone sat around him, but nobody in the room could possibly have discharged a gun without being seen. And a search of the premise failed to produce the proverbial smoking gun.

It's as if the bullet came out of nowhere and the problem of an inexplicable death in a closed, and watched, room in which several witnesses were present was reminiscent of Max Afford's The Dead Are Blind (1937) and E.R. Punshon's Six Were Present (1956). But the locked room angle here was rather quickly disposed off.

During the second chapter, one of the people present in the room notices, what could be called, a clue and the impossibility is fully explained when the third chapter rolls around. Obviously, this altogether too slender plot-thread was inspired by Havank's "De vergrendelde kamer" ("The Bolted Room"), collected De Schaduw & Co (The Shadow & Co, 1957), which I happened to have reviewed here only a fortnight ago, because the authors are apparently great admirers of Havank – an enthusiasm shared by their own series-character, Rijksinspecteur Doede Deschesne. So they probably got the idea for the locked room from that short-short story and tweaked it a bit.

Understandably, I was disappointed that the book stopped being an impossible crime by the end of the second chapter, but the explanation showed the killer had knowledge of both the layout of the historic building and movement of the people. Since the crime-scene was a government building and all of the potential suspects were elected representatives or government employees the investigation is given to a special investigator of the Rijksrecherche (state police), Doede Deschesne.

Deschesme has his work cut out for him. The victim was the dictionary definition of an infant terrible. A personality trait not everyone around him found endearing.

Fons van Thorn was a gynecologist who retired early and, "more or less as a joke," began his own political movement, under the banner of the Gezond Verstand Partij (Common Sense Party), which pulled seven seats underneath the political establishment in previous provincial elections – allowing him to become the Deputy of Environment and Housing. Something that earned him the ire of one of his colleagues, Anna Kup-Boltini, who's fanatical environmentalist and wanted the position to reshape local policy. But he also has a sworn enemy within his own party, Abel Hondelaar, who had been plotting a coup d'état.

And there there are the personal motives. Van Thorn was a known philanderer and his latest conquest was a young girl from the finance department, Wiegertje de Groot, which put an end to her relationship with Wigle Adema. They were planning to move in together, but then Van Thorn appeared on the stage. So this gives the young man a potential motive and he does not exactly go out of his way to give Deschesme the idea he's barking up the wrong tree.

All of this, and more, has to be sorted out by Deschesme and his capable assistant, Henri Dulder, who loves Columbo and sometimes couldn't resist to imitate the famous TV-detective. So this makes for a pleasant read and the story-telling nostalgically reminded me of the glory days of A.C. Baantjer, but with a plot that appeared to be moving along the same lines as the excellent police-detectives by M.P.O. Books and the Commissioner Daan Vissering series by Cor Docter.

Sadly, these positive attributes did not extend all the way to the solution. The murderer was revealed to be a minor character, which is not necessarily a bad thing, but the only tangible clue pointing in this direction was a slip of the tongue. Something that's even harder to spot when you learn about the weak, wishy-washy motive of the murderer. There were a plethora of legitimate suspects with genuine motives, but the authors went for the most underwhelming combination of the two. So that was a bit disappointing.

There was, however, a possibility for a clever, Agatha Christie-style solution using the disputed alibi of one of the suspects. A different combination of people, involved with the alibi, would be required, but it would have given the story a splendid and satisfying solution in the Golden Age tradition.

So, all in all, Murder at Provincial House has some first-class story-telling, but the plotting was less than perfect and the ending was underwhelming. A pity since the book had all the potential to be one of those rare Dutch detective novels that could stand toe-to-toe with its foreign counterparts.


On a semi, related note: my fellow locked room connoisseur, "JJ," wrote a blog-post, titled "A Little Help for My Friends – Finding a Modern Locked Room Mystery for TomCat Attempt #1: Murder in the Oval Office (1989) by Elliott Roosevelt," which weirdly synchronizes with this review. The plots of both books deal with the impossible shooting of a politician inside a secured room of a iconic government building, but Murder in the Oval Office also has a Dutch connection as the author and the detective, Eleanor Roosevelt, were Dutch-Americans. You would almost think we planned this, but we were both unaware what the other was reading.

I wish Patrick was still around to point an accusatory finger at the mischievous ghost of Harry Stephen Keeler.
Geplaatst door TomCat on 5/28/2017