Earlier this month, I reviewed Family Matters (1933) by Anthony Rolls, which took an unconventional approach to telling an inverted detective story and the narrative had all the elements of a genre-classic, but was unable to sustain itself and ended with a whimper – an open-ending that managed to be simultaneously lazy and pretentious. So hardly a satisfying and rewarding read. However, the book made me reflect back on similar detective novels that were on their way of becoming (minor) classics, but slipped with the finish-line in sight.

It has been a while since I slapped together a filler-post and thought doing a quick rundown of a handful of them would make for a nice fluff piece. You may abandon this post, if you want, and come back for one of my regular review, which should be up within the next day or so. Or stick around. It's entirely up to you. 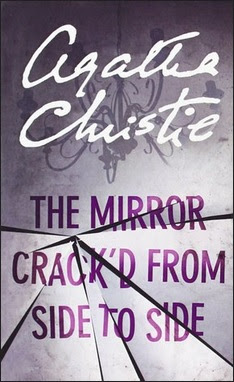 I'll be running through this short list in non-specific order and will begin with Agatha Christie. Or rather with an observation about one of her series-characters, Miss Jane Marple, who's one of Christie's two iconic detective figures, but there's remarkable difference between the Miss Marple and Hercule Poirot series – namely a severe lack of classic titles in the former. Miss Marple never handled a case of the same caliber as Murder on the Orient Express (1934), The A.B.C. Murders (1936) and Death on the Nile (1937). However, there's one Miss Marple novel that came close to matching the brilliance of her Belgian counterpart.

The Mirror Crack'd from Side to Side (1962) has an American starlet of the silver screen, Marina Gregg, descending upon the sleepy village of St. Mary Mead, but soon learns that an English village can be as dangerous as a dark, grimy back alley in the States. One of her house-guests dies after drinking a poisoned cocktail and the explanation for this specific murder was one of Christie's last triumphs.

The relationship between the victim and murderer, combined with the powerful and well-hidden motive, stuck together with simplistic brilliance, but the equally powerful effect the explanation could've achieved was ruined when Christie allowed the murderer to become completely unhinged – committing several additional murders along the way. It cheapened and lessened the impact of the reason behind the first murder, which robbed the series of a book that could've stood toe-to-toe with such Poirot titles as Peril at End House (1932), Sad Cypress (1940) and Five Little Pigs (1943).

Logically, the murderer should've been stone cold sane, completely unrepentant and never went pass that first murder, which had a solid, original and very human reason behind it. I've always wondered if a much younger Christie would've made the same mistake. A textbook example that sometimes less can be more.

You can also ruin a potential series-classic by punctuating the plot of the story with sheer stupidity. Case in point: The American Gun Mystery (1933) by Ellery Queen. 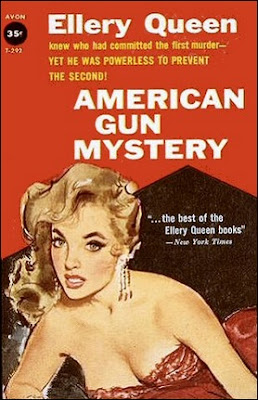 The American Gun Mystery had all the potential to be one of the best entries from Ellery Queen's plot-orientated nationality series, which has a great premise and a memorable backdrop: a sports arena, the Colosseum, where a horseback rider is gunned down during a rodeo show with twenty thousand potential suspects and eyewitnesses in attendance – topped off with the impossible disappearance of the murder weapon. I distinctly remember how much I had been enjoying this slice of old-fashioned Americana, presented as an original puzzle detective, but all of that enthusiasm dissipated upon learning how the gun was made to vanish. It was one of those rare instances I actually wanted to fling a book across the room in frustration and the hiding place of the gun seems to be a stumbling block for most readers.

And that's why The American Gun Mystery is never mentioned in the same breath as The French Powder Mystery (1930), The Dutch Shoe Mystery (1931) and The Greek Coffin Mystery (1932).

Sometimes you can be on the right track, but simply bite off more than you could chew and a good example of this is Herbert Brean's still beloved Wilders Walk Away (1948).

Curt Evans described the plot of the book as "a fusion of Ellery Queen and John Dickson Carr," which is an apt description, because the story is basically one of Queen's Wrightsville novels as perceived by Carr. The protagonist is a freelance photographer, Reynold Frame, who travels to Wilders Lane, Vermon, which is named after the founding family of the place. A family with a peculiar tradition dating back to eighteenth century: members of the Wilders clan have the tendency to escape the yawning grave by simply vanishing into thin air.

So what's not to like, you might ask? Well, the solutions to all of the impossibilities have some of the most routine, common-place explanations you could imagine. It stands in stark contrast with everything that came previous in the book. Barry Ergang hit the nail on the head, in his review, when observing that Wilders Walk Away appeared as "a companion to The Three Coffins (1935) and Rim of the Pit (1944) for ultimate greatness," but that "degree of feeling didn't sustain itself" and that's how I felt when reading the book. A very likable and readable detective story, but the wasted potential is painful to behold. Everything about the book screamed classic... until you reached the ending.

Brean would go on to redeem himself with the superb Hardly a Man is Now Alive (1952), the equally good The Clock Strikes Thirteen (1954) and the very amusing The Traces of Brillhart (1961), but they (sadly) never garnered the same attention as Wilders Walks Away. 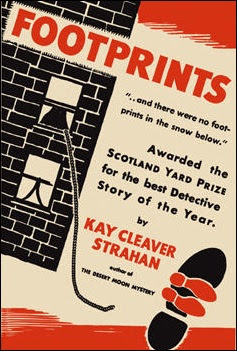 Finally, I have a prize-winning book, Kay Cleaver Strahan's Footprints (1929), which could have become a personal favorite of mine, but shot itself in the foot in a way that's very similar to Rolls' Family Matters.

Footprints garnered some attention upon its publication for toying with conventions and plot-devices that were not very well established or popular at the time. One of them is that the book qualifies as a semi-historical mystery novel and this past story is entirely told through a series of old, crumbling letters. A story that took place on an Oregon farm in the early 1900s, which has, rather originally, a murder that could one of two types of impossible crimes: either the murderer escaped from a locked room to get to the victim or passed over a field of snow without leaving any footprints.

So you can imagine I was completely hooked by the halfway mark. I loved the depiction of family life on an American farm in the early twentieth century with an apparently innovative impossible crime plot at its core, but the vaguely written ending only hinted at the murderer's identity. And not a single letter was wasted on attempting to explain the impossible situation. A postmodernist would no doubt love such an ending in a structured genre like us, but I wanted, as Carr would say, strangle the author and lynch the publisher. They were really lucky they had already kicked the bucket when I finished the book.

Cleaver did redeem herself with her second locked room novel, Death Traps (1930), which was a competent, if rather conversational, piece of work with an actual ending!

So far my lamentations on several detective novels I really wanted to like, but proved to be a let down, in one way or another, when the final chapter rolled around. I hope this will be, for now, the last blog-post with my whining about bad or disappointing detective stories. My next review looks to be that of a good mystery novel and have something interesting (and untranslated) for the one after that. And both of them fall in the locked room category. Please try to act a little bit surprise about that!
Geplaatst door TomCat on 5/10/2017