Only a year or two ago, Richard Hull was dimly remembered as the author of an unconventional inverted detective story, The Murder of My Aunt (1934), but the rest of his work remained in the shadows of obscurity until the British Library and Agora Books began reprinting his lesser-known work – such as Keep It Quiet (1935), Murder Isn't Easy (1936) and Excellent Intentions (1938). After half-a-dozen reprints, Hull emerged as an innovator of the inverted detective story and arguably one of the most popular rediscoveries of the present renaissance of the Golden Age mystery. Honestly, I wouldn't be surprised if he turned out to be more popular today than during his own lifetime. 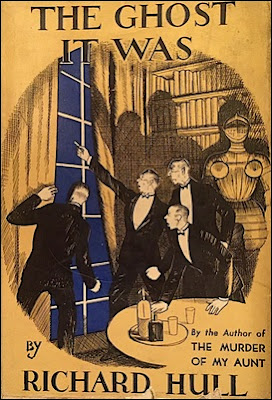 Hull has regained his reputation as an experimenter and innovator of the inverted mystery, but he has also tinkered with the conventions of the traditional detective story. And that book was reprinted last year by Agora Books.

The Ghost It Was (1936) has been described as an homage to John Dickson Carr and black comedy in the best English tradition, but, this time, there are quite a few contrarians and Steve, of In Search of the Classic Mystery Novel, posted a less than exciting review in January – on which two people commented that they were unable to finish the book. So how good, or bad, is The Ghost It Was? Well, let's find out.

Gregory Spring-Benson is a man of "unlimited effrontery" with "exclusive and expensive tastes," but his bank balance was insufficient to meet the demand of the ever growing stack of unpaid bills and he has been unable to hold a job. As a previous employer remarked, "perfect idleness and sarcasm" are poor substitutes for more humdrum, but useful, qualifications. So he decided to up his "debonair frankness," combined with "a pose of specious honesty," to obtain an introduction to Linnell, deputy sub-assistant editor of The New Light, who sends the impertinent Gregory packing.

However, Linnell tells Gregory that, if he happens to have any ideas for a story, he can send it to him personally and an idea is presented when reading a poorly written column in The New Light.

The column reports that a well-known, international financier, Mr. James Warrenton, has returned to his ancestral village, Amberhurst, where he has purchased a mansion with "a private ghost" haunting the tower standing at the north-west corner of the house – who happens to be Uncle James to Gregory. Unfortunately, Uncle James has told his insufferable nephew to never darken his door again. So he has to find a way to worm his way back into his uncle's household and Warrenton, who's as impudent as his nephew, makes a sporting bet with Gregory. He gives Gregory six months to swindle him out of "an appreciable sum of money" using spiritualism.

I suppose this is where the story began to lose the previously mentioned commentators, on Steve's review, because the plot began to drag here. Don't get me wrong. This is a well-written, darkly comedic detective story, but the main plot was barely moving after this point and instead we got a closer look at the characters and some of their schemes, which eventually result in murder. But it takes a while to get there. I think it was a mistake to compare The Ghost It Was to Carr, because the similarities (impossible crimes, a haunted tower and ghost stories) are only superficial and not even Hull could match him in the plotting department. In my opinion, the book is much more black send-up of Edmund Crispin (c.f. Buried for Pleasure, 1948) with a hint of evil and full of wittily couched insults, verbal digs, unpleasant or downtrodden relatives and even a scheming parson. So, if you're going into this book expecting a Carrian pastiche, you'll end up disappointed or even giving up before reaching the final chapter. The reader has been warned! 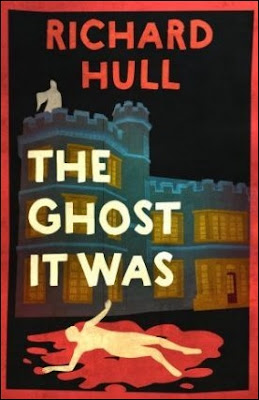 Around the halfway mark, the plot begins to roll again and the people at the mansion witnessed a figure, who seemed "to emanate a radiance," on the tower "clad in a gown" and a short sword or dagger, which glowed, hung from "a ribbon that seemed to be attached to the waist." When this figure appears for a second time, Warrenton recognizes the ghost as one of his relatives and bursts out laughing, but suddenly, another figure came along the top of the turret with it's "right arm stretched out menacingly" and the other figure plunged to his death – a scene eerily reminiscent of the tragic ghost story from 1535. This is only quasi-impossible murder, but the second death on top of that haunted tower is indisputably a locked room mystery.

One of the household members, Emily, notices a strange gleam on the top of the tower from her bedroom window, moving backwards and forwards, before realizing it was either a dagger or a knife. A floating weapon that plunges itself in the only person who was standing on the tower, but here's the real kicker. Everyone was locked into their rooms to prevent them from playing the ghost. These two (impossible) murders were superbly handled, a nice spoof of the theatrically-staged murder mystery, which had a nice, uncomplicated solution with a beauty of a clue subtly foreshadowing the trick the murderer used on the tower. A clue actually worthy of Carr himself.

Regrettably, the way the final chapter was handled made the solution fall flat on its face and this was completely unnecessary.

Obviously, Hull was a writer who tried to be innovative and decided to do this, in this very conventionally structured detective novel, in the last chapter by not mentioning the murderer by name. Now this could have worked had the murderer not been so obvious and the reader had to pay close attention to find all the clues to piece together who they were talking about, which certainly was not the case here and this made Hull look like he was being difficult for the sake of being difficult – reflecting poorly on an otherwise pretty decent country house mystery.

In closing, The Ghost It Was is a good, but not great, detective story drenched in black humor, ghostly murders and an excellent portrayal of a dysfunctional family who dance to the purse-strings of the family patriarch. Only the unnecessary and irritating obfuscation about the murderer's name in the last chapter is a real blemish on the plot.
Geplaatst door TomCat on 3/25/2019