Richard Henry Sampson was a veteran of the First World War, serving in France for three years, before he began an inauspicious career as an accountant and this career was cut short when his first novel, published as "Richard Hull," became a success – a witty inverted detective novel titled The Murder of My Aunt (1934). A further fourteen comical, character-oriented crime novels appeared, published between 1935 and 1953, but they had been largely forgotten by mystery readers. 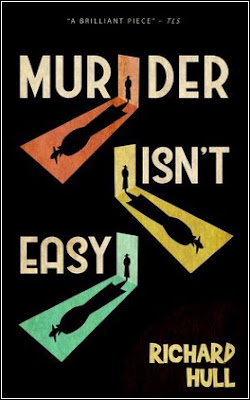 Hull was only remembered as the author of The Murder of My Aunt and readers usually confused even that one with C.H.B. Kitchin's similarly titled Death of My Aunt (1929). However, this has recently began to change as Hull's work is slowly being rediscovered.

The Poisoned Pen Press, under the banner of "British Library Crime Classics," reissued The Murder of My Aunt and Excellent Intentions (1938), while Ipso Books republished Murder Isn't Easy (1936). And they have announced on their website that more releases from Hull are coming soon! So we can say that Hull is beginning to enjoy the perks of the present Renaissance Era, but is Murder Isn't Easy worthy of all the praise heaped on it by my fellow reviewers (here, here and here)? Yes. It does.

However, I have to caveat the yes by mentioning that the book will probably fail to excite readers who prefer their murder, or murders, to occur early on in a story, because this is one of those mystery novels with a slow build towards the murder – hardly even resembling a detective story during its first half. The first half reads like a lighthearted, office comedy with a dark underbelly and with all the events taking place inside an advertising agency it almost feels like a British TV-series like Yes, Minister.

Murder Isn't Easy is largely narrated by the three principal players of the story, Nicholas Latimer, Paul Spencer and Sandy Barraclough, who made their biggest mistake of their life when they decided to go into business together.

The book has an unusual structure, consisting of four diary entries, which begins with the longest account written by the copy-writer of NeO-aD, Latimer, who presents himself to the reader as the unrecognized, downtrodden genius of their floundering agency. Latimer lays the blame of their failings at the feet of his partners, but has a particular grievance with Spencer and holds him responsible for losing the Flaik-Foam advertisements. And, as it becomes very clear, the personalities of the three partners are completely incompatible.

The tensions slowly begin to come to a head when Latimer has a chance encounter with a prospective client, M. Tonescu, who's a Romanian claiming to have discovered "a process by which glass would not become clouded by steam or heat" and water runs off it quickly – which he wanted to sell to the cleanly British to keep their bathroom mirrors unfogged. Latimer saw a more practical use, namely the windscreens of cars, but Spencer and Barraclough professed skepticism. Once again, Spencer is seen by Latimer as the main obstacle to his great plans. 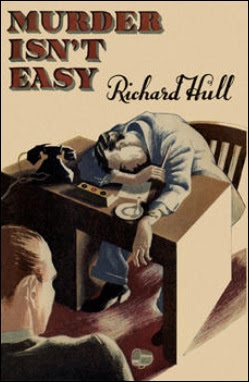 So he begins an ill-fated series of attempts to get rid of Spencer by trying to vote him off the board and offered to buy his share in the agency, but "every legal method had been attempted" and all had failed. The situation demanded a drastic solution and murder, with all its complications, entered the picture.

After this point, it becomes hard to describe the plot without giving anything away, but how the story and chapters were structured were a pleasure to read. All of the subsequent accounts throw a different light on the previous narrative and reveal that the narrators were not exactly how they presented themselves. Or that their plans were not as water-proof as they envisioned, which kept the story one step ahead of the reader by twisting it around with each narration. You can gauge roughly what's really going on and what's going to happen, but not entirely and that made for a fun, engrossing and surprising detective story.

Interestingly, the way in which two of the partners were murdered, on the same evening, recalled the plotting-technique of a personal favorite, Christopher Bush, who (sort of) specialized in maze-like plots that linked a double murder, committed in close proximity in time and place, together – e.g. Dead Man Twice (1930), Dancing Death (1931) and The Case of the April Fools (1933). You can chalk that one down as a definite plus.

So this was a very short post, but there's not more that I can say without treading into spoiler territory, because every section of the story has developments and twists that you have to read and discover for yourself. It makes the book more fun.

Murder Isn't Easy is a character-driven, darkly comedic (semi) inverted detective story, but the plot is surprisingly satisfying as it twist and turns in lockstep with the narratives of its characters. Definitely recommended! I really hope British Library or Ipso reprints The Ghost It Was (1936) next. A detective novel that has been described as Hull's homage to John Dickson Carr.
Geplaatst door TomCat on 5/25/2018