I know my blog is dominated by locked room mysteries and impossible crimes, which tends to come at the expense of regular detective stories, but the monster that Edgar Allan Poe created still has me firmly in its grip. Just like Vincent, "I'm possessed by this house and can never leave it again." Nevertheless, I do want to spread out my locked room reading in the future, but until then, I crossed two more short stories from my to-read list. Stories by two modern-day champions of the impossible crime story whose dedication and output rivaled that of the master, John Dickson Carr. 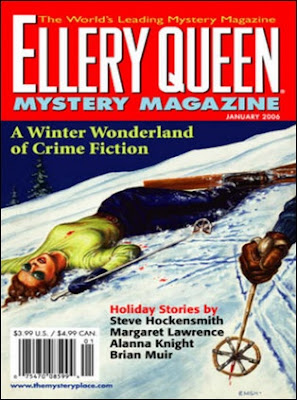 Edward D. Hoch's "The Problem of the Devil's Orchard" was originally published in the January, 2006 issue of Ellery Queen's Mystery Magazine and will be collected for the very first time in the forthcoming Challenge the Impossible: The Last Casebook of Dr. Sam Hawthorne (20??) – published by Douglas Greene of Crippen & Landru. A collection of short stories representing the closing chapters on a long-running series that was fully dedicated to the impossible crime story, but we can be downcast about this when the time comes.

"The Problem of the Devil's Orchard" takes place during Labor Day weekend of 1943, when the tide of the war in Europe was turning in favor of the Allies, but the war was not the only thing occupying the people of the New England town of Northmont. A young man had miraculously vanished from an apple orchard.

Phil Fitzhugh only recently celebrated his nineteenth birthday, works at the feed store of his family and is dating a girl, Lisa Smith, whom he intends to marry, but her folks won't hear of it. Phil became frantic when he finally received his draft notice.

So Lisa turned to Dr. Sam Hawthorne for help, who enlisted the assistance of Sheriff Lens, but after they pick a drunk Phil up at a bar, where he was "acting a bit unsteady," he escapes from Hawthorne's car and flees into Desmond's Orchard – known locally as the Devil's Orchard. The hundred-acre apple orchard is believed to be haunted and attracts "arcenous children," which is why the owner erected two, eight-feet chain-link fences topped by barbwire. Phil was completely trapped inside the orchard, but a subsequent search by fifty workers only turned up a blood-smeared shirt. And the strip of bare soil along the fences was soft enough to show footprints. Only problem is that the earth showed no signs of having been stood on. So how did he vanish from a locked and watched apple orchard?

Hoch has a deserved reputation of usually delivering one of the better, if not the best, short story in any mystery anthology that he's a part of, but this is not one of his finest pieces of impossible crime fiction.

The clues and hints to the solution where all there, like the stone that was found on the bloody shirt, but the fair play could disguise that the impossibility was weak and uninspired. An explanation that should have been used as a false, throw-away solution. Unworthy of Hoch, the King of the Short Detective Story.

So, now we go from one modern locksmith of the impossible crime story, who's no longer among us, to another artisan who still very much alive.

An English translation of Paul Halter's "The Robber's Grave" first appeared in the June, 2007 issue of Ellery Queen's Mystery Magazine and was translated, as always, by John Pugmire of Locked Room International. The story is a charming one and can be compared to the kind of impossible crime stories from Carter Dickson's The Department of Queer Complaints (1940). 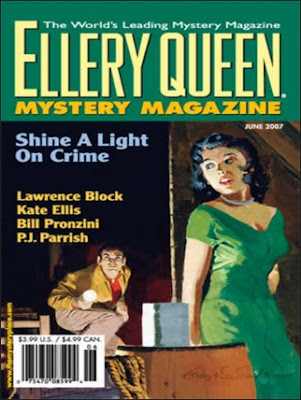 Dr. Alan Twist had taken his car to escape the noisy, bustling city of London and lose himself in "the peaceful English countryside," but had ended up in a "desolate spot" across "the border of darkest Wales." There he stumbles into an inn and listens to the story of a nearby grave site where grass refuses to grow.

A hundred years ago, Idris Jones was denounced by "a couple of blackguards," who claim to have seen him rob and beat a beggar to death, but, despite his heated denials, Jones was hanged as a murderer. On his way to the gallows, Jones asked God not to allow "a blade of grass ever to grow over his grave" and the grass over his grave did turn yellow and then disappeared. And that's the last time green was seen on that patch of ground. An attempt to find a logical and natural explanation has driven a developer out of the village.

A property developer from Bristol, Evans, had bought the land and wanted to turn the grounds into a golf course, but you don't want your patrons to come across a haunted grave when they're doing a relaxing round of golf. So he vowed "to break the ancient curse" or "abandon the project." Evans went to a lot of trouble to prove it was all a trick or misunderstanding.

Evans removed the earth to a considerable depth and replaced it with rich, seeded loam, but the grass had scarcely began to grow when it began to turn yellow, died and a bare patch outlining a grave – which only made him double his efforts. The earth was replaced again and Evans hired the best gardeners in the region, but when even this failed he began to suspect sabotage from the locals. So he built a wall around the fence with a metal grille serving as a gate. Guards and dogs watched over this small fortress and the earth inside was, once again, replaced. But all to no avail. The grass refused to grow.

A good and novel impossible situation with a neat, simple and believable explanation that also betrayed the author is undeniably French.

I believe these type of peculiar problems and unusual impossibilities work best, as is demonstrated here, when the problem-solver of the story acts purely as an armchair detective who listens to these extraordinary accounts and then reasoning a logical answer from that same armchair – doing all of the work in his head. "The Robber's Grave" is not strictly an armchair story, because Twists does leave his seat, but he pretty much functions as one. And he figures out the method when he recalled a mean-spirited prank he played on a nasty neighbor as a child.

So we have a good, fun little detective story and another that began promising, but ended up being underwhelming. Well, we'll have to do with that, I guess, and I'll return with some non-impossible crime novels from the likes of Christopher Bush, E.R. Punshon and perhaps Erle Stanley Gardner. So stay tuned.
Geplaatst door TomCat on 5/16/2018