The Hong Kong Kowloon Treasure Murder Case is a four-part episode that opened the first season of Kindaichi Shounen no Jikenbo R (The File of Young Kindaichi R) anime series and reviewed a bunch of episodes last year, which included a number of fine examples of the unbreakable alibi (The Prison Prep School Murder Case) and the locked room mystery (The Rosenkrauz Mansion Murders). After reading the surprisingly excellent The Headless Samurai, published in the original manga series, I wanted to return this series. 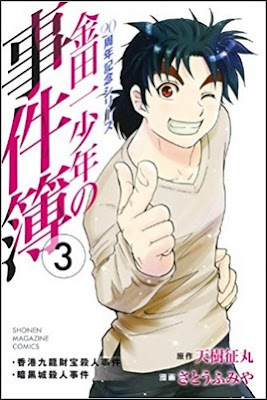 The Hong Kong Kowloon Treasure Murder Case consists of four, twenty-minute episodes and the plot combines (mild) thriller elements with the usual Kindaichi plot, which involves kidnapping and three murders by a dark figure known as the "Poison Dragon" – whose back-story is deeply rooted within the Walled City of Kowloon. A densely populated, lawless labyrinth where the Kowloon Palace housed a dragon statue with "diamond worth billions" (*) as eyes. The diamonds are known as the Dragon Eyes and people believed them to be cursed. So nobody even dared to touch them, until Wang Long, "the so-called Emperor of Kowloon," pried them from the statue. They eventually went missing and are rumored to be hidden somewhere in Hong Kong.

An addendum to this back-story is that Wang Long was betrayed and murdered, twenty years before this case, but vowed with his dying breath that "all will die" when "the Poison Dragon awakens." I appreciated how the legacy and history of that "dark complex of maze-like buildings" lurked in the background of the story.

Two decades later, Miyuki gets an unexpected opportunity to do modeling work in Hong Kong when she's spotted walking down the street with Kindaichi by Ryuta Takigawa of Tokyo Girly Mode.

So he goes along with her to the Jewel of Asia and there they bump into a friend, Saki, who's an enthusiastic videophile constantly recording everything that goes around and has often assisted Kindaichi on his cases, but their merry reunion is shortly lived when Miyuki vanishes from a watched, curtained fitting room in a clothes store – an impossibility Kindaichi immediately solved. An antiquated, overly convenient solution that begs the question how the kidnapper knew Miyuki would use that specific fitting room. Or do all of the fitting rooms there go with a sliding panel?

Anyway, they go through the sliding panel and, when they come out in a back alley, they see an unconscious Miyuki in the backseat of a black car, which Kindaichi attempts to follow on a bike, but is unable to keep up the chase. And soon thereafter, he receives a text message from Miyuki saying that they will kill her if he goes to the police.

So he has to find her on his own and a another, very convenient coincidence puts him on a possible trail when they bump into a model, Yan Ran, who looks exactly like their missing friend and was reportedly missing – which is how Miyuki got her modeling gig. Yan Ran is directly tied to the past of the Walled Town and has a dragon tattoo with a hidden message, when deciphered, gives the location of the Dragon Eyes. This provides the story with a side-puzzle, as Kindaichi has to break the code in a race against time, because this supposed treasure could destroy the whole of Hong Kong.

So there you have the thriller elements, although mostly of a relatively mild variations, but there are also the previously mentioned murders and two of those killings provide the story with a traditional detective problem.

The Hong Kong promoter of the Tokyo Girly Event, Chan Yongu, is poisoned under nearly impossible circumstances during dinner when eating poisoned soup that had been served to everyone else, including Kindaichi, without any ill-effects. However, the poisoning does not hinge on a trick allowing the murderer to unobserved spike the soup and think most viewers can (largely) work out the method. But the second murder has some real ingenuity and originality.


A man by the name of Shin Li, who gave his place at the dinner table to Chan Yongu, is beaten to death in an apartment room across the street, but all of the potential suspects where under lock down and police guard at the hotel – giving them cast-iron alibis. This alibi-trick had been used before in the series, in regards to a locked room murder, but here it's used to craft a perfect alibi and what makes it somewhat original is the tool the murderer used. I don't think it could have been done as fast as the episode suggested, but the idea is a novel one and added a new ripple to the age-old trick of hiding something in plain sight.

However, the most important murder is the third one, which does not provide a puzzle problem, but has a subtle, tell-tale clue that, if spotted, tells you who the "Poison Dragon" really is.

The identity of the murderer, even if you don't spot the tell-tale clue, probably won't come as too big a surprise to the seasoned mystery reader, but the motive was interesting as it gave a twist to the motivation that drives most murderers in this series. It was that motive, but not in the way you imagined. And that was a nice touch.

So The Hong Kong Kowloon Treasure Murder Case is an often fast-moving detective story with thriller elements, code cracking side puzzles, a MacGuffin, the Poison Dragon murders and unbreakable alibis, which made it an entertaining four-parter, but the overall plot and story does not measure up to the best from this series. There was too much of everything and this diluted the stronger aspects of the plot. Still, they were not bad episodes to watch. And, hey, when I'm not overly negative about Kindaichi it says something about those volumes or episodes.