"How do we go about it? Will we have to draw up lists of suspects and timetables and all that sort of things?"
"Certainly not! That's the part I always skip in detective stories. The really good ones don't even put it in."

A room that kills is a type of impossible crime that's usually tagged as a familiar trope of that particular sub-genre of the classic detective story, but they aren't as common as regular locked rooms that don't have a curse attached to them – and I can only think of a handful of examples myself. John Dickson Carr tried his hands at explaining a few of them, most notably in The Red Widow Murders (1940), and lateral thinker Jonathan Creek exposed the mechanics behind one in the television special, The Grinning Man (2009). Helen McCloy's Mr. Splitfoot (1968) also grabbled with this problem in an engaging way and turned out to be one of the most fun books I had the pleasure of reading this year! 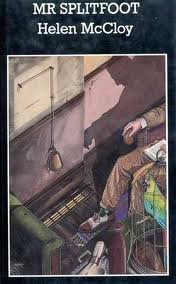 Reading this book is like listening to a best-hits album of your favorite band or musical genre, as McCloy furnished the plot with all the archetypical trappings of an oldfangled whodunit. There's a snow-bound mansion, which conveniently is the abode where Dr. Basil Willing, the reputable story book detective, and his wife find a temporary dwelling after their car gave up on them, harboring a haunted room that becomes the scene of an exquisitely executed, open-door locked room mystery and more!
The fateful events of the story are set in motion by two scheming, mischievous teenagers, Vanya and Lucinda, who are plotting a malicious prank at the expense of the neglectful adults – and their favored method is exploiting a local legend by faking poltergeist activity. Vanya has discovered a forgotten and hidden attic, possessing all the acoustic qualities any two-bit spiritualist would kill for, from which he'll produce rapping's while she has to pretend hearing a pattering in the tapping sound and establish a communication with it by calling out "Do as I do, Mr. Splitfoot" and clap three times.
Her roguish partner in mischief will respond with three unmistakable taps, but she gets quite a turn when, after having performed her part in their little prank, he gives her call informing her that he's still at home and unable to fulfill the role of playful ghost that night. But if he wasn't in the hidden attic making the ghostly noises then who did?
Meanwhile, the arrival of Dr. Basil Willing and his wife, whoms car broke down in the middle of a heavy snowfall, opened up a discussion centering on a disused guest room that has been tightly kept locked for two generations. According to the family legend, three people perished after spending the night there and as a precaution the room was locked and pretty much ignored until that evening – and all but one of the men are in the mood to challenge the room's grim grasp on its occupants. So they do what all sensible men would do in their situation: cut a fresh pack of cards, whoever draws the lowest cards must spend a night in the room, rig up a warning bell and put a parakeet in the room (in case of a poisonous gas) and leave the lucky fellow with a book and a can of hot coffee.
But the room has lost nothing of its killing edge after being abandoned for decades and before long they hear the tinkling of the bell from the accursed room! They storm in and find the lifeless remains of their experimental test subject sitting upright in a chair, but the dust covered floor shows no signs of anyone having walked over its surface after them and the field of unbroken snow surrounding the house precludes any outside interference.
I have to completely agree with John Norris, who posted an excellent review of this book mere moments after I placed an order for it, in ranking the impossible crime aspect of the story alongside the best of John Dickson Carr. It's no mean feat to create a genuine locked room problem in an open, unlocked room whose exit wasn't closely guarded and is situated in a house with hidden rooms. And what's more, the solution is simple, clever and satisfying!
That's what makes this book so fascinating and fun to read; it doesn't limit itself to being merely a nostalgic compilation of the best bits and pieces of a bygone era and does more than just igniting a warm sense of déjà-vu. It's a clever and well-plotted detective story in its own right and I simply loved how big chunks of the story were seen from the perspective of the wickedly delightful Vanya and Lucinda – especially when they decide that the investigation at hand requires their help and start fabricating evidence to nudge the police in the right direction. Brilliant!
I enthusiastically recommend this book to any one who shares my love for mysteries in the old-fashioned way or want a locked room mystery that's a little bit out of the ordinary.