Exams Can Be Murder

"There's the scarlet thread of murder running through the colourless skein of life, and our duty is to unravel it... and expose every inch of it."
- Sherlock Holmes (A Study in Scarlet)

From what I've read, Libbe van der Wal was a well regarded and remarkable individual within the academic circles of his time, who held the position of rector at a gymnasium in Delft and was appointed a professorship at the Delft University of Technology in 1952 – which he combined with his work for the Humanist Society until he retired in 1966. Fortunately, these exalted labors still allowed him the time needed to work on his books, of which two were works of fiction, Een kogel voor Oedipus (A Bullet for Oedipus, 1954) and Moord op het eindexamen (Murder During the Final Exams, 1957), published under the byline Tjalling Dix. 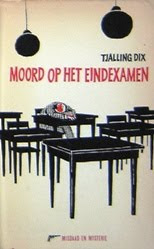 Van der Wal was one of the Dutch Dons of Crime, a noted academician who wasn't too stuffy to be distracted from his noble pursuit of enlightenment to dabble around with red herrings and alibis, and you'll understand why when you read an anecdote from one of his former students. He seems to have been a man who escaped from the pages of a Michael Innes novel! The story comes from a pupil of his school who one day slipped from his class, to take bathroom break, when, on his way back, he heard how another, disobedient class was on the receiving end of a verbal tirade from Van der Wal – who angrily stormed out of the room to decide their faiths. But to his very great surprise, he saw, when peeking around a corner, that the rector had burst into a violent fit of laughter. He wasn't angry at all, must have even thought they were amusing, but it was his task to discipline them – and after molding his face back into a mask of stern disapproval, failing several times, he marched back into the classroom to dish out their just desserts. What a fun docent he must have been!
Moord op het eindexamen (Murder During the Final Exams), his second and final detective story, is set at a small-town gymnasium during exam period – and the author draws from his own experience as rector of such a school to bring the book alive. The high strung-nerves of the graduating students, the hustle-and-bustle in the staff room and the visiting delegates make this a wonderful period piece depicting the educational system of the 1950s – and the vendetta between Termols, a math teachers who's at odds with everyone and everything in possession of a heartbeat, and the beloved and popular rector of the institute furnishes the plot with a classic set-up for a good, old-fashioned murder case.
Termols is a particular nasty piece of work, unscrupulous and scorned by virtually everyone in the environs of the school, who jeopardizes students educational careers, and thus their future, if he can score a grubby point with it in his feud with the rector and one has to wonder why nobody cut his lifeline short before – but the inevitable eventually happens when his body is discovered, locked-up in his own classroom, after falling to be present at an important staff meeting. Nope. Unfortunately, this is not a locked room mystery, even though it was teased as such for a brief moment, as the murderer could've snatched either the spare key of the room or made an exit through the open fire escape.
Enter Joris de Corthe: a police inspector who appears to be a literary relative of John Appleby and Roderick Alleyn and he does a competent enough job at figuring out who bludgeoned the unpopular math teacher to death, but the solution he comes up with is workmanlike rather than artistically inspired – hinging on faked blood spatters, a missing piece of paper, a hidden alibi and a trivial piece of information the murderer couldn't possibly possess if this persons hands weren't stained with blood. However, there are touches of ingenuity in the opening chapter, which contains a clever bit of misdirection, and I have to give props for skillfully handling the weakness surrounding the motive. We're not provided with any hints that point to a motive, making it very hard to confirm your deductions or suspicions, but De Corthe is faced with the same problem as the reader – since he grabs as much in the dark were motivition is concerned until after the final confrontation with the murderer, and that's, IMHO, entirely fair.
Overall, this book is neither a tour-de-force nor a disaster, but a proficient stab at having a little bit of fun from an otherwise occupied scholar – and that attitude definitely rubbed off on me. It should also be noted that he seems to have something in common with Hake Talbot and John Sladek: both men published two detective novels during their lifetime with one of them standing out as a enduring masterpiece, while the second one is considered to be an afterthought. Well, from what I understand, Moord op het eindexamen fulfills the position of the latter, while Een kogel voor Oedipus apparently was his magnum opus – one critic even proclaims it as one of the best Dutch detective stories ever written and an exempli gratia of fair play. Looks like I have to go hunting again!