Cobb's Night With a Frozen Fright

"I went to the bar and made a bourbon and soda for myself. Ralph had one too. He looked as exhausted as I felt. I had no idea how guys like Hercule Poirot and Doctor Fell managed it. Yes, I did. By not being real, that’s how they managed it."
- Matt Cobb

If you know me just a little bit, you're probably aware that I look at the post-GAD era as a dry wasteland, barren of any creativity, and it must have come as a mild shock to see my rigidly frozen, anti-modernist stance thawing over the past few months – as I discovered and enjoyed the stories from many different contemporary crime writers. I still think the oasis patches of green and blue are few and far between, but it's gratifying to know they're still out there and escaped being buried under an ever increasing pile of bloated, third-rate mush that the lion's share of publishers like to barf out on their reading audience.
William DeAndrea probably is the one who's responsible for swaying me into reconsidering my standpoint on modern detective stories. This transition from fundamentalist to moderate happened last year, when I read Killed in Paradise (1988), The HOG Murders (1979) and The Werewolf Murders (1992). I had bought them, more or less, on a whim, but was amazed to learn that they possessed all the qualities of the past masters of the genre – it was like being confronted with a living fossil from the Cretaceous Period! 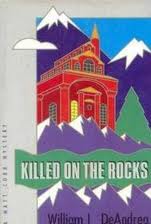 Killed on the Rocks (1990) is another fine example of William DeAndrea adjusting the traditional detective story to a modern surrounding without sacrificing any of it's authenticity – as Matt Cobb solves an seemingly impossible murder at a snowbound mansion.
Matt Cobb is the quintessential American detective, whose narrative voice echoes the tone of the hardboiled gumshoe, especially Archie Goodwin's spirit reverberates through his lines, but what sets him apart from Archie Goodwin, Sam Spade and Philip Marlowe is that he's not a licensed private investigator. Cobb is the Vice President of a TV-station simply known as The Network and he's in charge of Special Projects, which basically means that he's a specialized troubleshooter – and one that's much needed when dealing with the rich and famous.


His current assignment focuses on overseeing and protecting the negotiations between The Network and the billionaire Gabby Drost, a corporate raider and economic pirate, who wants to buy the television station and the wheeling and dealing is to take place at his mountain mansion – and Matt Cobb is send along after a series of anonymous letters that put question marks to Drost's sanity and that a deal with him will mean certain ruin for The Network.
A slightly eccentric, soon to be departed, billionaire? Check!
An isolated mansion? Check!
Populated with an ill-assorted cast of characters? Check!
A paralyzing snowstorm? Check!
A sort of unofficial detective who just happens to be around whenever bodies start hitting the floor? Check!
The game's afoot? You bet!
On the morning after their first night at the luxurious mountain retreat, they awaken at the sight of their host's body laying outside of the house – squashed on the rocks and there's field of unbroken snow between the unsightly remains and the front door! There's not even a single track of footprints leading up to the macabre composition in red and white!
I've read many different solutions to these kinds of miracle problems, but this one takes the cake for sheer complexity – sporting one of the most contrived answers on how to trod through a blanket of virgin snow without leaving any footprints. Don't get me wrong, I mean this in the best way possible. It's true that impossible crimes are often best explained with a simple, yet brilliant, solution, but sometimes overly elaborate ones can be just as satisfying. However, I have to stroke my own ego here for a moment by saying that my solution would've been a lot easier to execute and still being just as clever as this one.
But the entire plot doesn't just orbit around that single question of how the murderer pulled off this illusion, but is also loaded with enough pressing questions to keep Cobb and the reader occupied until the final chapter – and shows how the traditional detective story benefits from an upgrade when it's done by someone who knows what he's doing. There are a number of queries raised in the story that you won't find in a classic whodunit from the 1930/40s. For example, why did the wife of Drost make a pass at one of the female representatives of The Network, denying it fervently the following day, and how did a TV set transmit image and sound of the dead man, pointing an accusing finger from beyond the grave, when it wasn't hooked up to anything and was only fed power from the electric socket?

DeAndrea proved here that he was a first-rate all-rounder as he skillfully sets-up a story that's both meticulously constructed as well as having it moments of thrilling suspense – and has an eye for developing his regular character in more well-rounded characters, but he never, for even single moment, forgot that he was writing a detective story and not a soap opera. In effect, he was one of the few who showed that tradition and innovation aren't mutually exclusive in this genre. What a terrible loss for us that he died so young! If only we could trade him back for writers such as Dan Brown, Gilbert Adair or any other second-rate reject who couldn't make it as a "serious" writer and decided to fluff up their shallow musings on live with a few crimes and euphorically present it as a literary thriller.