"Have no fear, Sire, I will remedy the oversight at once. The name of the murderer is—" I paused dramatically and looked stealthily over my shoulder.
"What the hell are you doing?"
"Isn't this the point in the movie when a shot rings out from the surrounding darkness and I slump over dead before I can reveal the name of the evil killer?"
- Norma & Alexander Gold (The Gold Solution, 1983)

I have with a certain degree of regularity mourned the demise of the vision I had for this place, when I embarked upon this journey in the blogosphere, which was that of a digital mausoleum erected in the memory of the grandmasters and disregarded works of criminal fiction from a bygone era, but that went out of the window as a different pattern started to emerge in my reading habits and completely encompassed me – as the presence of contemporary practitioners, such as William DeAndrea and Bill Pronzini, shooed away the ghosts of John Dickson Carr and Kelley Roos. Today, I realized that my fellow Connoisseurs in Crime have been all but supportive in helping me breaking that habit and instead have been dangling novelists like Louise Penny and L.C. Tyler in front of me – which is the disastrous equivalent of pouring alcoholic beverages at an AA meeting.
But I can't blame them entirely for my precarious situation, in which I unmercifully have to pick and choose between detective stories from two different epoch's, since I picked up Herbert Resnicow without being probed by my habitual tormenters – and it's been a delight to discover another GAD throwback on my own accord. 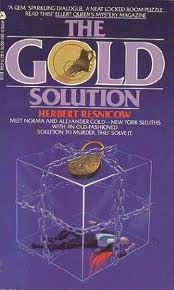 The Gold Solution (1983) was Herbert Resnicow's first detective novel, in which he introduced the world to Alexander and Norma Gold, two behemoths of physical specimens endowed with an above average level of intelligence, and a penchant for the same kind of affectionate banter that makes the Jeff and Haila Troy mysteries such a joy to read. As a matter of fact, this book is not entirely dissimilar to a Nero Wolfe and Archie Goodwin story as perceived by Kelley Roos with a locked room problem thrown into the mix. The relationship between the genius Alexander and the snarky Norma here is especially akin to Wolfe and Goodwin. Alexander survived a brush with the specter of death and recovery binds him to an armchair, which leaves Norma with all the legwork and towing suspects to her husbands study – all the while keeping his ego in a manageable size with a few cutting remarks.
Alexander Gold is on the rebound from a nearly fatal stroke, but the road of recovery is a long and tedious one – and his considerable intellect is withering away with inactivity until one of his friends, a high profile criminal lawyers, offers him an enigmatic puzzle to solve. One of his clients, a young man named Jonathan Candell, is accused of killing his employer, Roger Talbott, one of America's foremost architects – and his fiancée and friends are convinced of his innocence. The problem is that he was found hunched over the body, with a bloodstained knife in his hand, inside a locked studio atop a brownstone that resembles a heavily guarded fortress – making it impossible for a second person to have slipped in and out of the room unnoticed to plunge a knife in Talbott's back. The hefty couple sets to work to examine the sealed environment of the studio for cracks and find out who of the partners in the firm squeezed through it to deliver the fatal knife thrust.
The impossible situation is not entirely unlike the one in Carter Dickson's The Judas Window (1938), but the solution here misses the spark of ingenuity of the titular window in Carr's novel and failed to excite me once the mechanics were explained. It's a workable solution, certainly, but it's also workmanlike rather than inspired – and basically an elaborate reworking of a time-honored trick. But I think the merits of this locked room illusion will be different for each individual reader and I don't want to take anything away from this highly diverting read, which was also his first foray in the genre and I make it a policy not to be too critical of first attempts at crafting a detective story. Imperfections are bound to show up.
But Herbert Resnicow should be commended for retaining a light-hearted and spirited tone of story telling throughout the entire book, even when it becomes known that the victim had a taste for teenage girls, who bore a superficial resemblance to his dead mother, which would've been a turn for the worse in most of the crime novels of today, but here the focus remains on the intellectual problem – which is also something that was noted in his obituary (yes, he's gone, too!). He preferred to treat his readers on brainteasers, intellectual puzzles and just having some fun all-around.
Is this a perfectly constructed and executed detective story? I'm afraid not, but it's good and fun enough to keep the pages turning – and it's not a book that should be missing from your shelves if you're a fan of mystery solving husband-and-wife teams. Alexander and Norma Gold continued where Jeff and Haila Troy, Jane and Dagobert Brown and Pam and Jerry North left off and literarily demonstrated that there's always a place on the printed page for larger-than-life detectives – even in this day and age.
Geplaatst door TomCat on 6/29/2011