There's No Such Thing as Magic

"The impossible situation, by its very uniqueness, ultimately limits the possibilities."
- The Great Merlini (Clayton Rawson's Death from a Top Hat, 1938)

Clayton Rawson was an illusionist, editor and mystery writer, who's mostly remembered for his detective stories about The Great Merlini, but he also authored a second, short-lived series about another magician detective, Don Diavolo – originally published, as by "Stuart Towne," in Red Star Mystery during the early 1940s. All of the stories were collected in two volumes, Death Out of Thin Air (1941) and Death from Nowhere (1943), which comprises of four novellas. 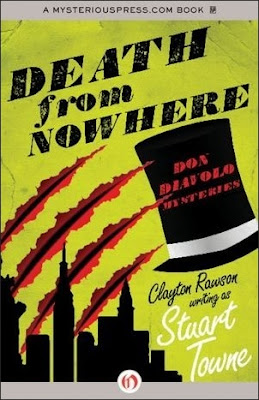 A fifth novella, entitled "Murder from the Grave," was scheduled for the February, 1941 issue of Red Star Mystery, but was never published. Considering the title of the story, I strongly suspect Rawson refurbished it as a Merlini novel and released it a year later as No Coffin for the Corpse (1942). And that brings us to the subject of today's review.

Last month, "JJ," who blogs at The Invisible Event, reviewed No Coffin for the Corpse and the Don Diavolo novellas were brought up in the tail of comments.

I opined that the Great Merlini series was written as proper, straightforward detective stories, while the Don Diavolo ones were pure pulp, however, my observation about the latter was based on just one story, "Death Out of Thin Air" - which I read in the elephantine The Black Lizard Big Book of Locked Room Mysteries (2014) and reviewed here. So I wanted to see how correct, or incorrect, my assumption was and picked one of the two volumes from the big pile.

Death from Nowhere opens with a novella that's part detective story and part pulp thriller, but both sections of the plot establishes Don Diavolo, the Scarlet Wizard, as a master escapist.

The first story, "Claws of Satan," was first published in the June, 1940 issue of Red Star Mystery and begin with Don Diavolo, bound and manacled, inside a submerged "double cocoon of glass and metal." It's an escape trick that tied him to his basement workshop for the past week, but an unpleasant business affair forces him to venture outside. A disreputable circus owner, R.J. Hagenbaugh, bought a new guillotine trick from Diavolo's outfit, but stopped payment on the check he wrote him. Now the fear is that he'll take apart the illusion and put up for sale in the catalog of his Outdoor Amusement Supply House. And the Scarlet Wizard won't see a dime of it!

So, of course, Diavolo did not leave his workshop to have a respectful disagreement with Hagenbough, "mentally trying to compose a few sentences whose edges would be sharp enough to penetrate" Hagenbaugh's thick hide, but the magician would be engaged in trouble once he mendaciously gained access to his private office – getting knocked from behind by an unknown occupant of the room. Once he regained consciousness, Hagenbaugh is slumped behind his desk, dead as a door nail, with "five long parallel scratches" along the right side of his face and neck. A chair was tipped back against the door, top jammed beneath the doorknob, while his arch nemesis, Inspector Church, was banging against it! Diavolo had some explaining to do. 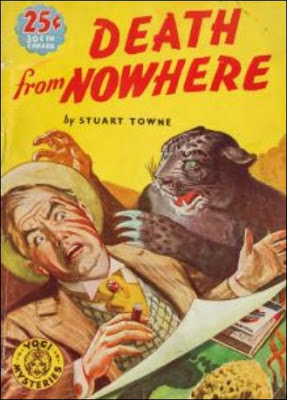 Interestingly, the first half of this novella reads like a proper detective story in the Van Dine-Queen mold: the crime-scene is thoroughly investigated, which yields such clues as a missing shoelace, a damp sponge and water on the floor, but also the discovery of another crime and several revelations. Additionally, there are some false solutions. However, the best part is perhaps how this section of the story ended. Diavolo is arrested, handcuffed to both Inspector Church and Lieutenant Brophy, but he still manages to vanish... from a locked and watched elevator!

The second half of the story is more carny pulp and has a deadly tight rope act as well as Diavolo tangling with some circus folk. Of course, this will land him in another spot of danger that requires him to pull off another escape act. Seriously, this series show what Maurice Leblanc's Arsène Lupin series would've been like had the character been a detective instead of a gentleman thief.

Luckily, the solution is satisfying enough and properly clued. I loved the clue of the cryptic message, "SNOW LEOPARD," and how that tied in to the motive, but locked room angle is also properly handled with sober explanation. The trick of the barricaded door is fairly routine, but not all that bad. It's very believable. Not as good is how the murderer remained unseen from the secretary outside of the office. It's not something everyone will swallow and basically ripped off from a famous, but disputed, short story that some even seem to hate. As a whole, the story is not bad and really like it. Especially the first half.

The second novella, "The Enchanted Dagger," came from the December, 1940 issue of Red Star Mystery and is, for better and for worse, sensationalist pulp from start to finish – topped with some Fu Manchu-style shenanigans.

Diavolo is challenged by a crusty, old champion of the paranormal, Mr. Nicholas Sayre, who has "a deep-seated distaste for magicians." Sayre is a multi-millionaire fascinated by "the subject of Tibetan and Indian sorcery" and is a fierce proponent of the supernormal, but Diavolo once proved that the president of psychic research society was a fraud. And that why he particularly disapproves of the Scarlet Wizard. 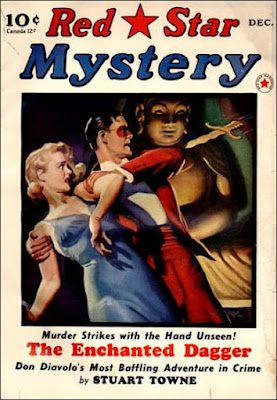 However, Sayre has come across a man who can do everything: a mystic by the name of Shivara. He can vanish front of your very eyes, summon an astral projection of himself and read minds. So, the millionaire wants to pit the powers of the mystic against the skeptical-minded Diavolo, which results in a stunning array of seemingly impossible situations – such as a poker moving by its own, a disappearance from a library and a murder by the titular dagger. A dagger that was thrust between someone's shoulder-blades!

This plot-thread closely linked to the disappearance of a body from a hotel room, an archaeologist who supposedly died in Persia (present-day Iran) and the long-lost treasure of Alexander the Great. I found this to be one of the more appealing plot-threads of the novella, because the impossible crimes and supernatural feats had a profoundly disappointing explanation. You can even say it was a bit of a cheat.

The answer as to how a poker and dagger could be moved by invisible hands, the disappearance from locked and watched library and the astral projection all had the same, disappointing answer. One that rolled two of the most underwhelming and unfair explanations into one. Diavolo even used it to do the Indian Rope trick. I know, it sounds intriguing, but believe me, it's not. We give the Master of the Locked Room himself, the Great John Dickson Carr, flack for his dagger trick and cheating in Seeing is Believing (1941), but that's actually ingenious compared to this.

So, all in all, I would say that my observation about the differences between Rawson's Merlini and Diavolo stories was pretty spot on. The former are written as proper detective stories and the latter are firmly grounded in pulp territory, which the second half of the first story and the entire second story clearly shows. However, they make for a good read and the sheer imagination of all those impossible situations, false solutions and dangerous escapes make them very energetic tales. Even if their ending doesn't always live up their wonderful premise.