"It sounds to me like one of those yarns you fishing fellows tell..."
- Assistant Commissioner (Harriet Rutland's Bleeding Hooks, 1940)

The Mystery of Swordfish Reef (1939) is Arthur W. Upfield's seventh novel about his half-caste policeman, Detective-Inspector Napoleon "Bony" Bonaparte, who's plucked out of "his natural background," the Australian bush, and dropped on the coast of New South Wales – tasked with prying one of the many, tightly-held secrets from the ocean. One that concerns the fate of a fishing launch that vanished from the surface of the sea. 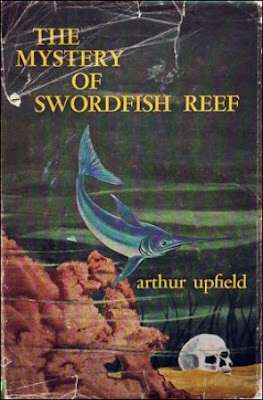 The exact locality of the story is a coastal town, called Bermagui, which grew from a small, isolated hamlet into "a centre of big game fishing" when the swordfish was discovered in its surrounding waters. So the place quickly became "a fisherman's paradise" and deep sea anglers usually flog the place during swordfish season, but this time the place is flooded with cancellations after an angler, a Mr. Ericson, did not return from a fishing trip.

Ericson was accompanied by two launchmen, Bill Spinks and Bob Garroway, when they were "trolling for sharks northward along Swordfish Reef," but their launch never returned back to port and an extensive search-and-rescue effort failed to turn up as much as a piece of wreckage.

Several weeks passed without any news until a trawler made a gruesome discovery in one of its dragnets: a severed, crayfish-eaten head with a bullet-hole in it!

As it turns out, the human head is that of the missing Mr. Ericson, who retired several years previously as a superintendent from Scotland Yard, where he was "one of the famous Big Five," which is why one of his friends, NSW Chief Commissioner of Police, arranged the temporary transfer of Bony to the New South Wales C.I.B. – whose expenses for this special assignment are to be paid from Ericson's estate. Something that can only be described as an extraordinary state of affairs, but then again, Bony's involvement in an investigation rare makes for a proper police procedural.

Usually, the involvement of Bony is a cast-iron guarantee that you're embarking on an original, well-imagined tale of crime and detection, but I'm still not entirely sure what to think about The Mystery of Swordfish Reef. It's almost as if Upfield used his detective series as a vehicle to write the kind of sport story that was so popular during the 1930s.

Bony is granted unlimited time and a good amount of money to properly investigate the murder of Ericson and the disappearance of his launchmen, which he liberally uses to "impinge himself upon this unfamiliar background" of his watery surrounding. As he philosophizes, in his bush cases he had many allies, "the birds and the insects," alongside the soil that can be read like "the pages of a huge book wherein were printed the acts of all living things" and the actions of rain, sunlight and wind – which cannot be said about the heaving water which retained "nothing on its surface for long." However, the way he went about familiarizing himself with his new territory is by hooking a couple of big ones.

During the first half of the book, Bony takes a small launch with crew out to sea and let the reel on his rod scream, as yards of lines were torn off it, in a long, tiring struggle with two marlins. One of them is average sized, but the second one, a black marlin, proved to be a beast of a monster and got them in a spot of trouble when their prize was towed astern and attracted the unwanted attention of a shark – requiring them to take a shot or two at the slippery beast. 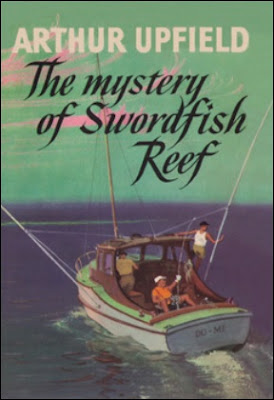 Admittedly, these long, intense struggles with the marlin were actually pretty good and well written scenes, but would, perhaps, have been more at home on the pages of Sport Story Magazine. Sure, they would compliment any detective novel with deep sea angling as a backdrop, however, the overall plot was far too slender for that being the case here. The premise had a ton of potential, but Upfield had evidently more interest in exploring the region and showing the exciting thrills of big game fishing rather than crafting a clever, or simply a passable, plot.

Upfield quickened the pace of the story towards the end, which saw Bony being kidnapped by the villains and losing his cool civility, but the last leg of the tale was more of a thriller-type of story than a proper detective. However, I liked some of the imagery in this part of the book: a wilder version of Bony sneaking up on his captor and the rolling boulder. Or how Bony's cover was blown by a newspaper headline screaming, "Brisbane Detective-Inspector Captures Giant Swordfish." So that gave the narrative in the second half some much needed urgency.

Well, as you probably noticed, my mind is devided about The Mystery of Swordfish Reef. On the one hand, I have to drag myself through this review, because there's barely anything to say or remark about the thread-bare plot. Upfield pretty much used the book to write about swordfish angling and this came at the expense of the detection and plot. So you're actually reading a piece of sports-fiction masquerading as a detective story. On the other hand, Upfield was a splendid writer whose forte was pulling the reader into a setting that he could bring alive like no other and this is no exception.

I prefer when there's also a solid plot to go with the evocative backdrop (e.g. Cake in the Hat Box, 1954) or actually focused on the story at hand (e.g. Man of Two Tribes, 1956), but The Mystery of Swordfish Reef is not bereft of Upfield's attractive and vivid writing style – which still makes it a pleasant and mostly leisurely read. Just don't expect the rug to be pulled from underneath your feet. The Mystery of Swordfish Reef is mostly a sports story with some crime-and thriller-ish elements, but I'm beginning to repeat myself here. And you probably got a rough idea what my opinion about this book is.

So let me end this blog-post by pointing to my previous two reviews, which discussed Philip MacDonald's The Maze (1932) and Willoughby Sharp's Murder of the Honest Broker (1934). Plot-wise, they were far, far more satisfying than the subject of this blog-post.
Geplaatst door TomCat on 3/31/2017