"You've solved murders by your shrewd observation of tricks. You're keen to catch an error."
- The Great Xanthe (Jospeh Commings' "Death by Black Magic," from Banner Deadlines: The Impossible Files of Senator Brooks U. Banner, 2004)

Recently, I reviewed One Remained Seated (1946) and Death in Silhouette (1950), which are part of the Maria Black series by John Russell Fearn, but the series consist of only five titles and knocking those two of my list left me with, reputedly, the least appealing book of the fivesome – namely Maria Marches On (1945) that has been republished as The Murdered Schoolgirl. Luckily, John Norris of Pretty Sinister Books, who wrote "Neglected Detectives: Maria Black, MA," recommended me to move on to the Dr. Hiram Carruthers series.

Dr. Hiram Carruthers is a well-known physicist and "ex back-room expert of the war department," who strongly resembles the popular bust of Beethoven, but also garnered a reputation as a "scientific specialist to Scotland Yard." And his specialism as a consulting scientist-detective are crimes that appear to be (scientifically) impossible. So you can call Dr. Carruthers a cross between John Rhode's Dr. Lancelot Priestley and Arthur Porges' Cyriack Skinner Grey. 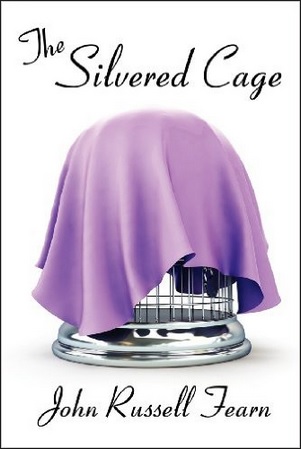 The Silvered Cage (1955) appears to have been the last book in the series, originally published as by "Hugo Blayn," one of Fearn's numerous pennames, which is really more of a novella than a full-fledged novel – counting roughly a hundred pages of fairly large-print. However, the plot of the story sports two impossible situations: an onstage disappearance during a magic show and an inexplicable death inside a locked room.

Robert Adey said in Locked Room Murders (1991) that The Silvered Cage was "not a bad little book" with a couple of impossibilities of "a highly technical nature" that still sound as if they might work. Even if they stretch credulity just a little bit. I think the book, as a locked room mystery, has some points of interest, but, as a detective story, it's not a very impressive piece of work. Somewhat flawed even. But more on that later.

Dr. Carruthers only appears very late in the story and basically fulfills the role of deus ex machina by descending from the heavens above to solve the problems that plague us mere mortals. The mortals are represented here by Detective-Sergeant Whittaker and Chief-Inspector Garth of the Yard. And their problems are brought to them by the daughter of a very wealthy business tycoon.

The young lady with a pretty face, innocent blue eyes and a gold tooth is Vera de Maine-Kestrel and she wants police protection, because she fears for her life. On the details she remains sketchy, alluding to her fiancé, certain monetary deals and "an incident in the past," but she knows when the attack upon her will be made, which will be at her home on the following day during "a big magical display" that's part of a dinner party – where she'll be playing the part of "vanishing lady."
Admittedly, the performance of this amazing vanishing act is easily the best part of the plot. A truly grand performance! What's even more amazing is the secret behind the illusion. One that might be hard to swallow, but it is a true original.

The illusion revolves around "a giant edition of normal birdcage," around six feet high, suspended two feet above the floor by a strong, brightly glittering chain and the silver-looking bars are about six inches apart. Everyone in the audience could see through it, under it and around it. No mirrors. No trapdoors. No switcheroo in the gloom of a half-darkened room. The Great Crafto works in bright lights, covered the cage with a cloth, and upon its removal Vera had appeared inside the cage, but the cover is not used for the disappearance part of the trick.

Vera spoke a few words to the audience and then proceeded to gradually fade away into nothingness! She "smeared mysteriously" and "vanished in dim vapours," but when the moment came to reappear the cage remained empty. So, of course, this causes some commotion, because she couldn't really have vanished, but the magician refuses to divulge the secret of his illusion to the police. And this is were the first flaw of the plot becomes apparent.

When she requested police protection, Vera told Whittaker that Crafto had to tell her how the trick worked, in order to make it effective, but she blabbed about it and told several people – including her own fiancé, Sidney Laycock. He's even a potential suspect, but it never occurred to the police to ask him how the trick was pulled off. Or track down any of Vera's friend who might have been told about the trick. Not even when the magician dies under suspicious circumstances.

That brings us to the second impossibility of the book: Douglas Ward, a.k.a. The Great Crafto, lived at a boarding house that caters to stage performers and his landlady was awakened one early morning by a "devil of a row" coming from his room. He was shouting for help and sounded as if he was tumbling around on the floor. However, the room was entirely locked from the inside and they had to break down the door. What they found was a dead magician and a peculiar smell lingered in the room. It appeared as he had been gassed, but what kind of gas and how it could have been introduced into the room is a complete mystery. 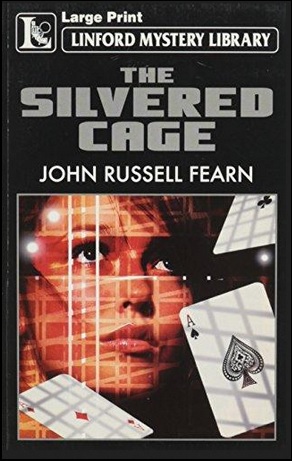 The locked room murder of Crafto is less technically complicated and easier to understand than the vanishing trick, but part of the method cozied up the science-fiction genre. However, the idea behind the trick is definitely possible and Fearn played around with a more elegant and workable idea in Black Maria, M.A. (1944). One of his characters used this trick in a stage-play to polish off a crystal gazer and version sounded a lot more plausible.

I should also point out that there are two Jonathan Creek episodes with impossibilities that are very similar in nature to the locked room situations from The Silvered Cage. There's a special that basically uses the same method employed here to kill the magician, but what's more interesting is that there's an episode that helped me get an idea how the vanishing of Vera was accomplished. The disappearance trick from the Creek episode was quite different, but that episode and this book basically used the same tools to create the effect that someone, or something, had vanished into thin air. I thought it was very interesting how both locked room situations were very similar to two different Creek episodes.

Well, that's about all that can be said about the impossible crimes from The Silvered Cage. So what about the plot as whole? It's not exactly a classic of its kind and the scheme behind the crimes felt a bit uninspired, which also tended to be sloppy where the details were concerned. For example, there's an unsolved murder case hovering in the background and it is mentioned that the victim was shot, but later it was said the victim had struck his head on the firestand – making it all of a sudden an accidental death!

I think this goes to show how much of a difference in quality there's between Fearn's Miss Maria Black series and his other detective stories. Fearn really appears to have put a great deal of time, effort and love in writing the former, while the latter were obviously written with less care and attention. Something I also noticed in The Crimson Rambler (1948), which was not bad and also showed some ingenuity, but does not come anywhere near any of the Maria Black novels. Fearn really wanted to write proper detective novels when using her as the protagonist. I wonder if there was a reason why he cared so much about that series.

Anyhow, The Silvered Cage has some points of interest as a locked room novel, but, as a detective story, comes up short and remains undistinguished. So I can only really recommend it to readers who are either interested in locked room stories or simply fans of Fearn's writing.

Well, I rambled on long enough. So let me close this blog-post by pointing your attention to my previous review of Capwell Wyckoff's The Mercer Boys in the Ghost Patrol (1929) and I'll probably be back with something really old.
Geplaatst door TomCat on 3/09/2017