"It's the people close to your heart that can give you the most piercing wound."
- Kenshin Himura (Rurouni Kenshin: Meiji Swordman Romantic Story, 1994-99)

The 59th volume of Gosho Aoyama's long-running series, Case Closed a.k.a. Detective Conan, opens with a chapter that the closes the book on the thrill-filled, novel-length story from the previous installment, which was rife with character development and revelations – as well as being one big confrontation between our heroes and the men in black. So that was quite a fun and eventful volume for long-time readers.

You can say the opening chapter of this volume is, somewhat, of an aftershock, but we all know that, what was depicted, didn't really happen. No doubt an explanation will be given in one of the (much) later volumes. All I'll say for those unfamiliar with the series (shame!) is that one of the characters appeared to have pulled a Reichenbach. Except that here the all engulfing waters of the fall were replaced by an all consuming fire of a fiery car wreck. 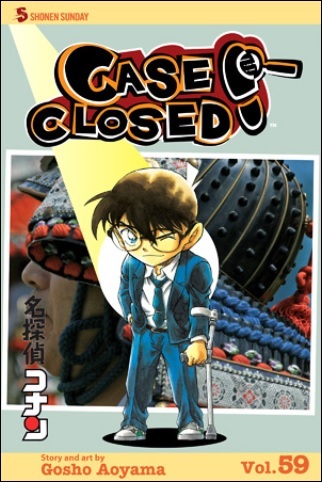 What follows are two stories, one short and one that's longer, but they're both excellent detective stories and this volume ends with the first chapter from a case that will be concluded in the next one.

So the first of these two stories is an inverted mystery, a la Columbo, but one that leaves the reader in the dark on how the murderer's alibi was created, which makes it a borderline impossible crime.

The murderer is a hairdresser, Minayo Hasaka, who has decided to murder her former high-school sweetheart, Shiro Nasaka, but he's a 200-hundred pound martial artist and she's a small, slender woman – which makes her an unlikely suspect when his body is found beneath a guardrail. His throat had been cut. Hasaka further cemented her claim to innocence by a having a famous lawyer as her alibi, but the lawyer in question, Eva Kaden, happens to be Richard Moore's wife. Of course, Moore, Rachel and Conan happen to be ones who discovered the body. Regardless, the alibi is rock solid and takes some thinking to break down.

Hasaka was physically unable to lug the body around and during a window of ten minutes, when she absent from the salon, she was at a corner-store. This was confirmed by the shop-owner, the receipt and footage from the security camera. So how did she managed to do it? Well, the solution managed to be simultaneously complex and very easy. I managed to get a general idea behind the trick based on the sounds Conan heard, "crash," "thud" and "klak, klak," in combination with the old scooter, a certain object behind the salon and the map of the neighborhood.

Granted, the method is both convoluted and very, very risky, but I appreciate Aoyama's ingenuity that showed how to create a watertight alibi and get rid of the body at the same time – even if the answer only really works in Conan's universe.

The second story is double the size of the first, covering six chapters, which has a plot that reminded me of a bit of Seichi Yokomizo's Inugamike no ichizoku (The Inugami Clan, 1951) and Yasuo Uchida's Togakushi densetsu satsujin jiken (The Togakushi Legend Murders, 1994?). One of the highlights of this delightful tale is that the plot is modeled around a Fuurinkazan motive, which is basically the Japanese equivalent of the nursery rhyme murders from Western detective stories (e.g. S.S. van Dine's The Bishop Murder Case, 1928).

A long-standing family feud between the Torada and Tatsuo clan is at the heart of the plot, which begins when the former engages the services of Richard Moore to investigate the curious circumstances surrounding the death of the patriarch's son, Yoshiro – who was "yanked into the sky" by a tornado and "dropped onto rocky ground." However, evidence suggests Yoshiro survived his landing, even if he was dying, but the initial person who found him left the wounded man to die. This personal also left a macabre calling-card: a dead centipede! But they're not the only ones who've asked the assistance of an independent detective with an outstanding reputation.

At the home of the Tatsuo family, we find a fresh-faced, but familiar, high-school detective, Harley Hartwell!

The head of the family, Tamefumi, has heard from Inspector Otaki about Hartwell's track record as "an amazing sleuth," which he sorely needs now that his son, Koji, has been murdered. Koji was found buried up to his neck in the earth, bludgeoned to death, but his killer had also left a dead centipede at the crime scene. Several additional bodies and dead centipedes would follow. A gush of murders that have apparent connections with an accidental death in the several years in the past, a village festival, yabusame (horseback archery), a treasure hunter and the wisdom of Sun Tsu.

I also have to point out here that one of the bodies is found hanging in the woods, but there were no footprints or marks in the soft ground surrounding the tree. However, this impossibility is an insignificant aspect of the overall plot. I only bring it up because the premise and explanation were reminiscent of the apparent miraculous hangings from Paul Doherty's The Song of a Dark Angel (1994), which is why I actually managed to figure out how it was done and guided my eye towards an interesting character – namely the murderer. Once they said the murder was an impossible one, I thumbed back several pages for a good overview of the crime scene, and suspects, and went, "aha!"

As good as the story is as a detective story, it's also important for introduction a brand new character, Kansuke Yamato of the Nagano Prefectural Police, who's a one-eyed police detective. And his back-story is tied directly to the background of this story. So that makes it quite the standout story in the series!

Finally, there's the first chapter of a new story that will be resolved in the next volume, but I can say that, reputedly, it will be the final appearance of Eisuke Hondo. But more about that in my review of volume 60. I'll try to get off the big pile faster than normal, because with this review out of the way I'm still two or three volumes behind on the releases. I suck when it comes to normally following series.

Well, the next blog-post is going to be a review of one of my favorite mystery writers not named John Dickson Carr. Not sure when exactly I'll be able to post it, but it won't be all that long. So don't touch that dial!
Geplaatst door TomCat on 3/05/2017