The Ghost of Rustling Ridge

Capwell Wyckoff was an American lay minister in the Presbyterian Church and an author of children's fiction, known primarily for a series of juvenile mysteries about the Mercer Boys, but he also wrote short stories for Boys' Life and Open Road for Boys – using the royalties to bankroll his missionary work. One source even claims Wyckoff "sold his Mercer Boys manuscripts for a flat rate of two hundred dollars without royalties." In any case, the money went towards missionary work.

I came across Wyckoff when scouring the web for a series, or standalone, similar to The Three Investigators books by Robert Arthur and William Arden. The Mercer Boys appeared to fit the bill. Although the title I picked turned out to be a whole lot closer to the boy scout mystery that provided the opening quote for this blog-post. 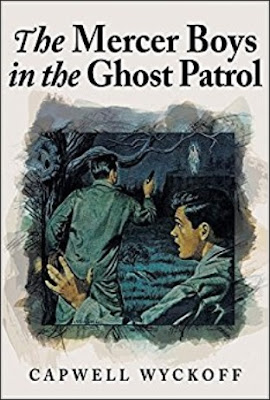 The Mercer Boys in the Ghost Patrol (1929) originally appeared under a more mundane book-title, The Mercer Boys in Summer Camp, which was the sixth book about Jim Mercer, Don Mercer and their close friend, Terry Mackson – who made their first appearance in The Mercer Boys' Cruise on the Lassie (1929). Yes, most of the books in this series was published in that years with a handful of additional novels appearing over the next couple of years.

During their second adventure (related in The Mercer Boys at Woodcrest, 1929), Jim, Don and Terry enrolled into Woodcrest Military Institute and became cadets. So this makes them slightly older than the protagonists from the other juvenile detective-and adventure stories I've read. I suspect they're somewhere in their late teens, around sixteen or seventeen, because a character mentioned the uniformed cadets were "too young-looking for regular soldiers," but they were allowed to carry side arms with permission – which happened towards the end of the story.

Otherwise, the plot is very similar to other juvenile mysteries, such as The Sleuth Patrol, which also has a story-line that's almost pure Scooby Doo. But the book-title probably gave that part away.

The Mercer Boys in the Ghost Patrol begins in early July and "the summer encampment was at hand," but opening of the book takes place in the school supply room where everyone was getting their camping uniform. Terry also picked up a feud there that would come to dominate the first half of the story. Cadet Dick Rowen gets into a tussle with the good-humored Terry, but ends up getting publicly humiliated and, spiteful as he is, tries to extract revenge on the three friends – such as messing with their bayonets, attempting to hurt one of their horses and placing several charges against one of the Mercer boys. A true pain in the ass for the three cadets.

However, this story-line slowly recedes into the background as the plot-thread about "the mystery of the ghost of Rustling Ridge" began to emerge from the shadows of the camp ground.

Colonel Morrell found a new camping ground, called Rustling Ridge, because the old camp spot was being encroached upon by the modern world and the colonel wanted "to get as far away from civilization" as possible. And the new ground certainly serves this purpose.

However, the place is not entirely bare of human settlements. The arrival of the cadets is definitely welcomes by one of the local farmers, Carson, because "business is mighty poor" and having to feed an entire regiment of hungry, young cadets is a much needed financial boost – which has been suffering under the frightful reputation of the local legend. A ghost prowls the ridge and has been chasing people away for several years. Soon enough, this spectral inhabitant of the ridge pays a visit to the camp.

The first brush with the ghost was a secondhand encounter: a number of nighttime sentries around the camp saw a wagon, with a man and a young boy in it, race past them like a bat out of hell. They later learn they were a father and son who saw the ghost. On the following night, the sentries have an encounter with "a white shape," but the apparition gets a more solid form when it eventually enters the camp ground.

Jim has a brief brush with "a tall white shape" in the woods where the horses are corralled, but the figure manages to escape by causing a stampede and this lands Jim in hot water. The figure is also held responsible for an arson case and the brief disappearance of the small daughter of the farmer. So the colonel decided to form a ghost patrol to put a stop to the specter's reign of terror over the scarce population of the ridge.

As said earlier in this blog-post, the story-line about the ghost is firmly planted in Scooby Doo territory and one of the villains is even overheard saying "those meddlesome cadets again." So you really shouldn't expect a ratiocinative detective story. For example, I strongly suspected the unpleasant, blustering sheriff of being the ghost, which I based on what I assumed was a genuine clue. The sheriff used a turn of phrase ("keep your nose out of the affairs on this ridge") that was similar to a warning left by the ghost on a piece of cardboard at the camp ("KEEP YOURE NOSE OUTN THE GHOST BUSINESS").

However, there's a short scene in which they attempt to follow a trail of footprints and the identity of the ghost is deduced based on perspiration and wet socks on a least-likely-suspect after the ghost was seen running away, but that was a minor and late element in the story. The Mercer Boys in the Ghost Patrol should primarily be read as a fun, mild-mannered adventure/mystery story that can (plot-wise) be classified as an ancestor of Scooby Doo. So that's definitely a point of interest for a juvenile mystery novel. Personally, I loved the backdrop of a summer camp of a military academy. A background that would also lend itself perfectly for a straightforward murder mystery. I wonder if there are any...

Anyway, I might try one or two more books from this series in the future. They seem like good material to intersperse with the ones about the previously mentioned Three Investigators and Case Closed. Speaking of the latter, I posted a review of vol. 59 a few days ago, but it got a bit snowed under since then. So you might want to take a look at that post.

That's it for now, but the next review will probably be of good, old-fashioned Golden Age detective story. So stay tuned!
Geplaatst door TomCat on 3/07/2017