Bill Pronzini and Marcia Muller's The Dangerous Ladies Affair (2017) is the fifth in their recent series of historical locked room mysteries about a pair of private-investigators, namely John Quincannon and Sabina Carpenter, who operate in the San Francisco of the late 1890s, but their first recorded case dates back more than thirty years – beginning with the eponymously titled Quincannon (1985). The characters would go on to appear in the splendid Beyond the Grave (1986) and a whole slew of short stories. Some of them were collected (e.g. Quincannon's Game, 2005), but the most recent ones are, as of now, uncollected. 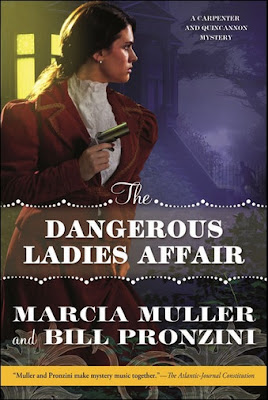 Several years ago, the stories about Carpenter and Quincannon were, sort of, rebooted as a series of full-length detective novels and sometimes materials from the short stories were expanded upon. Such as "The Bughouse Caper," from Quincannon's Game, which was taken apart and used as the basis for ongoing story-line about a scattered-brain figure, who claimed to be Sherlock Holmes, that began with The Bughouse Affair (2013) – finally concluding two novels later in The Body Snatchers Affair (2015). That last title was also an expansion of a short story, "The Highbinders," which was originally published in Carpenter and Quincannon: Professional Detective Services (1998).

I bring this up because The Dangerous Ladies Affair consists of two separate, non-overlapping investigations and Quincannon's case is an expansive rewrite of two short stories, but still managed to be my favorite part of the book.

Quincannon is engaged by the President of the Woolworth National Bank, Titus Wrixton, concerning "a matter of some delicacy that demands considerable discretion." Someone is trying to extort money from the bank president and the blackmail material is related to a personal indiscretion. And he already coughed up five thousand dollars! As to be expected, there's another demand for money and now Wrixton wants Quincannon to retrieve the indiscreet letters he wrote, which gave the latter an idea.

Wrixton handed over the money to "an emissary" of his blackmailer, a short, hooked nose person, who'll probably be at the bar of the Hotel Grant to receive the second payment and Quincannon is determined to follow him back to the person behind the blackmail scheme – except that what he finds is of those "seemingly impossible conundrums." The name of the emissary turns out to be Raymond Sonderberg and he owns a small cigar store in Gunpowder Alley, but when Quincannon arrives shots ring out from the locked store.

After two doors are broken down, Quincannon and a passing patrolman find the body of Sonderberg with two bullet holes in the chest, but how did the murderer manage to vanish from what is, essentially, a double locked room? Sonderberg's body was found in a bolted room with the only window latched from the inside and the front door of the shop was also locked from the inside. So how did the murderer enter and leave the premise?

The locked room part of Quincannon's case had an earlier life as "Gunpowder Alley," originally published in a 2012 issue of Ellery Queen's Mystery Magazine, which made the explanation not as big a surprise as it could have been. However, this is still a nice little section that focuses on the how of the crime, because the murderer never makes an appearance in the first half of this case, but the observant reader can probably make an educated guess out of which direction the wind is blowing – as well as working out the locked room trick based on a thud and a description of something at the crime-scene.

Second half is basically a chase tale in which Quincannon is trying to bring the cheeky murderer to earth and the source material of this part is "Burgade's Crossing," which came from the pages of a 1993 issue Louis L'Amour Western Magazine and was collected in the aforementioned 1998 short story collection. So lot's of old material was reused for this case, but, as said above, it's still my favorite part of this novel.

Meanwhile, Sabina Carpenter is consumed by an entirely different kind of problem: she has been participating member of the Golden Gate Ladies' Bicycle Club for several weeks and she did so at the encouragement of her new friend, Amity Wellman – who's the head of an organization dedicated to getting women the right to vote in California. Lately, she has been getting religiously tinged letters that could be perceived as a threat and she has a fair share of potential enemies. Such as the leader of the anti-progressive Solidarity Party, named Nathaniel Dobbs, but there's also a man with whom she briefly had an extramarital affair, Fenton Egan. A married man with a very jealous wife, Prudence.

So there was more than enough plot-material for an interesting case, especially after an attempt on Wellman's life, but practically the entire story consists of Sabina poking a stick in Wellman's opposition. A murder is committed towards the end of this story-line, but one that's solved almost as quickly as it was presented and only seemed to be introduced to give the story a morally ambiguous ending when Sabine covers up the murderer's guilt.

I found it increasingly difficult to get into this part of the book and even became annoyed at times by Sabina's partisan behavior. Such as when she decided to play apologetics on behalf of her friend at the home of the Egans. Sure, Prudence is a vengeful woman with her own dirty linen, but saying that Wellman's work as a woman's activist makes her especially "entitled to understanding and forgiveness" is not an argument. She was basically asking Prudence why she was such a sour puss about Wellman sleeping with her husband when she was doing such a good job as suffragette. Hey, I borrowed your car for a week or two without you knowing, but don't be mad, I also feed the needy and homeless at the soup kitchen.

So, plot-and storywise, I feel very divided about The Dangerous Ladies Affair and would not rank it as high as, say, the first two entries in this series, but still very much enjoyed the case and chase handled by Quincannon. I always liked him as a character and consider him to be one of the great detective-characters who emerged in the modern era. So the ending of this novel is a much deserved one. And also showed that, perhaps, the series is winding down and drawing to a close.

Well, that was my rambling for this blog-post and not sure what will be next, but it might be a re-read. Because, you know, that TBR-pile does not really need any continued and sustained trimming or anything. ;)
Geplaatst door TomCat on 3/15/2017