Tricks of the Trade

"In the stock market—and I know just enough about the market to know that money begets money—it is possible to make or lose millions in an hour."
- Prof. Augustus S.F.X. van Dusen (Jacques Futrelle's "The Problem of the Vanishing Man," collected in Great Cases of the Thinking Machine, 1977)

Willoughby Sharp was born into a wealthy, prominent New York family and briefly followed in his father's footsteps as the head of a brokerage firm, but this endeavor only lasted three years and moved his family to island of Bermuda – where they lived from the "judicious sales of costly pieces of jewelry" that Sharp had bought his wife during the 1920s. Upon his return to New York, Sharp entered the world of publishing and even became the author of a pair of obscure, long-since forgotten mystery novels. 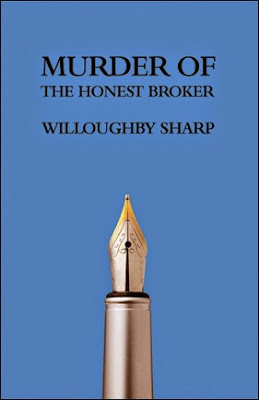 Fortuitously, Murder in Bermuda (1933) and Murder of the Honest Broker (1934) were reissued by Coachwhip in 2013 and Curt Evans wrote an extensive introduction of roughly thirty pages. One that was littered with Van Dinean footnotes, sometimes eating up the bottom half of a page, but the biographical details were very interesting and one event of note was the brutal murder of Sharp's ex-business partner, Claude Kendall – a notorious publisher of controversial and banned books. Evans wrote a short piece about this case on his blog, entitled "Murder of the Publisher: Who Killed Claude Kendell," which (sort of) is provided with a possible answer in the comment-section.

A second, unsolved mystery brought up in the introduction concerned a third detective novel, that was announced, but never published!

For 1935, Sharp had promised a second case for the policeman character from his previous novel, Inspector Bullock, which was to be titled The Mystery of the Multiplying Mules and even supplied a very enticing synopsis. Reportedly, Bullock is called in by Logan family, not because something was stolen, but something had been added to their property. On three successive Friday mornings, they've found strange mules "in their locked barn" and "three deaths follow in rapid order." Sadly, the book was never published, or even written, and can be added to this depressing list of lost manuscripts and unpublished detective novels. Something that becomes even more depressing when you realize the locked barn might have provided the plot with an impossible situation.

Thankfully, we can still get our greedy hands on the two mystery novel that did roll off the printing press and my choice fell (for no specific reason) on The Murder of the Honest Broker.

The broker of the title is Philip Torrent, who may be an honest stockbroker, but the opening of the book shows he's surrounded by a coterie of would-be assassins and all of them are lavishly supplied with a variety of motives. One of them is his business partner, Temple Hastings, who defrauded him to the tune of "three hundred and eighty thousand two hundred and forty-seven dollars," but the timely passing of Torrent would put Hastings in the clear. Torrent also has a nephew, Howard, who, according to his uncle, has only ambition and that's "to drink dry every hotel, restaurant and speak-easy in the city." So he refuses to supplement his nephew's monthly allowance. The stockbroker is also a silent partner of Chipo Marinelli, who runs a speak-easy, but Torrent wants to cash-out and this means that the barman has to cough up seventy thousand dollars. But there are also some personal motives. 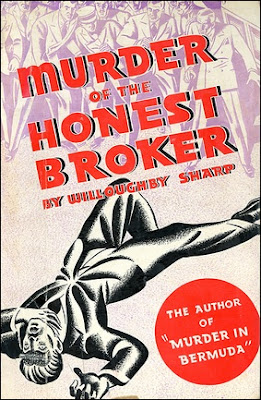 Mrs. Mary Torrent is unfaithful to her husband with another stockbroker, Jack McDonald, who wants to marry her, but her husband "refuses a divorce on any grounds." However, Philip Torrent also has an extramarital affair with one Lucy Laverne, but when he ends their affair she promises that he will "live just long enough to regret it."

So there are more than enough suspects to go around when Torrent collapses on the floor of the Stock Exchange.

Enter Inspector Francis X. Bullock of the Homicide Squad: a great, red-faced giant of a man, "brusque of speech and direct of manner," who has been overheard commenting with "Irish fluency, causticity and blasphemy" of the subject of certain class of "mythical and infallible beings" - namely the storybook detective. Bullock would love to meet "one of those mincing, namby-pamby know-it-alls" and put his hands around one of their "damned supercilious necks." He even echoes Sgt. Beef from Leo Bruce's Case for Three Detectives (1936) when condemning their "Egyptian mummies and their stuffed fish and their underground passages and their slant-eyed, Chinese hatchet men."

Regardless of Bullock's antipathy for Philo Vance, Drury Lane and Thatcher Colt, the police inspector gives away a grand performance as one of the Great Detectives of the Printed Page. A remark he would no doubt answer with absolute contempt (see ending).

A problem facing Bullock is having to uncover the common denominator between the poisoning of Philip Torrent and the death of Sandy Harrison. Only a short time after Torrent collapsed, Harrison was thrown in a similar convulsion in his office on the top-floor of the Stock Exchange, but there doesn't seem to be a motive for killing both men within the same quarter of an hour. And then there's the tricky question how a deadly quantity of curare could have been introduced into the bloodstream of both men.

Slowly, but surely, Bullock pieces together the truth based on scraps recovered from the paper-strewn floor of the Stock Exchange, a red metal pencil, a phonograph needle that was not smeared with poison and a passage from South American history. One thing that was, sort of, impressive is how the origin of the poison was actually used as a hint. Usually, the presence of curare is nothing more than to give a story a tinge of the exotic, but here it actually functioned as a clue of sorts and helped put Bullock on the right track – demonstrating that Sharp knew his way around a plot.

The method for administrating the poison, as well as the deadly connection between both murders, clearly showed the ghoulish ingenuity we so gleefully associate with the genre's Golden Age. However, I was somewhat less enthusiastic about the revelation of the murderer.

In my opinion, the culprit in Murder of the Honest Broker was a little too well hidden from the reader, which somewhat weakened the obvious attempt by Sharp to play completely fair with his readers. I suppose it still qualifies as a fair play mystery novel, but not a perfect textbook example of how the least-likely-suspect card should be (ideally) played. What was interesting about this aspect of the solution is how much the murderer's actions resembled those of the culprit from Max Rittenberg's 1914 short story, "The Mystery of Box 218," which can be read in The Invisible Bullet and Other Strange Cases of Magnum, Scientific Consultant (2016). There's even a similar sort of relationship, but how or what would be spoiling both stories. I just wanted to point out that there's remarkable similarity in the solutions of both stories.

So, all in all, Murder of the Honest Broker was not bad, not bad at all, which comes with an authentic backdrop and some ingenuity as far as the method is concerned, but the highlight of the book the presence of Bullock – who does not, exactly, hover inconspicuously in the background. He forcefully takes center-stage of the story and I would not have it any other way. It also makes the loss of his second recorded case all the more depressing.

Who knows... maybe one day a yellowing, crumbling manuscript of The Mystery of the Multiplying Mules is excavated from a bottom drawer or a dusty, long-forgotten archive. Until then, I'm glad this one got reprinted and I'll be taking a look at Murder in Bermuda sometime in the future.
Geplaatst door TomCat on 3/25/2017