Clue to the Labyrinth

"The whole story is now before you: clues galore, I give you my word; and when put together in the proper order and the inevitable deductions drawn, they point resolutely to the one and only possible criminal."
- Ellery Queen ("Challenge to the Reader" from The American Gun Mystery, 1933)

Philip MacDonald was a horse-and dog breeder, screenwriter and a crime-and thriller novelist who pioneered the modern serial killer genre with such novels as Murder Gone Mad (1931), The Mystery of the Dead Police (1933) and the very late The List of Adrian Messenger (1960), but MacDonald was also credited with penning a few genuine detective stories – some of them made it into Robert Adey's Locked Room Murders (1991). Rest assured, this is not going to be yet another piece on some obscure locked room title. Something else found its way into my hands! 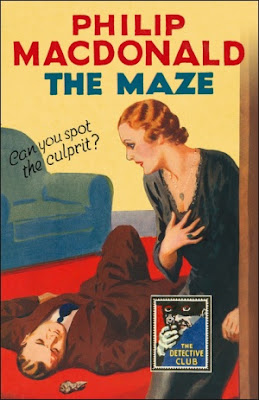 Recently, the Collins Crime Club, an imprint of HarperCollins, reissued an experimental detective story by MacDonald, The Maze (1932), which is alternatively titled Persons Unknown and originally had a good subtitle – namely "An Exercise in Detection." I think the description is very appropriate for a book that can best be described as a novelization of the "Challenge to the Reader" concept that Ellery Queen introduced in The Roman Hat Mystery (1929).

MacDonald stated in his preface that he had "striven to be absolutely fair to the reader." Or, as he described it, The Maze is a completely fair story that places the reader and his detective "upon an equal footing" by giving both parties all of the information in exactly the same form. The lion's share of the book consists of a lengthy transcript of a Coroner's inquest and this verbatim report barely leaves any room for fanciful prose or shrewd characterization, which makes this the storybook equivalent of a crossword puzzle or chess problem.

So this is not mystery novel everyone will be able to enjoy, but connoisseurs of the pure, problem-oriented and clue-strewn detective stories will no doubt be able to appreciate it.

The Maze opens with MacDonald's series-detective, Col. Anthony Gethryn, receiving a letter from the Assistant Commissioner, Sir Egbert Lucas, while on holiday abroad and the reason for this intrusion pertains an extraordinary case – one that could benefit from a fresh pair of eyes and a rested brain. Sir Egbert has enclosed the court transcripts from the inquest, all of them, and wants Gethryn to peruse them at his leisure to see if he can spot anything the police might have missed.

The problem MacDonald poses is of the classical kind: on the night of the 11-12th July, in the private study of a Kensington home, the head of the household, Maxwell Brunton, is murdered under bizarre circumstances. Brunton's right eye had been penetrated by a large lump of gold quartz with a long, blood-covered spur that had pierced the brain. A very unusual murder weapon and circumstances suggests the murderer must be one of "the inmates of the house," but, as the transcript shows, there's "a perfect gallimaufry of motive" that correspond with a number of potential suspects. 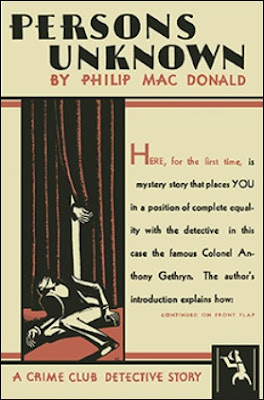 First of all, there's the victim's wife, Enid Brunton, who was "persistently harrowed" by her husband's constant infidelity. One of the women entangled in a liaison with her husband was her best friend, Mary Lamort, who was staying at the home at the night of the murder. Adrian Brunton is the only son of the victim, but his motive is threefold, because his father disapproved of the woman he intended to marry and that angered him. And there's also the huge inheritance. Claire Bayford is Maxwell Brunton's daughter, who widowed young, but she has invited a guest over at the home, Peter Hargreaves, which, for some reason, annoyed her father – as well as providing a potential motive during the inquest. Finally, there's the secretary and number of servants. All of them make testimonies and some even emerge as potential suspects.

You should take note that all of these characters only appear to the reader as named in the transcript. The only allowance given to characterization is how they talk (i.e. accents) or how they responded to the Coroner's questions (i.e. elusive or outright rude).

Gethryn acknowledged how the lack of a human element hampered him, which resulted in some self-reflection on my part, because, as a plot-oriented reader, I tend to snarl at characterization, but MacDonald effectively showed that a pure, undiluted and plot-driven detective story can have its limitations – which makes my failure all the more embarrassing. I completely failed in getting anywhere near the correct solution. Not even close!

I'm not entirely sure how fair the motive actually was, which seemed very modern for a 1930s mystery novel, but I should have identified the murderer. So that pretty much shattered my self-image as a brilliant armchair detective and crushed any ghost of a dream of becoming, as MacDonald advised in his preface, "a really big noise at Scotland Yard." However, that's also part of the fun of The Maze and this aspect should not disappoint any mystery reader who loves to match wits with the detective. As a matter of fact, if you're that kind of (thinking) reader, you should launch this title to the top of your wish-or TBR list. I also suspect fans of the Van Dine-Queen School of Detective Fiction will be able to appreciate The Maze.

So, now that we got the review out of the way, I want to end this blog-post with an observation about the book and author: MacDonald wrote The Maze around the same time he moved to Hollywood, which made me wonder if the book, for him, was also a writing exercise. It's practically written like a movie script. I got the strong impression he was practicing to build a story and distinguish characters with nothing but dialogue. Why not? You pen a pure detective story and simultaneously garner some experience for your second line as a scenarist. You kill two birds with one stone. It makes sense, right?
Geplaatst door TomCat on 3/26/2017