The Sword of Cortés

"We won't let any headless horses get the better of us."
- Lord Peter Wimsey (Dorothy L. Sayers' "The Undignified Melodrama of the Bone of Contention," from Lord Peter Views the Body, 1928)

The Mystery of the Headless Horse (1977) is the twenty-sixth recorded case of Jupiter "Jupe" Jones, Pete Crenshaw and Bob Andrews, "those maddeningly industrious young sleuths," but only the eighth novel a well-known pen-for-hire, Dennis Lynds, contributed to the casebook of The Three Investigators – all of them appearing under his penname of "William Arden." I think this was one of his stronger efforts.

Jupe, Pete and Bob hail from Rocky Beach, California, which plays a bigger role than usual in this semi-historical mystery-and adventure novel. 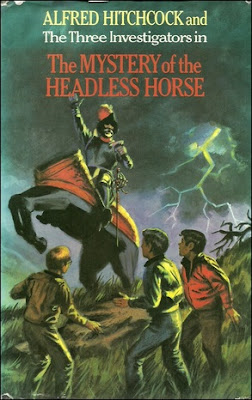 Surprisingly, The Mystery of the Headless Horse opens on the front-steps of Rocky Beach Central School, because the reader rarely gets a glimpse of their school activities. They always seemed too busy living the Jonny Quest lifestyle to hang around with classmates once the afternoon bell ended a school day, but Pete was asked by a fellow student, Diego Alvaro, to bring Jupe to the gate of the athletic field after school. Pete got the impression he wanted to talk about something important.

Diego comes from an old Spanish bloodline dating all the way back to the time when Europeans first came to the New World and one of his earliest ancestors, Carlos Alvaro, was a soldier with "the conquistador Hernando Cortés when he defeated the Aztec Empire" and "conquered southern Mexico" - which was all the way back in 1521. A century or two later, Rodrigo Alvaro decided to settle down in the area of present-day Rocky Beach and asked the provincial governor of California for a land grant. Governors of Mexico and California were allowed to give away grants on behalf of the King of Spain.

So the Alvaro family came into possession of five square leagues ("more than twenty-two thousand acres"), but the estate has since dwindled to a mere one hundred acres of land.

A barely profitable piece of land with a recent mortgage attached to it. However, the property is greedily eyed by their neighbor, Mr. Norris, who wants one huge ranch by buying up all the land surrounding it. Mr. Norris is also the father of the arch-nemesis of the three detectives, "Skinny" Norris, who makes his last appearance here, because, this time, his actions has consequences.

So, in order to keep their land, Diego and his older brother, Pico, need to raise money and they decided to sell the furniture, art, books, tools and such that the family has accumulated over several generations and the person who would gladly pay a good price for them is Jupe's Uncle Titus – who owns the Jones Salvage Yard that's famous along the entire coast of southern California. However, a fierce brush fire claimed the Alvaro home and the barn they used as a storage for their family treasures.

Jupe, Pete and Bob are left with only one, very remote, chance to help Diego save what's left of his family estate: solving a 130 year old family mystery about a missing, gem-encrusted sword that was lost during the Mexican War.

After the brush fire, the boys discovered that the wooden statue of Cortés on horseback, which stands on a ridge looking out over the land, had the head of the horse knocked off when a cylinder of fire-retardant chemicals was dropped from a helicopter or plane. But this accident led them to the discovery of a very old sword cover inside the hollow neck of the horse's head. A discovery that immediately brings the family legend of "the Cortés Sword" to mind. 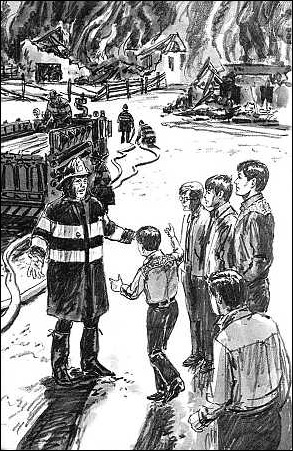 According to the Alvaro family history, the previously mentioned Carlos, "the first Alvaro in the New World," once saved his fellow soldiers from an ambush and Cortés presented him with a ceremonial, gem-encrusted sword with a solid gold hilt as reward for saving their lives. The sword had been given to Cortés by the King of Spain. So the sword became a treasured family heirloom for hundreds of years, but went missing in 1846, at the start of the Mexican War, when Sebastián Alvaro was reportedly shot by American soldiers when trying to escape arrest and was seen falling into the ocean – with a sword in hand.

The case looks pretty hopeless and the trail has been stone cold for more than a century, but the boys do a marvelous job at reconstructing the past. Admittedly, they act here more as historians than as detectives. A good portion of their investigation is done at the Rocky Beach Public Library, Rocky Beach Historical Society and the County Land Office where they go over old newspaper articles, letters bound journals of local residents from the nineteenth century, US army reports and crumbling maps.

What they find are some interesting inconsistencies in the reports about Don Sebastián's death and the fact that all of the soldiers who were involved with the arrest deserted, and thoroughly disappeared, after they filed their report. They also astutely identified an apparently non-existent place, called "Condor Castle," in one of the old letters. Obviously, Arden attempted to impart a little bit of knowledge to his young readers. Not just by giving them some historical pointers, but also showing the value of proper research, critical reading of texts and to not always accept everything on face value, but to think for yourself – which is the best kind of advice any kind of mystery novel could give you.

I'm not sure how much the youngest readers of this series would appreciate the historical examination of the past, but, surely, the older readers will be able to enjoy it. I should also point out that Arden took a similar approach with the plot of The Secret of Phantom Lake (1973), but I think it worked much better in this one.

Well, The Mystery of the Headless Horse is not just about digging into old archives, studying even older maps and flipping through yellowed, brittle pages. They also have to deal with the aftermath of the brush fire, which gets Pico arrested, coming on top of the meddling by Skinny and the Norris' ranch manager, Cody. All of this leads to a tight spot somewhat reminiscent to the cave exploration from Arden's The Mystery of the Moaning Cave (1968), but the cherry on top is when Jupe figured out where Don Sebastián had hidden the sword. A solution that tore a page from Edgar Allan Poe's famous "The Purloined Letter," a short story from 1844, which was a nice revelation and a good way to end a long, exhaustive search. I do have to wonder if the sword could really have been hidden there, for a 130 years, without being found sooner, but that's really nitpicking on my part.

So, all in all, another fun, amusing and even clever entry in this series and would even place the book among my small list of favorites, which is currently made up of The Mystery of the Whispering Mummy (1965), The Secret of Skeleton Island (1966) and The Mystery of the Shrinking House (1972). Guess that makes The Mystery of the Headless Horse number four on that list and that's not bad considering I read about a dozen titles from this series.

I'll probably return to this series before too long, but the next blog-post will be of a good, old-fashioned Golden Age detective. I'm just not sure yet whether it'll be a regular whodunit or a locked room mystery. Only time will tell, I guess.
Geplaatst door TomCat on 4/01/2017