Some months ago, I reviewed two short stories by Jon L. Breen, "The House of the Shrill Whispers" (1972) and "The Problem of the Vanishing Town" (1979), which are gentle, but expertly done, parodies of John Dickson Carr's Dr. Gideon Fell and Edward D. Hoch's Dr. Sam Hawthorne – two iconic detective-characters who are inextricably linked to the timeless locked room mystery. Breen is the genre's resident satirist and has taken the mickey out of many of the greatest mystery writers. 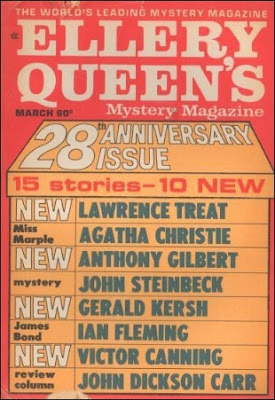 Frederick Dannay was one half of the bodily incarnation of the American detective story, "Ellery Queen," who invited Breen to take a shot at the Ellery Queen character. The result is a parody hearkening back to "the early Ellery of the pure-puzzle days." Naturally, there's a dying message and a challenge to the reader.

"The Lithuanian Eraser Mystery" was originally published in the March, 1969, issue of Ellery Queen's Mystery Magazine and reprinted in the anthology Ellery Queen's Eyes of Mystery (1981).

E. Larry Cune is a world famous detective and "The Lithuanian Eraser Mystery" takes him back to "the scene of his first great triumph," Greek Theatre, where he solved the murder of an asthmatic audience member, Mr. Anagopolous – a case commonly known as The Greek Coughin' Mystery. There are many more of these sly nods and winks in the story to EQ ("this is a calamity, Towne").

Orson Coward's new musical comedy, Gold, is debuting at the Greek Theatre and Cune is in the audience, but realizes that his mere presence put "the fear of sudden death in all those around him." The great detective hasn't attended a play or party without having "to solve a murder at some time during the festivities," because potential murderers are champing at the bit "to match wits with him." By the way, this "match wits" line also appears in the challenge to the reader. So is this story where the 1975 Ellery Queen TV-series got the idea for the famous "match wits with Ellery Queen" line? I don't remember it ever being used in any of the novels or short stories. Anyway...

Something is definitely happening, or has happened, backstage. When the show begins, the songs are out-of-order and during the intermission, Cune is told that Coward has been murdered. A weighty volume, entitled The Complete Wit of Orson Coward, appears to have been the murder weapon.

Cune deduces Coward expected to be murdered, but, when he saw Cune sitting in the audience, he knew it was going to be that night and left him a clue to help him identify his murderer, which Coward did by rearranging the songs – a predying message, if you will. Usually, in a detective parody, the answers to these kind of problems are nonsensical (e.g. "The Problem of the Vanishing Town") or disappointing, but the predying message can (sort of) be solved. I think the key to the meaning of the first, out-of-order song, "Never Been Kissed," is a bit more nebulous than "Alone in My Solitude" and "I Know the Score Now." However, if you get those last two, you can probably guess the answer to the first. And certainly pick the murderer's name from the cast of characters.

What has the Lithuanian eraser of the story-title to do with this theatrical mystery? Well, that's the punchline of the story. Something you have to read for yourself.

All in all, "The Lithuanian Eraser Mystery" is another excellent parody by Breen, who understands the writers he's lampooning, which is what makes them work and this time it even has a clever take on the dying message, but, more importantly, it was funny. My favorite scene is perhaps when Cune walked on stage to tell the audience there has been an unfortunate accident and immediately "men with black bags began making their way to the aisles all over the massive playhouse" (no, we don't need doctors, he's quite dead). This story should have made it into The Misadventures of Ellery Queen (2018). Definitely recommended, especially if you like Ellery Queen. Or simply in the mood for something light hearted and short.
Geplaatst door TomCat on 7/23/2019