In my previous blog-post, I reviewed "The Bizarre Case Expert" (1970) by Dennis Lynds, published as by “William Arden," which was reprinted in Ellery Queen's Master of Mysteries (1975) and the brief introduction to the story noted an increase in submissions of impossible crime stories to Ellery Queen's Mystery Magazine – suggesting that the "the locked-room 'tec theme" was experiencing a renaissance at the time. So this prompted me to grab another short impossible crime story from the early 1970s as a follow up.

Jon L. Breen is an acclaimed critic and reviewer, who presided over The Jury Box column in EQMM from 1977 to 2011, but his most endearing contribution to the genre is as a premier short story writer of parodies and pastiches. He penned more than a hundred of them! 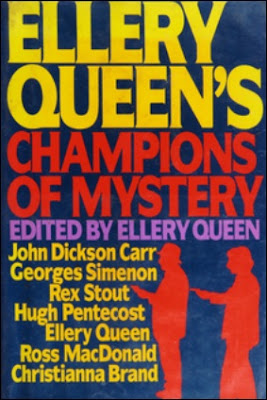 Back in 2012, I compiled a short list of parodies, pastiches and homages to everyone's favorite mystery writer, John Dickson Carr, which include William Brittain's "The Man Who Read John Dickson Carr" (1965), William Krohn's "The Impossible Murder of Dr. Satanus" (1965) and Norma Schier's "Hocus-Pocus at Drumis Tree" (1966), but Breen was a notable absentee – while he arguably wrote one of the best parodies of master. Only the little gem of a spoof by Brittain is better.

"The House of the Shrill Whispers" was originally published in the August, 1972, issue of EQMM and reprinted in Ellery Queen's Champions of Mystery (1977).

The story opens in a first-class train carriage where Millard Carstairs meets Nancy Williston and they discover they're both headed to The Clifton Place in Warwick-on-Stems. A place better known under its ominous pet name, The House of the Shrill Whispers, where "the ghost of old Admiral Wilburforce Cogsby" has been seen walking "on July 12 of the last year of every decade since 1880." This ghost story is eerily similar to the impossible situation in John Russell Fearn's "Chamber of Centuries" (1940). Lamentably, nothing of note is done with this ghost story. There is, however, an impossible murder looming on the horizon.

Sir Margrove Clifton is the owner of The House of the Shrill Whispers and shortly after altering his will, cutting off three of his children, he has received death threats and as a precaution he has barricaded himself in the guest cottage – secured from the inside with triple-locks and triple-bolts. The cottage was surrounded by artificial snow and four spotlights illuminated "the premises from sunset to sunrise." There were eighteen private-security agents from the Pinkerton agency who guarded the cottage, but all to no avail, because Sir Margrove is murdered. On top of that locked room murder, it turns out that something very large has disappeared from the crime scene. The whole situation was "impossibly baffling."

By the Luck of Lavington, Millard discovered an old friend on the train, Sir Gideon Merrimac, who's the world's greatest detective and "a chuckling blend of Dr. Gideon Fell and Sir Henry Merrivale." An enormous presence with ruddy cheeks, two monocles (one in each eye) and a flowered handkerchief into which "its proprietor periodically wheezed with earth-shattering volume." This presence is packaged in a black opera cape.

Sir Gideon Merrimac is a splendid parody of Carr's often larger-than-life detective characters and Breen has given him a great line that will make everyone who's read The Hollow Man (1935) smile: "if we were characters in a novel instead of characters in a short story, I'd discourse with you at appropriate length about the foolishness and absurdity of characters in fiction pretendin' they're real." So, purely as a parody, this story is a success.

Unavoidably in a parody, the solution to the bizarre and baffling locked room murder is extremely disappointing, but this is made up by three things: the surprising amount of clueing, the identity of the culprit and the unique motive for the murder, which was delightfully meta. And to be honest, it was necessary for the solution of the locked room to be a letdown to make the rest of it work.

All in all, "The House of the Shrill Whispers" is a funny, well-written parody of Carr with a beautifully imagined, Spitting Image-like caricature of his two famous detectives melted into one character, but it's disappointing that such a wonderful parody of Carr has a disappointing locked room-trick. Even if it was necessary for the plot to work. Still a very enjoyable story.

On a final, unrelated note: I found a practically unknown Dutch mystery novel from the 1930s for my next read and it looks, if it turns out to be any good, to be something along the lines of Christopher Bush. So stay tuned!
Geplaatst door TomCat on 5/25/2019