F.A. Haak-Ochsendorf was a now obscure, long-forgotten Dutch author of children's fiction and verses, but, under the penname of "F. van Overvoorde," she produced two equally obscure, little-known detective novels – entitled Moorden in Maastricht (Murders in Maastricht, 1937) and De groene draak (The Green Dragon, 1939). She has become so obscure that the only relevant piece of information I was able to find came from an archived newsletter briefly mentioning her second detective novel. 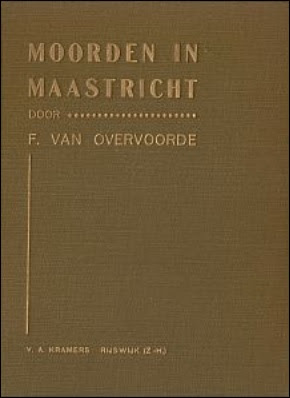 The Green Dragon is set in a boarding school, De Voorden, which encompasses three adjacent estates: De Voorde, Overvoorde and Steenvoorde. Apparently, there was a Catholic boarding school in Steenvoorde between 1922 and 1944. The boarding school was destroyed during a failed launch of a German V2 that killed fourteen people. So my guess is that Haak-Ochsendorf worked with children and very likely had some sort of a link to De Voorden. And adopted the name of one of the estates as a pseudonym.

I ended my previous review with a little teaser how I found an obscure Dutch mystery novel, namely Murders in Maastricht, which promised to be something along the lines of Christopher Bush. Well, I wasn't completely wrong, but Van Overvoorde is bush-league compared to the master of the unbreakable alibi.

Murders in Maastricht is narrated by a Dutch-Hungarian female journalist, Mia Oroshàza, who's a roving reporter for the Nieuwscourier (News Courier), but the story begins with her traveling to Maastricht with a group of friends – a city in the southern region of the country famous for its traditional, three-day carnival. The festivities begins with "the traditional opening of the Maastrichtian carnival," eleven cannon shots, followed by dancing, drinking, partying and drinking. Craig Rice would have been proud!

A three-day, costumed bender, but at the end of the third day "the realm of Prince Carnival" is drawing to a close and Mia has gathered with her friends at a club. Everyone's in costume. This becomes a problem when the manager interrupts the last minutes of the party to announce that someone has died. And it looks like murder.

The victim is Chief-Inspector Bob Smeele, of the Utrecht Police, who is a part of Mia's group and his body was found slumped in a chair, beneath a staircase, in a dimly lit hallway with a gunshot wound. Smeele was fully clad in a cowboy costume and a revolver (with silencer) was laying on the coffee table in front of him, but obviously, this was murder. Not suicide. So enter Inspector Floris van Flierop, nicknamed "F.F.," who allows Mia to function as his unofficial assistance.

Murders in Maastricht should have been titled Murder Among Friends, because the only suspects are found within her circle of friends and some minor characters who are peripherally involved.

This group consists of a colleague of Smeele and Mia's love interest, Peter Giesink. Bella Yntema is a long-time friend of Mia, a friendship dating back to their college days, who's dating the handsome, aristocratic "Lion" Duraval – a born Maastrichtian and party guide to his friends during carnival. Ella Smeele is Bob's younger wife who had been called back to Utrecht to attend to their sick, two-year-old son, Bobbie. During the festival, two acquaintances of Yntema, Charles and Alice Janssen, join the group of friends. Mia and F.F. have to figure out who of these people had motive and alibi, or lacked them, which is complicated when they suspect the murderer might have walked around in an identical cowboy costume as Smeele. The investigation brings Mia from Den Haag, Utrecht and Maastricht to Paris and the Riviera. 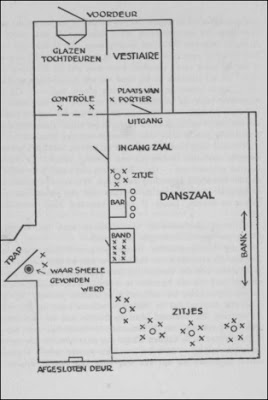 So there you have a pretty solid premise for a good, old-fashioned detective story, but Van Overvoorde was more interested in storytelling than plotting. Many irrelevancies smother some of the good, if simplistic, plot-ideas.

A second murder is committed around the halfway mark when a woman is found brutally stabbed to death in a garden shed, but, while she had a connection to Bob Smeele, she was killed by a character outside of the main story – an actual unknown X-character! I was not amused. You can say about the attempted murder of Mia in a dark movie theater during a screening of a detective movie, De bloederigen vingerafdruk (The Bloody Fingerprint), but this turned out to be a completely irrelevant plot-thread. And committed by an unknown character who's only mentioned after being arrested. What a way to a great set-piece!

There were, however, some good points that deserve mentioning. The choice of murderer was excellently done and genuinely felt as a (psychological) inevitability, in spite of the red herrings that were dragged across the trail, which found good use for the clues found in the children-and fairy tale books. The alibi-trick was a bit prosaic and is to the alibi story what a piece of string and a thin pencil is to the locked room mystery, but it fitted the murder and the murderer's actions. So I can be forgiving of that. I also liked the two crime-scene maps. Even if they were completely useless.

So, all things considered, Murders in Maastricht is a very uneven mystery novel and, on a whole, a pretty average detective story that sorely lacked any kind of ingenuity, but I can't help feel a little protective of these Dutch Golden Age mysteries. My country doesn't have as rich a history as America and Britain, full of iconic writers and novels, but I always find a joy to see one of these stories play out in my own backyard. Even when they're not entirely up to scratch. So I'll end this review by saying that my country has produced far better and more ingenious detective stories than Murders in Maastricht, but also churned out some pretty bad and much worse specimens.
Geplaatst door TomCat on 5/30/2019