The Case of the Haven Hotel (1948) by Christopher Bush

Christopher Bush's The Case of the Haven Hotel (1948) is the thirty-third entry in the voluminous Ludovic Travers series, co-starring Superintendent George "The General" Wharton, which is one of those charming, typically English seaside resort mysteries – comparable to Agatha Christie's Peril at End House (1932), Nicholas Brady's Week-end Murder (1934) and John Rowland's Calamity in Kent (1950). This makes it one of Bush's more leisurely paced detective stories. 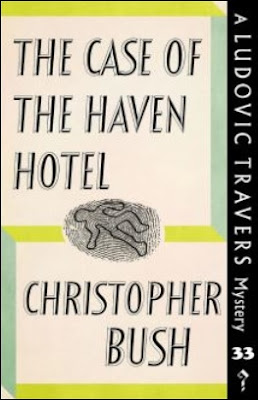 The Case of the Haven Hotel begins with a brief introduction of the two series-detectives, Travers and Wharton, in which the former explains how "long years in the company of George Wharton" has matured him. Travers' introduction to Wharton is truly excellent. Showing why they're perhaps my favorite team of detectives.

This brief overview ends with a challenge to the reader, of sorts, in which Travers tells the reader they'll "be troubled by no more descriptions" and "conversations there will be," but warns the reader not to mistake it for "aimless chatter," because every bit of chit-chat will probably contain a clue – pruned and edited to give everything its real significance. He was not lying.

With their wives away, Travers and Wharton "manoeuvred a fortnight's holiday together" at the Haven Hotel, Sandbeach, for the first two weeks of July.

Sandbeach is one of the last seaside strongholds where the upper classes still have their "decorous holidays" with their children and nannies. They play golf. Lounge in chairs on the hotel lawn or on the beach and go for the occasional swim in the sea, but these are the immediate post-war years of scarcity, strict rationing and long queues. So the black marketeers are doing booming business and Wharton has to postpone his holiday a couple of days, because he has to cover for a colleague who's working on the black market stuff. However, Wharton gives Travers the name of Sandbeach policeman, Inspector Fry, who has something that might interest him. This meant mixing pleasure with business.

Travers goes to the Haven Hotel ahead of Wharton and meets the people who would come to play a role in a pair of murders and attempted murders.

Mr. Havelock-Rowse is the affable, but status-conscious, owner of the hotel who wanted all his guests to feel they were in a home from home. Jeffrey Worne is the venerated author of the highly-praised Scarlet May and prides himself on being "the only serious novelist in England who's never attempted a detective story." Worne is staying at the Haven Hotel to write his next book and everyone's "wondering if they're going to be in it." There's a ravishing ex-Commando, Major Brian Huffe, who has a mutual attraction with another guest, Barbara Channard, but she wears a wedding ring. Old Peckenham is "a most distinguished-looking old chap" and used to be in the church, but Travers comes to the conclusion that he is "a consummate and artistic liar" when he told him a personal anecdote about his time on Bikini Atoll – which was lifted, word for word, from an article in the National Geographic Magazine. A timely reference to the Atom bomb test at Bikini.
Lastly, there are some minor characters. Mrs. Smyth looks like a motherly old soul, but very little what happened at the hotel escaped her eyes or tongue. Peggy is a prying chambermaid who was seen listening at Worne's keyhole. And this party is rounded out by a abominable child, Gerald, who some wish was carried away by the tide. 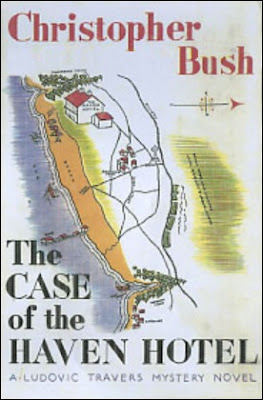 During his first days, small, but strange, things happen. Travers and Huffe have the unshakable feeling that they had seen Worne before. Travers even notes that Worne had dyed his hair black. Inspector Fry thought he had seen Peckenham before and he had been told to lay-off a hot lead on the local black market. Travers had seen a car arrive at the back entrance of the hotel in the middle of the night. So there's enough happening under the peaceful surface of Beachsand.

All of these undercurrents come together in a narrow inlet, which is known as The Mouth, where Major Huffe meets with, what appears to be, an unfortunate accident when the rowboat began to sink and it appeared he struck his head against the side of the sinking boat – a body was not recovered. A short time later a serious attempt is made on the life of Travers. This is not the obligatory spot of danger, but a serious and spirited attempt to silence him. A second, very obvious murder is discovered and a body washed up on a sandbank blows apart Wharton pet theory, which was modeled on the Birlstone Gambit. So there's your reason for liking Bush, JJ.

In one of my previous reviews, I have said that nobody nailed the symbiotic relationship between the fictional amateur detective and professional policeman quite like Bush, but The Case of the Haven Hotel puts Travers and Wharton on the same footing. They both act as amateur detectives who work together with the local police. As a consequence, the reader is not treated on tracking movement of suspects and destroying one, or more, cast-iron alibis, but on pure amateur detective work with information being extracted from conversations, observations and wool-gathering. Surprisingly, the professional policeman turned out to have a firmer grasp on the case than the amateur theorist. I love it when Wharton comes out on top!

However, in spite of most of the story being a lightweight mystery novel without one, or two, of Bush's trademark alibi-tricks, The Case of the Haven Hotel had a pretty solid and satisfying solution with a fairly original motive. Only thing you can really hold against it is that its not as carefully plotted as earlier titles and how some ideas were recycled from earlier novels. However, those ideas were put to excellent use here. I would even say that a key-element of the plot was better used here than in that previous story.

So, all in all, The Case of the Haven Hotel is a slightly unusual, but good, entry in the series, which comes highly recommended to readers who are already acquainted with Travers and Wharton.
Geplaatst door TomCat on 5/17/2019