Dennis Lynds was an American crime writer of many pennames, such as "Michael Collins" and "John Crowe," under which he wrote modern private-eye stories, pulp thrillers and movie novelizations, but, as a pen-for-hire, he also became a prolific contributor to The Three Investigators series – using the pseudonym "William Arden." So I always associate that penname with his juvenile detective fiction.

However, Lynds also used the Arden byline for a short, but pioneering, series of corporate espionage novels and a single short story that was listed by Robert Adey in Locked Room Murders (1991). 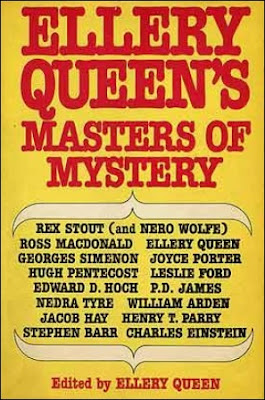 "The Bizarre Case Expert" was originally published in the June, 1970, issue of Ellery Queen's Mystery Magazine and republished in Ellery Queen's Master of Mysteries (1975). Interestingly, the brief introduction to the story asks the question "are we experiencing a renaissance of the Locked Room mystery?" At the time, more "locked-room detective stories have been submitted to EQMM in recent months" than usually come their way in years, but, happily, "the locked-room 'tec theme is now being revived" with "more ingenious plots than you would expect" – which is in line with my observation that the 1970-and 80s were the genre's Silver Age.

As an aside, Lynds produced a genuine locked room mystery during the seventies, The Mystery of the Shrinking House (1972), but a fairly minor work compared "The Bizarre Case Expert." A short story that strangely avoided being included in every anthology impossible crime anthology published since the 1980s.

The titular expert is Detective Sergeant Joseph Marx, of the Central Squad, where all of the dead-end cases filter through before they're consigned to the Unsolved File, but Detective Sergeant Marx is tasked with reviewing the so-called "circus cases." These are pretty much the unusual cases that have stumped the precincts.

"The Bizarre Case Expert" begins when a two-day old, dead-end case ends up on his desk from the Tenth Precinct on Diamond Hill. A major problem with this particular case is that not even the police knew the exact nature of the problem facing them, because it could be "a locked room or a perfect alibi or a vanished weapon," which left them in a hole – so DS Marx had to dig them out. The problem and setup of the murder is truly mystifying.

Patrolmen Sid Lewis and Ed Lincoln responded to a noise complaint at Laguna Terrace, but, when they arrive, the apartment 6-B is deadly quiet. The front door, locked and chained from the inside, had to be broken open and inside they find the body of the tenant, Sally Tower, who had been killed with multiple blows to the head. Some feet away, lay the body of her ex-husband, Paul Tower, who had received a serious blow to the head. A blow that even broke his nose and rendered Tower "instantly unconscious." However, he lived to tell the story. According to his story, a tall man with a mask had entered the apartment through the fire-escape window and attacked them. But this is patently impossible!

The fire-escape window was open, but various neighbors had it under constant observation and nobody saw a prowler going up or down the fire-escape. One of these witnesses was a invalided woman who lost sight of that part of the building for a minute. So this suggests Paul Tower is the murderer, but this is equally impossible according to the medical examiner, because he simply could not have wounded himself or had the time at his disposal to hid the murder weapon – which adds another layer to this locked room conundrum when it's found. A delightfully, maze-like and original premise with an inventive solution that succeeded in winking at both the traditional detective story and the modern police procedural.

Sadly, the lack of clueing prevented "The Bizarre Case Expert" from attaining the status of classic locked room story. Arden gave to the reader nothing to even form a rough idea of what happened in that apartment, which detracted from a great and novel ending.

In summation, "The Bizarre Case Expert" has a tantalizingly baffling premise with a pleasantly satisfying conclusion, but the plot missed an essential ingredient to make it something truly special. Nonetheless, the multi-layered impossibility and solution still makes it recommendable to dedicated readers of impossible crime stories and should be considered for inclusion in a future locked room anthology.
Geplaatst door TomCat on 5/21/2019