The Corpse with the Sunburned Face (1935) by Christopher St. John Sprigg

My last three reads can be described as a varied lot, coming from two different countries and periods, but they had one thing common: a solid idea, such as the locked room-tricks from A. Roothaert's Onrust op Raubrakken (Unrest at Raubrakken, 1935) and Robert Innes' Flatline (2018), which were stuck in middling to mediocre novel. This resulted in some mixed reviews. So I decided to return to a mystery writer who I enjoyed reading very much in 2018. 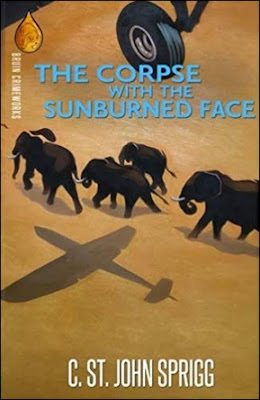 Christopher St. John Sprigg's The Corpse with the Sunburned Face (1935) is the penultimate mystery novel published during his lifetime, which was followed by the excellent Death of a Queen (1935), after which he enlisted in the International Brigade to fight in the Spanish Civil War – where he was killed in the valley of Jarama during his first day of battle on February 12th, 1937. The Six Queer Things (1937) was published posthumously.

The Corpse with the Sunburned Face cements the fact that Sprigg was not only a good writer and a proficient plotter, but also possessed a wealth of imagination.

A fascinating, splendidly realized detective story comprising of two parts that are poles apart, a satirical village mystery and a thriller set in West Africa, which together form one of those rare anthropological mysteries.

The first part of the story begins with Rev. Samuel Wykeham, vicar of Little Whippering, complaining to himself that nothing ever happened in the village. This proved to be the proverbial famous last words, because at that very moment a small boy shot down a hill accompanied by "screams of terror." William Bundling had a close encounter with "The Invisible Man" who had threatened the boy to slit his belly open, if he ever caught him sneaking around the house.

Sam O'Leary is the mysterious person, known locally as The Invisible Man, who arrived in the village with "his face hidden behind a scarf" and "nobody's seen him by daylight." A recluse has taken possession of the Wilderness, "an eyesore of a cottage," where only tradesman are allowed and groceries enter the home through a little flap in the front door – everyone else can expect to be insulted at gunpoint. Reverend Samuel decides to pay his new parishioner a visit, but is greeted with a barrel of a gun and gets twenty seconds to vacate the premise or he'll blast his goddamned head off ("devil-dodger or no devil-dodger"). Police Constable Collop is treated with a little bit more respect, but O'Leary still calls him a bastard and a "blasted bluebottle."

This last confrontation ends with O'Leary warning Collop that, if anyone else dares to disturb him, they can expect "a charge of buckshot in their gizzards to help them on their way."

So this is grist on the rumor mill of Little Whippering. Some believe O'Leary is a murderer in hiding, while others think he's a leper or a gold hoarder, but, despite the legend growing around him, the isolated miser became a part of the fabric of the little, old-world village. Several years later, a bearded man, George Crumbles, descended upon the village looking for O'Leary, but Crumbles is found a short time later dangling from a rope in his hotel room and the police demands O'Leary discards his disguise – revealing to them an inexplicable sunburned face and an exciting back-story that took place in West Africa. A story about an expedition to steal the treasure of the African Kingdom of Balooma and betrayal among the perpetrators, which is why O'Leary had buried himself in a small English village. 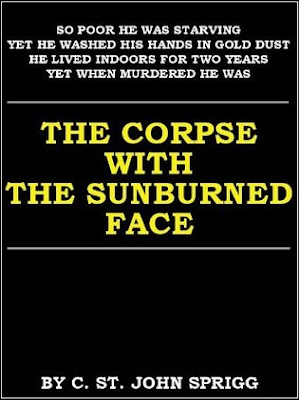 Obviously, this part of the story was inspired by Sir Arthur Conan Doyle's The Sign of Four (1890) and The Valley of Fear (1914).

However, if you think this is merely another play on the shopworn Birlstone Gambit, you're dead wrong. Sprigg played a dazzling game of three-card monte, but replaced the cards with "an amazing confusion" of identities and clues. Like I said, Sprigg was a proficient plotter.

One more thing I should mention is that the first half of the story is an amusing, satirical look at English village life centering around the vicarage. Reverend Samuel is expecting two guests, Mr. Neptune Jones, who is to become a permanent boarding guest at the vicarage, but Jones turns out to be a black man from West Africa. Very much to the shock of Mrs. Wykeham. The second guest is Dr. Ridge, an American anthropologist, but this person also defies Rev. Samuel's expectations and these two characters show Sprigg had been deeply immersed in Marxism at the time. Neptune Jones and Dr. Ridge obviously were meant as subversive, outside elements in the old, conservative-minded village. However, I appreciate he had a sense of humor about it.

For example, Dr. Ridge has come to Little Whippering to obtain records of the customs of European villages, "which are rapidly dying out," before it's too late and makes observations about their May-Day fertility rites and vegetation God (Jack-of-May) – noting "a certain resemblance to the social tenets of the Wahina tribe." Some of these characters will turn up again in the second half.

The second half begins when a gruesome, ritual murder is committed at the Wilderness and Inspector Archibald Campbell decides to go Africa to unearth the truth behind these deaths. The opening of the second part is basically an overview of the previous half, which untangles the mess of identities and gives a solution to the murders, but there's not much else what I can say without giving anything away. Suffice to say, Campbell runs into a spot of trouble and one of the last chapters has a well-imagined scene of a sacred and secret ritual. This links The Corpse with the Sunburned Face to the detective fiction of such Australian mystery writers like S.H. Courtier and Arthur W. Upfield.

All in all, The Corpse with the Sunburned Face is a rich, colorful and well-written detective story that has both its darker and lighter moments, but, more importantly, it has a cleverly constructed, slightly unorthodox plot. The result is one of Sprigg's more memorable detective novels.
Geplaatst door TomCat on 5/07/2019