Last year, I finally got around to reading a detective novel by J.J. Connington, namely Murder in the Maze (1927), who was one of the mystery novelist that was smeared as a humdrum writer and dismissed as a relic of the genre's past – a label that was also pasted on Freeman Wills Crofts and John Rhode. However, the test of time is slowly exculpating their reputation and legacy as they're finding their way back into print. Readers can now judge their stories without emptying their bank account to acquire an overpriced, second-hand copy. 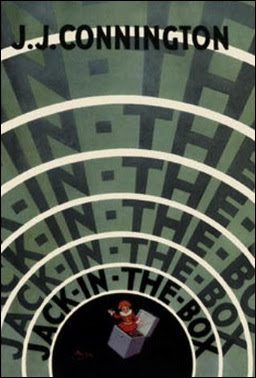 Connington is one of the luckier humdrum writers whose work has been mostly reissued by now as either paperback editions or ebooks, which is why I recently decided to stock-up on his Sir Clinton Driffield series. And a couple of non-series titles. Connington still represents one of the biggest holes in my reading of the classic detective story. I think I have read more detective stories by obscure, long-forgotten writers than of the household names of the era and that's just being impious.

So I plucked Jack-in-the-Box (1944) from this freshly accumulated pile and have to say, as far as mysteries with a World War II background goes, this proved to be memorable example with depictions of the bombing raids by the Luftwaffe – which is used here to camouflage a murder victim as a casualty of war. An idea that only Rhode seems to have played around with in The Fourth Bomb (1942).

Jack-in-the-Box was published in 1944, but the story takes place in 1942 and begins when Sir Clinton Driffield and Squire Wendover are driving through the village of Ambledown and observe the wreckage left behind by the last swarm of Nazi bombers.

Ambledown took "a bit of a knock" in an attempt to destroy a nearby magneto factory, which left forty-three dead and quite some property damage, but the bombers missed their target. So everyone expects them to return and they come back early on in the novel. Connington also touches upon the effect the war has on the day to day lives of ordinary people, rationing, housing shortages and blackouts, which forced the people "to be content with the essentials" and "do without the frills" – one of the reasons why so many traditional mysteries from this period tend to be bleaker than those from previous decades. However, the initial reason Sir Clinton and Wendover drove to Ambledown is not related to the war.

A local archaeologist has unearthed a long-lost treasure trove at a digging site locally referred to as Caesar's Camp.

The place is an old Roman camp, on a tract of wasteland to the west of the village, but the spot probably has as much a connection with Caesar as "the Menai Bridge or Buckingham Palace." There was, however, a legend attached to the Roman camp about a cursed treasure promising death to the unlucky finder. Robert Deverell, President of the Natural History Society of Ambledown, brought "a collection of vessels and utensils" to light when digging for Roman-era coins. All of the objects were of gold and beaten and twisted out of shape, which made the collection easier to transport for the ancient looters who had buried their plunder there so many moons ago. A plunder that obviously came from an abbey.

This treasure belongs to the crown, but Deverell is granted permission to inspect and catalog the treasure, piece by piece, at his own home. But than the Luftwaffe pays a second visit to Ambledown and Deverell is killed by enemy action. Or so it looks like.

Apparently, an incendiary bomb had crashed through the skylight, hitting Deverell on the head, and setting fire to the house. An unlikely way to die, one in a million, but suspicion is aroused when pieces of the treasure turn out to have been taken from the scene – which included a battered crosier. Complications begin to pileup when the village is hit by an outbreak of inexplicable deaths. There are no less than five murders that have to be disentangled by Inspector Camlet, Squire Wendover and Sir Clinton (who's the Chief Constable). And, as if that wasn't enough, there's a super-normal plot-thread that places Jack-in-the-Box on the borders of the impossible crime sub-genre. 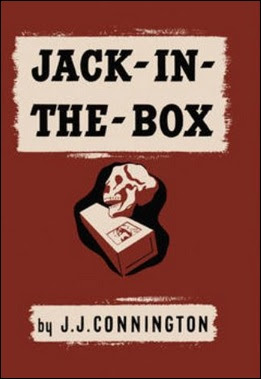 I decided to tag this post with the "locked room mysteries" and "impossible crimes" toe-tags, but this is really a borderline case rather than a full-blown impossible crime novel.

Jehudi Ashmun is a mulatto from Liberia and stands at the center of a group, in the village, who are interested in the occult and a technique, which had been lost in the mists of time, called New Force. Ashmun made an ordinary card-table talk and a loudspeaker was disregarded as a possible answer, because you can't hide a loudspeaker in "one of these slim-jim folding affairs" with "a top hardly thicker than plywood" – especially in the 1940s. The ancient powers of New Force is demonstrated by fiddling on a violin and this killed several animals.

Ashum killed an aquarium of minnows, but electricity was eliminated as the invisible killer. After this demonstration, a warren of dead rabbits were found outside. None of the rabbits had a mark on their body or even as much as a minute trace of poison in their system.

On a side note, Nick Fuller, of The Grandest Game in the World, pointed out in his review that similar figures appear in Carter Dickson's The Reader is Warned (1939) and Anthony Boucher's Nine Times Nine (1940). Interestingly, the character in The Reader is Warned claims to possess a power, called Teleforce, which can be used to kill people from a distance without leaving a mark on their body. Something very similar to Ashum's New Force.

So with stolen treasures, a murder epidemic and super-normal forces abound you need a logical, cool-headed detective to tackle these problems and Sir Clinton is more than up for the task. Sir Clinton pleasantly reviews all of the events and weighs the evidence against all of the possibilities, but doesn't neglect his duties to play the role of Great Detective and teases his friend with his knowledge of the truth. However, Wendover proved to be pretty useful Captain Hastings. He may not have grasped the solution, but his knowledge of local history and family relations helped frame the clutter of events, more specifically the murders, in a tight frame that will help readers who like a shot at beating the detective to the finish line.

Sadly, Connington inexplicably slipped in the final leg of the story when Jack-in-the-Box shifted from a tale of ratiocination into a thrilling shilling shocker with a sadistic murderer drugging and torturing a man, while trying to force another character to sign a piece of paper – a shift that happened from one chapter to the other. And it struck a decidedly false note. Despite this weird, pulpy revelation of the murderer, the plot was excellent and particularly the science behind the murders and borderline impossible events. I especially liked the explanation for the murder of the local drunk, who died of carbon-monoxide poisoning, which turned out to have an ingenious explanation that was tied to one of the bombing raids. Connington should have saved that method for another book instead of burying it in a series of murders.

Anyway, these science-based murders demonstrate that Connington was unquestionable a member of the Humdrum School of Detection.

So, on a whole, Jack-in-the-Box was an excellent mystery novel with a fascinating series of crimes, a well-drawn background and solid detective work, but the revelation of the murderer struck a false note in the story. It's a smudge on the plot, but not one that should deter you from enjoying a mostly well-written, cleverly plotted detective novel.
Geplaatst door TomCat on 3/13/2018