John Russell Fearn's Within That Room! (1946) is a novelette originally published in the Toronto Star Weekly and is an expansion of a short story, "Chamber of Centuries," which appeared in a 1940 issue of Thrilling Mystery and was reprinted in a modern anthology – titled More Whodunits: The Second Borgo Press Book of Crime and Mystery Stories (2011). I was not entirely sure what to expect from this story, as it concerns mental assaults, evil influences and demonic manifestations in a haunted room, but the plot turned out to be just fine. Somewhat reminiscent of the better, earlier episodes of Jonathan Creek with a nod to a well-known Sherlock Holmes story.

One of the two protagonists of Within That Room! is a young woman, Vera Grantham, who had emerged from the A.T.S. (Auxiliary Territorial Service) full of hopes and plans. During the war, Vera had courageously "defied shells and bombs," but the post-war world had so far defeated her. She had dreams of becoming a commercial artist, but she's buried in debt and then, to make things worse, her landlady announces an unexpected visitor, Mr. Jonathan Thwaite – a solicitor from Manchester. Vera is afraid that Thwaite has come to see her on account of the pile of unpaid bills and bolts before he can serve her with a summons.

However, Thwaite eventually catches up with Vera and informs her that her eccentric uncle, Cyrus Merriforth, has passed away and left her an unusual inheritance.

Cyrus Merriforth was "a very famous entomologist and botanist," who had read of Vera's "gallantry in the A.T.S." during the war, which prompted him to add a codicil to his will leaving her a hundred pounds and his home, Sunny Acres, but the place is more than a mere residence. Sunny Acres was once a feudal castle and has a room in it haunted by "an emissary of the devil." The legend is well-known in the area and not a single person from the nearby village of Waylock Dean dares to go near the place. Vera experiences this first-hand when she decides to inspect her inheritance.

She's unable to find anyone in the village willing to drive her all the way to Sunny Acres and has to make the journey by foot, but, along the way, she's offered a ride from a young man, Dick Wilmott, a former R.A.F. guy – who currently runs a radio repair shop in Godalming. After spending the night at Sunny Acres, Vera calls Dick back to the place to help her figure out what's going on behind its walls.

The former servants, Mr. and Mrs. Falworth, are still present and Mrs. Falworth tries to convince her to never open "the horror-room," which has a door sealed shut with heavy screws. This is the room haunted by an evil entity, a member of the devil's retinue, who's "only visible once a year." But even when the room is empty, there's an overwhelming sense of evil that will blast your senses and reason. Something that has happened to her uncle. Cyrus had entered the room to lay the ghost and had emerged from the room on "the borderline of insanity," which may have landed him in an early grave.

A demon-haunted room that can rob you of your sanity recalls Paul Halter's La chambre du fou (The Madman's Room, 1990), but with a slight hint of John Dickson Carr's atmospheric radio-play, "The Devil's Saint," which can be read in The Dead Sleep Lightly (1983). Or listen to it here.

However, a haunted room is not the only unsettling part of Sunny Acres. During her first night, Vera is roused by strange sounds and she did what so many heroines do in these kind of detective stories: get out of bed and investigate, which brought her to a locked door at the bottom of the basement stairs – where she hears clanking and swishing sounds. Not to mention the awful smell that is coming from behind the locked door. When she lays down on the floor, to look through the crack under the door, she sees the feet of a man and a woman moving about. Presumably of the two shifty servants. 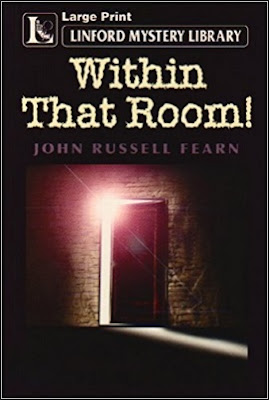 I have to point out here that the story is not a traditional, Golden Age whodunit, but has a plot that moves along the lines of a Conan Doyle story with a couple of impossible crimes thrown in for good measure. Anyway...


Vera decides to ask Dick to help her figure out what's going on and installs him in the house as her fiance. So there you have your romantic sub-plot and Fearn's take on the snooping, bantering mystery solving couples of Kelley Roos, Frances Crane, Delano Ames and the Lockridges.

Dick and Vera discover that a floor-plan of the castle and a map of the district had been torn from a book in the library, The History of Sunny Acres, which makes them suspect that Uncle Cyrus had been cleverly murdered, but they also have a face-to-face encounter with the entity haunting the place – beginning with them getting mentally assaulted when they enter the room for the first time. They enter the room a second time, on the day the ghost is reputedly visible, which is when they see the following:


"A strange, incredible caricature of a being hung in the dusty air, a haze of blurry light surrounding it from the back. There was the pointed tail, the simian ears, the long, needle-chinned face, bent arms flexed as though to pounce forward. He seemed to be grinning horribly. Yet he was in mid-air, and through him the ancient stone wall could be distinctly seen."

As a devout devotee of the impossible crime story, I appreciate these scenes, depicting the apparent disintegration of the fabric of reality, as much as a clever and original locked room trick. And if I have any complaints, it's how easy it was to figure out the ghost-trick. Not only did I figure out how the ghost "materialized into a locked room with solid walls, floor, and ceiling," but I did so based solely on the plot-description of the story. I actually emailed Philip Harbottle to tell him I was going to review Within That Room! and asked him how close my solution was to Fearn's explanation for the apparition, which he answered "you really are a perceptive and ingenious fellow."


Well, it's hard to deny the perceptive and ingenious part, but I have to admit that it helped that I have become somewhat familiar with Fearn's plotting technique. And who he was as a person. This ghost-trick has his personality written all over it and wish I could point it all out, but that would thoroughly spoil the solution.

So, all in all, Within That Room! is perhaps not the best detective story ever written in this sub-category of the locked room genre, namely haunted rooms that kill or do harm, but it's an amusing read harking back to the days of Doyle's Sherlock Holmes and tremendously enjoyed reading it – demonstrating once again why Fearn is my favorite second-string mystery writer. I'll be taking a look at the short story that served as the bare-bones for this novelette, "Chamber of Centuries," along with two other little-known locked room short stories. So stay tuned.