There's Evil Under the Sun

"Look! That's France you can see over there, twenty minutes away by boat, an I'm as lost as if I were in the heart of Africa or South America."
- Inspector Maigret (My Friend Maigret, 1949).

Last Tuesday, fellow mystery enthusiast and scholar Curt Evans, who's still tramping past the musty covers and brittle pages of detective stories that were abandoned a long time ago to accumulate dust particles, pulled out a novel that not only looked pretty good for its age but also had managed to clung to the public's collective memory. "The Passing Tramp" had hitched a ride with Georges Simenon to review Un Crime en Holland (Maigret in Holland, 1931), which infused me with pure, undiluted nostalgia as I always associate Georges Simenon with the late Appie Baantjer – whose politieromans ignited my love for the detective story. 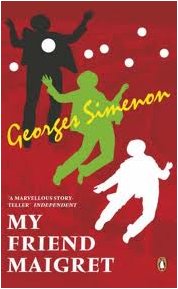 As might be expected, from a chronophobiac on a nostalgia rush, I wanted to read one of their novels next, but picking between both men and deciding on a specific title proved to be more difficult than it should've been. I was initially inclined to go with Appie Baantjer's De broeders van de zachte dood (The Brothers of a Merciful Death, 1979), but decided to make an offensive gesture at that mocking demon in the clock and went with Georges Simenon's Mon ami Maigret (My Friend Maigret, 1949).

The scenery of Mon ami Maigret moves from the rain swept streets of Paris to the perfidious tranquility of a Mediterranean island, Porquerolles, where a two-bit criminal was brutally murdered after he boasted in a crowded bar about his friendship with a policeman named Maigret. He can even show a signed letter as proof. Maigret is dispatched by train and ferry to delve into the matter, but even though the island is as rich in suspicious character as in sunshine, from a wealthy old English lady with her much younger French secretary to a Painter from Holland with anarchistic tendencies and his Belgium mistress, nobody of them seems to be equipped with a motive good enough to empty a gun on a bragging crook. 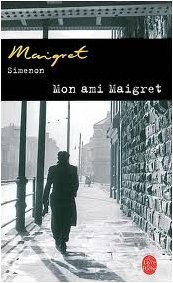 But Maigret also has another matter that plagues him like a Big Brother: The presence of Mr. Pyke who follows him around like a discreet shadow. Mr. Pyke is an inspector from Scotland Yard and was invited to study Maigret while he's working on a case – and this worries the inspector to no end. Maigret is very pre-occupied what a colleague from such a prestige's institute might think of their simple methods, like roughing up a suspect to loosen up their tongues, difference in cuisine, clothes (etc.) and the inevitable discovery that there's no order or method to how handles a murder case.

At one point in the story, the reader becomes privy of Maigret's thoughts and how he would've preferred to roam the island and soak up the atmosphere as oppose to interviewing people in order to keep up an appearance of professionalism to Mr. Pyke. Unfortunately, the opportunity to pit Maigret's intuitive method against the sound police work of a Scotland Yard tech was left unexploited.

All in all, Mon ami Maigret was a nice, quiet read for the most part, but the pace became so slow that I began to loose interest and the only encouragement for going on was that I was only two chapters removed from the back cover. Don't get me wrong, it's not a bad story but very little happens and that goes on for far too long. And unlike the book Curt Evans reviewed, this was not a pure detective story. The case got solved by a few very late discoveries, but then again, I knew beforehand that Simenons was, for the most part anyway, not that kind of writer, however, the solution and motive were interesting – especially the motive, which was later reused and improved upon in one of Baantjer's best efforts at penning a genuine whodunit.

So even though this was not a thoroughly bad book, au contraire, I do think I prefer Appie Baantjer over Georges Simenon any day.

After thought: the French cover gives off the impression that the book takes place on the dirty backstreets instead of a sun soaked island.
Geplaatst door TomCat on 4/22/2012