The Death of a Newshound

“If you watch the news and don't like it, then this is your counter program to the news.”
- Jon Stewart.

Last week, I came across a small market and took a brief detour to roam pass its stands, and before long, I was perusing the contents of a stall crammed with boxes that were stuffed with old secondhand books. I began to dig through the boxes, but only found skepticism mocking the hope I had of stumbling upon a serendipitous discovery and was ready to give up when I noticed that the last boxes were brimming with English-language pockets – and moments later I walked away with Herbert Adams' The Writing on the Wall (1946) and Josephine Tey's The Singing Sands (1952). A buck each! O frabjous day!
I was quite content with my purchases, two paperback editions of vintage detective stories in excellent condition for a mere pittance, but it got better when Mike Blake, a fellow member of the GADetection Group, congratulated me on finding this edition of The Writing on the Wall, as it's a pretty rare one, which isn't even offered up for sale on the internet – and hardcover editions range from about $25 to $70. Of course, this made it unthinkable to let this book languish on my to-be-read pile and even put a little-known, but promising, locked room mystery back on the shelves to take a closer look at this collector's item. 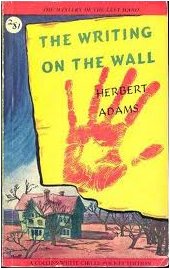 The Writing on the Wall has a premise that appears to confirm the stereotypical image a lot of contemporary readers have of British detective stories from the first half of the previous century: a newspaper mogul, Sir James Norland, invites the editors of his newspapers to his country home, The Brambles, to discuss how their periodicals can influence the shaping of a Brave New World after the last devastating war. The exchange of ideas between the newspapermen, on how this world will take shape, is one of the highlights of this book and some of their sentiments still ring through today. If you are interested in history, this portion alone makes it worth tracking down a copy.
It's not just business talk, at least, not every conversation centers on the newspaper industry as the magnate has also invited Lady Diana and her mother, Lady Mellowfont – an impoverished marchioness. Sir James has found a loophole that could resurrect their dried-up bloodline of nobles and in exchange he wants Lady Diana to marry his son, Peter, and produce a son, his grandson, who will be a marquis. Unfortunately, for Sir James and Lady Mellowfont, their children have given their hearts to someone else and Peter manages to upset his father when he turns up with his love, a dancer named Ambrosine, but the reason for being upset, according to Sir James, is that Ambrosine is his illegitimate daughter and thus his half-sister.
Well, if that does not set the stage for an old-fashioned homicide I don't know what will and the murderer does not let the reader down: the crumpled remains of Sir James are found the next morning at the bottom of the stairs, but it was not a fall that killed him but a whack over the head and not with the proverbial blunt instrument. I want to toot my own horn here for identifying the unusual murder weapon as soon as the doctor gave a description of the wound and couldn't believe how on the stop my observation was when the item was mentioned a few chapters later in a descriptive passage. Anyway, the home was also burgled, the butler drugged and Peter Norland was nowhere to be found on the premises. Enter Inspector Farnell, who does a swift and competent job in clearing up the burglary, based on a cupboard with a key on the inside of the door and a floor littered with biscuit crumbs, but the murderer of Sir James Norland remains as elusive as ever until Roger Bennion arrives on the scene.
Major Roger Bennion brings more answers than questions with him and makes a few astute deductions when examining that fateful collection of stairs, but this has one drawback that always annoyed me: it made the police appear as incompetent idiots, which is the last thing you could accuse them of in this book. But that's how it came across. Inspector Farnell may have done his part and nipped the burglars in the bud, but they weren't even half as sharp as their own tools and when Bennion crossed the thresh hold to wrap up the case with only a quarter of the book left to go, well, that simply does not reflect well on the good inspector. However, the only real complaint, plot-wise, is that Bennion resorted to a bluff to draw out the murderer. It was a clever and logical bluff, but I prefer to watch the detective trap a killer in what I have seen referred to as “A Prison of Logic.”
Anyway, that's a minor quibble in what was an intelligently written, if at times ordinary, detective story with a clever, but ultimately, simple plot, subtly placed clues and more than one eager attempt at confusing the reader by dangling a red herring in front of them – which made for a rewarding and satisfying read. From logically explaining how it came that a bunch of thieves and a murderer marked the same house on the same night for their nefarious activities to the effective motive that was fitting for their Brave New World. Granded, The Writing on the Wall may not be a classic of the genre, but anyone giving it less than four stars has no regard for antiquated craftsmanship.

John Norris from Pretty Sinister Books reviewed two of his books earlier this year: The Secret of Bogey House (1924) and The Crime in the Dutch Garden (1931). Herbert Adams seems to have been a very competent and prolific mystery writer and I want to read more of him!
Geplaatst door TomCat on 4/15/2012