"I would not tell them too much," said Holmes. "Women are never to be entirely trusted,--not the best of them."
- Sherlock Holmes (The Sign of Four, 1890)

Normally, when opening a Nero Wolfe and Archie Goodwin novel or novelette, I am greeted by the familiar clatter of a verbal sparring match emerging from the office and imaginary flavors of Fritz's latest culinary masterpiece drifting from the kitchen that makes that famous brownstone, on West 35th Street, one of those fictitious places I would like to find a Never-Ending Story-like entrance to. But this time I was met on the doorstep by a chill that ran through the house to answer the door. 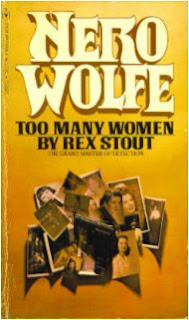 Rex Stout's Too Many Women (1947) begins with a confession from Archie that he had more of Wolfe than was good for either of them and reopens a line of communication with a client who was brushed aside by the lack of subtlety from the brains of their snooping outfit. Mr. Jasper Pine is the president of Naylor-Kerr, Inc. (an engineering supply company) and wants Wolfe, under an assumed name, to take a job in the stock department to look if there's any validity in the rumor that one of his employees, Waldo Moore, was accidentally or intentionally run down with a car.
It's out of the question that Wolfe will expose himself to any fieldwork, but Archie is more than up for the job and finds a newfound appreciation for his work as he fishes in the secretary pool of Naylor-Kerr for information and clues. I think watching Archie interact with the women of the work floor, even trading blows with the estranged husband of one of them in the street in front of the brownstone, made up for the story's lack of pace.
The first quarter of the book is very, very slow moving and Archie even admits this himself. Waldo Moore's death is officially written-off as an unsolved and unintentionally hit-and-run and with a trail that has gone cold months before they were pulled into the case lowered their changes considerably of pulling a quick one – especially if you have to sift through offices jam packed with potential suspects and witnesses. This took the urgency completely out of the book and it never made any serious attempts at a comeback.
I thought the plot was finally brought into motion after the murderer ran over Kerr Naylor, son of one of the company's founders and named after the other, but the case jams again after Wolfe's best operatives come up empty handed and the only thing the police was able to establish is that their lab guys confirmed the suspicion of murder. Moore and Naylor were either stunned or killed before being moved to the scene of the crime and ran over with a car (hence the botched attempt at a clever and witty pun in the post title). Wolfe finally deigns it worthy to take action, after having done next to nothing for the entire book, and leads everyone to a very unsatisfactory conclusion.
However, I was not disappointed at all. I knew before tackling the book that it was not going to be one of his greatest achievements and as I have said many times before, this is one of the few detective series I read for their characters rather than their plots. Good plots are an extra with Rex Stout, but not a necessity and this book had more than enough to offer as far as the characters are concerned. It was also nice to see Archie as the main protagonist and the only complaint I have is that Stout didn't go all the way and let him solve this case, if only just for once.
Anyway, plot-wise, Too Many Women is far below average with its lack of clues and fair play, but I very much doubt that will deter any dedicated Rex Stout fan from enjoying it.
I also reviewed:
Where There's a Will (1940)
And Four to Go (1958)
And tried answering that age-old question: why do Nero Wolfe and Archie Goodwin never age in the stories.
Geplaatst door TomCat on 4/13/2012