The 79th volume of Gosho Aoyama's Case Closed, published outside of the English-speaking world as Detective Conan, has some big shoes to fill coming right after the ambitious, multi-layered and massive "Mystery Train" story from vol. 78 combining a classically-styled, railroad detective story with a character-driven thriller – cleverly putting the series' cast of recurring characters to good use. In the last chapter of that volume the groundwork was laid for another Kaitou KID heist of the impossible variety! 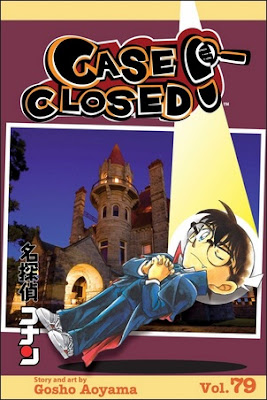 Jirokichi Sebastian is one of my favorite recurring characters, a wealthy, semi-retired CEO of a financial company and adventurer, who has become embroiled in a very public rivalry with the modern-day Arsène Lupin. So now he uses his personal fortune to purchase rare artifacts, gems and elaborate traps to lure and ultimately capture Kaitou KID, which makes him the perfect antagonist for that playful antihero. It's like Wile E. Coyote chasing the Road Runner, but the traps are baited with precious gems and KID escaping from them usually present an impossible situation.

As stated in the previous volume, Jirokichi "never misses a chance to exhibit a gem that might attract the Kaitou KID" and his latest acquisition is a pendant with a red diamond, the Blushing Diamond, which is fastened to the shell of a turtle – named Poseidon. Jirokichi went through great lengths to protect both the turtle and the diamond that's attached to its shell. The aquarium at the exhibit is constructed out of shatter-proof glass and impenetrable wire netting on the top and sides, but the Moonlight Magician kept his word and made the diamond disappear as if by magic. Leaving behind a sealed, but empty, aquarium and a note saying, "the shy mermaid has dissolved into foam in my hand."

These Kaitou KID heists tend to be visual spectacles that handily exploit the comic book format to get away with tricks that would be hard to pull off in prose. Such as his miraculous mid-air walk (vol. 44) or his astonishing transportation-trick (vol. 61), which still succeeded in not being wholly implausible. By comparison, the theft of the turtle and diamond felt very contrived and unconvincing. However, the impossible crime turned out to play second fiddle to the solution revealing a cleverly done inversion of the Jirokichi vs. KID story format. So my impression is that the impossible theft was plotted around that inversion, but it undoubtedly improved an otherwise average KID story with his mistake being the proverbial cherry on top. I liked that there was a large crowd of Kaitou KID fans in front of the exhibition erupting in celebration to the news that "THE KID GOT THE GEM!!"

Speaking of playing second fiddle, the third, vampire-themed story is the headline act of this volume, but the second story, "The Unlocked Locked-Room Murder," should be considered a landmark of the contemporary-traditional detective story. A story that broke new ground with a rough, unpolished idea demonstrating the 21st century has fresh opportunities, not obstacles, to offer to every mystery writers who knows how to plot.

This original piece of detective fiction begins conventionally enough with Harley and Kazuha accompanying Inspector Torotaki, of the Osaka Police, to Tokyo to help investigate a suspicious death, but before picking up Conan at Richard Moore's office – because Harley suspects Conan might be interested in the "outta-reach locked-room murder." A schoolteacher, Hidemichi Mizuki, came to the attention of the police and they place his Tokyo condo under observation, but, on the third day, he failed to come outside for his daily walk. So they decided to enter the house and found his body hanging from a rope in the living room, but the gap between the dangling feet and seat of the chair suggests it could have been murder. But "how could the killer get in and out without being spotted by the cops?" 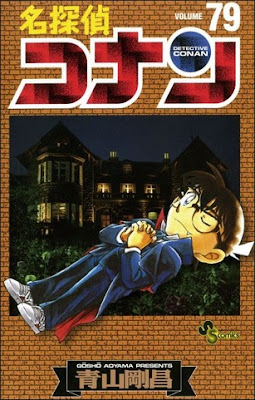 Harley, Kazuha, Torotaki, Richard, Rachel and Conan (yes, the whole group) travel to the condo to hunt for clues, but Harley becomes disappointed when evidence clearly points towards suicide. So a potentially interesting and tough case was cruelly snatched away from under his nose, but then something unexpectedly happens. When the elevator comes up to their floor, a man is standing inside with a gun trained to his temple and he pulls the trigger in front of their eyes. The doors close again and briefly goes up before coming down again. The doors open to reveal the body of the man lying inside and the word "GOODBYE" scrawled on the inside doors. Whatever trick you think was used, you're wrong. This is not the kind of detective story you can solve by relying solely on your knowledge of detective stories. Aoyama came up with something completely new that can only be described as some straight up reality manipulation. More can be done with this idea, but the execution of it needs a little more fine-tuning and polish.

So this brings us to that previously mentioned headline act that covers the last seven chapters and will be concluded in the next volume, but it better be good, because have been impressed with the story thus far. Conan, Rachel, Harley and Torotaki tag along with Inspector Torotaki to an old-fashioned manor house in the manor. Six months ago, the body of the maid was found in the surrounding forest, "strung upside down from a stake," whose only injury was "a pair of small punctures in her neck" and locals suspected the owner of the manor, Hakuya Torakura – who turned out to have a rock-solid alibi. But lately, he also adopted all the characteristics of a vampire. He sleeps during the day in a coffin, threw out the priceless family silver and told the cook never to use garlic ever again. Inspector Torotaki is asked to look into this case again as favor to his chief (Harley's father).

Upon their arrival at the manor, they find a family of rivaling siblings and their partners who all have their eyes on inheriting the family fortune. It doesn't take very long before all hell breaks loose. Hakuya Torakura is found dead in his coffin with a stake driven through his heart, but the body inexplicably vanishes as if he turned into mist and disappeared. Just like a vampire. Torakura's figure reappears, "filmy and pale like a ghost," during a group photograph, but only Rachel and Kazuha spotted him. Until the photograph is developed. This is the last time his ghostly presence is both seen and felt. Not to mention several (impossible) murders and getting cut-off from the outside world.

Regrettably, the solution to the vanishing body and spirit photograph exposed some very cheap, second-rate tricks unworthy of this great series and already have a pretty good idea who's behind the murders. But that will be revealed in the next volume with a very late, as of yet unexplained impossibility might rescue the story from ending up being uncharactertically poor entry in the series. Fingers crossed!

So, on a whole, this volume distinguishes itself by toying with some fun and even groundbreaking ideas with only the execution of those ideas leaving something to be desired. The third story had potential, but has so far only disappointed me. That unfortunately makes for a very uneven volume. Particularly coming right after the volume that contained a series-classic. Still not a bad volume, all things considered, but that vampire murder case really dragged down the overall quality.