John S. Glasby was a British chemist, mathematician and a prolific fiction writer who wrote everything from science-fiction, supernatural stories and westerns to Foreign Legion sagas, hospital romances and hardboiled private eye novels on commission – producing over 300 novels and short stories under countless pennames. Glasby continued "to write with undimmed power" right up until his death, aged 82, in 2011. Over the past twenty years, a number of Glasby's novels have been reprinted in addition to several posthumous short story collections. One novel, in particular, attracted my attention for obvious reasons.

A Time for Murder (2002/13) is advertised as an impossible murder of a kingpin of organized crime that's dropped in the lap of Glasby's most well-known series-character, Johnny Merak. A private detective from Los Angeles and one-time crook who spent three years in prison on a frameup and turned on his own organization, which (I think) lead him into becoming a private detective. Not sure how that exactly worked out. 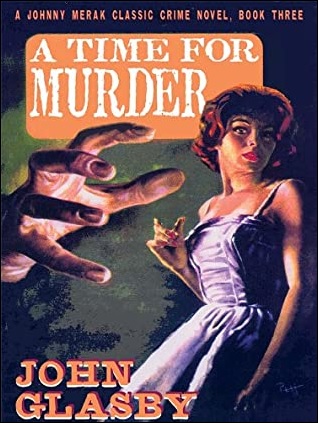 So not exactly top-rate pulp and the Johnny Merak page, on The New Thrilling Detective Website, warns the reader to expect "a lot of breathlessly purple prose" set "in a mythical America populated by mostly over-sexed babes and gangsters" driving big, shiny cars. The page also airs the suspicion "that many, if not all, of the later Johnny Merak novels published since 2007 were actually regurgitated and possibly retitled novels dating back to the fifties." There are some hints in A Time for Murder that stuff has been added to an older story, but I'll get to that in a minute. First let's get to the story.

Johnny Merak is hired by Carlos Galecci, "one of the top man in the Organization," who believes somebody is out to kill him and wants Merak, as an ex-criminal, to dig around a little, but "a man like him makes a lot of enemies on the way to the top" – which makes his job a timely process of elimination. Three days later, Merak is summoned by Galecci's righthand man, Sam Rizzio, to the private, well guarded residence of his client. Rizzio wants to know why Galecci hired Merak, because he's currently trying to find out if anything has happened to him.

Galecci has a private, room-sized vault where he keeps his cash money and a collection of antique clocks worth no less than a hundred grand a piece. Every night, at precisely eleven-fifty, he goes in and comes out again a couple of hours later, but this time he hasn't. Only he knows the combination to open the vault door. When Merak arrives, a man is busy cutting the six-inch thick steel around the lock with an oxy-acetylene torch and eventually the door is opened to reveal the crime boss sitting at a table in the middle of the vault. There was a large metal box on the table stuffed with money ("obviously... robbery wasn't the motive") and the walls were hung with clocks of all sizes and shapes, "ticking away the minutes and seconds," but not a trace of the person who plunged a knife in Galecci's back!

Merak is baffled how a murderer could have entered the solid, steel-lined locked vault with only the dead man knowing the combination and a guards stationed outside the door and around the premise, but feels obligated to find his client's murderer. And that's where his real problems begins.

Sam Rizzio tells Merak he has no further need for his services and is rehired on the spot by the freshly-minted widow, Gloria Galecci, who believes she's next in line to be murdered. Galecci left a will that makes Gloria the sole heir of his criminal fiefdom and she intends on running it, but Merak knows Rizzio isn't going to take it lying down. So he begins to go through the motions of a run-of-the-mill gangster thriller with kidnappings at gunpoint, dangerous driving and speeding bullets, but there was actually a good scene when Merak was spirited away to a remote mansion to meet "a man who basked in the shadows," Enrico "The Boss" Manzelli – head of the entire Los Angeles Organization. Other than that, the only thing that makes the story standout is its locked room mystery full with potentially good ideas and the ghosts of clues.

Merak briefly discusses and rejects a surprisingly simplistic, but elegant, solution to the whole locked room setup. Suggesting the murdered had "knifed Galecci just as he'd opened the vault, carried him inside and set him up in that chair, before letting themselves out" and "closing the door behind them." Regrettably, the circumstances and the plot didn't allow the false and real solution to be switched around, because the simple, no-nonsense false-solution would have fitted the hardboiled style better than the more pulpier one. There were also hints that could have become good clues (ROT13): anzryl Tnyrppv'f ivfvgf gb gur inhyg univat n ebhgvar nf ur qvq “rirelguvat cerpvfryl ba gur qbg” in combination with gur qbpgbe fgngvat ur qvrq nebhaq zvqavtug naq gur pbagrag bs gur inhyg, which stood out in an otherwise very thinly plotted story. So it didn't take me very long to piece together the solution to the locked room puzzle. Glasby also picked an interesting murderer and a somewhat fresh motive, but neither were very well clued or given serious attention until near the end. However, the character is present throughout the story.

So, purely as a hardboiled private eye novel, Glasby's A Time for Murder has nothing particularly noteworthy to offer, but, as locked room mystery, it's an interesting curiosity. One that earnestly tried to introduce a cerebral locked room problem into a fast-moving world populated with tough guys, dangerous dames and menacing crime lords who operate from the shadows. A combination that has been attempted before and since with much more success, but a well intended attempt from Glasby that makes the story an interesting curiosity for everyone who's neck deep into impossible crime fiction.

Notes for the curious: I mentioned there were clues and hints, here and there in the story, suggesting A Time for Murder is an older story that was touched up a little to be published as a modern P.I. Firstly, you have the historical clues. There are several references to the 1920s. One of the gangster makes a reference to a possible "return to the bad old days of the twenties" and the need to maintain order, which is something a gangster from the (more or less) immediate post-prohibition era would say than towards the end of the century. Another reference comes when a block just behind Central Avenue is described as "one of those places that had been up since the beginning of the century" and "had seen everything from before the roaring twenties to prohibition and the gangster era" before settling down as a collection of "dingy bars, night clubs and strip shows" – which is a brief history placing the story in the 1950s or early '60s. So the story definitely had a pre-2002/2013 publication, or version, but there are also some technological clues suggestion stuff had been added later. Cars, guns and landline telephones are the most sophisticated pieces of technology in the story, which also pushes the dating of the book closer to the fifties or sixties. But it made two things particular stick out. When Merak is brought to the mansion of the big crime boss, he "scanned the corners of the wall for any cameras" that might be studying his reaction. I know CCTV is an inheritance from World War II and the possibility was there as early as 1949 to have a live (unrecorded) monitoring television system, but it was pretty obscure until recording the footage was possible. That didn't happen until 1960s and '70s. A second thing that stood out is when Merak burglarized a shop, he cuts a hidden wire that would trigger an alarm at police headquarters, if he tried to force the window. This kind of (wired) burglar alarm seems too modern for the 1950s and too antiquated for the 2000s and 2010s. So here have a story clearly set somewhere around the middle of the previous century, but with two different publication dates from the next century and stylistic touches suggesting the text was slightly modernized. Long story short, Thrilling Detectives is probably right about the 2000s titles being retitled novels.

An addendum: Philip Harbottle emailed an important correction as the later Merak stories are not rewrites of earlier stories. I was given permission to add his correction as an addendum to the review, because I didn't want to remove or smudge over my mistake. So here is Harbottle's email:

Pretty fair review of my friend and client John Glasby's novel, for which I thank you, but I would be very grateful if you could remove the rather offensive garbage quoted from that website—which you appear to endorse—that all later Merak stories were rewrites of earlier works. THEY ARE NOT. There were only 2 novels published in the late 50s: Blood on My Shadow (1956) and This Time Forever (1957). A third, The Savage City, followed in 1961, when the original publisher reprinted the first of them with a new title, Racket Incorporated, and when it was reprinted in the US in 1973, it was called The Organization. I preferred Racket Incorporated when I had it reprinted. ALL the others, beginning with A Time to Die, were brand new, original novels which John Glasby wrote at my request. He was halfway through a new one when he sadly died, and the fragment remains unfinished and unpublished. These later novels were of course simply SET in the late 1950s, which is the period Merak operated. Similarly, the text was NOT edited and updated by me, or anyone else. The second novel, This Time Forever (1957) has sadly never been reprinted, only because I have never been able to find a copy! The author never possessed one, since Spencer didn’t provide comps. I suspect it may well be one of the best, judging by Adey’s description.