James Yaffe was an American professor of English and mystery writer who debuted aged 15 with "D.I.C." in the July, 1943, issue of Ellery Queen's Mystery Magazine that introduced his first series-character and head of the NYPD's Department of Impossible Crime, Paul Dawn, who appeared in half a dozen short stories – published in EQMM between 1943 and 1946. A regrettably uneven, short-lived series that peaked with the brilliant "The Problem of the Emperor's Mushrooms" (1945) and hit a low with "Cul de Sac" (1945). By the 1950s, the training wheels had come off and Yaffe created two new series-characters more closely aligned with Rex Stout and Ellery Queen than the John Dickson Carr inspired Paul Dawn stories. 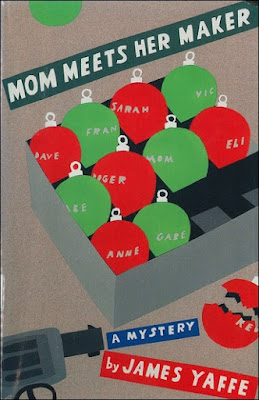 Dave is a detective on the New York Homicide Squad who visits his Jewish Mom every Friday in the Bronx to tell her about his latest unsolved murder case and "between the chopped liver and the strudel she always managed to solve it," which made him an inspector before he was forty. Dave and Mom appeared in eight short stories from 1952 to 1968 and were collected in My Mother, the Detective (1997). A collection Mike Grost highly praised as "one of the most important contemporary collections of mystery short stories" with plots "as good as those in classical writers" like Agatha Christie. My Mother, the Detective received an enlarged edition with an extra story, "Mom Lights a Candle" (2002), but Dave and Mom had a real revival in the late 1980s and early '90s.

Yaffe revived Dave and Mom in four novel-length mysteries, published between 1988 and 1992, but the series had some notable changes in scenery and format.

Dave is now a widower and moved from New York to Mesa Grande, Colorado, where he become the chief investigator for the public defender's office, but disliked leaving his 75-year-old mother behind in her New York apartment – who had to find another pastime now that her "homicidal connection was cut." Playing detective was among "the greatest pleasures of her life" and she always looked forward to Friday evenings. So she moved to Mesa Grande as she was pleasantly surprised to discover "people kill each other just as easy in the Southwest as they do in the Northeast." Dave had enough cases with unusual features on his plate to keep his mother from being bored.

Mom Meets Her Maker (1990) is the second novel in the series and takes place during Christmas week. The story begins with a case grabbed from the headlines, "Minister Shot in Anti-Christmas Assault; Harvard Student Held for Attempted Murder," which played out a little differently than reported in the only newspaper of Mesa Grande.

Abe and Sarah Meyer retired to Mesa Grande, where they bought a one-story house with their savings, living not uncomfortably on Social Security and Abe's pension, but lately, their "paradise turned into hell." Two years ago, the Reverend Chuck Candy moved into the house next door with his family and nothing happened until last November. Candy began to extravagantly decorate his house until it resembled "the Christmas display window of a metropolitan department store" complete with lights, "flickering on and off in five different colors," across the roof, windows and statues of Santa Clauses, the Virgin Mary and Child. All of it "outlined in bright garish orange neon," also flickering on and off, while the lawn Santa Clauses make "appropriate ho-ho noises." There were also loudspeakers blaring thunderous Christmas carols from early morning to late into the night, which attracted a lot of sightseers. That began to take its toll on the Meyers.

So when their son, Roger Meyer, comes home from Yale and saw the nervous, frayed state of his parents, he goes next door to confront Candy, but it becomes an altercation in which a gun is drawn and fired – leading to Roger being arrested for assault with a deadly weapon. The case ends up on the desk of the Public Defender and Dave's boss, Mrs. Ann Swenson, who immediately find themselves caught in a two-way fight. They have to ensure Roger gets the best possible defense guaranteed by the American Constitution, but Arthur T. Hatfield, of the Mesa Grande Republicam-American newspaper, is making a personal crusade out of a Jewish, out-of-town student shooting a local Christian minister over Christmas lights and music. Already accusing the local authorities of being soft on crime and allowing "their hearts bleed for the lawbreaker" at the expense of his victim. 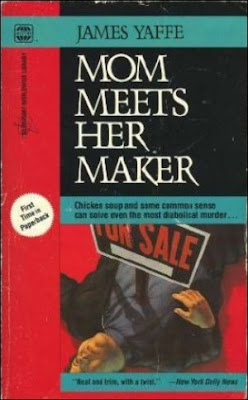 Mom nudged Dave in a direction casting a more sobering light on the Christmas decoration fracas and potentially good news for Roger, but then Candy is shot and killed in his own home. His body was found in the living room practically under the Christmas tree, which is very relevant. A wounded and dying Candy opened a present with crayons and wrote a dying message on the carpet, "GOLD, FRANKINCENSE AND MYRRH."

An incomprehensible dying message that the local police has no use for as they bloody shoeprints in the hallway and fingerprints on the murder weapon incriminating Roger Meyer. There's even a witness who saw Roger entering the home around the time of the murder and came running out five minutes later "looking very agitated." Since he's nowhere to be found, the case against Roger looks very grave. Even worse is that Dave and Swenson have to contend with different parties who, for one reason or another, try to muscle in on the case. The local chapter of the ACLU (The American Civil Liberties Union) wants to take over the defense and they can get a well-known lawyer, Victor Kincaid, who "had defended every radical and war protester and activist in sight" during the 1960s. Swenson knows what he wants to defend is a symbol. Not a person. So he wouldn't shy away from making a media spectacle out of the case with Roger's life hanging in the balance. On the other hand, there's the small town politics with demands Roger pleads guilty to second-degree murder to prevent damaging the reputation of a town currently undergoing considerable growth.

All of this takes place against the preparations and eventual celebration of Christmas with Santa Clauses doubling in the streets every day, the traditional lightening of Christmas Tree and a never-ending stream of Christmas songs and movies on the radio and television – while "Joy to the World" was being caroled all over town. You're advised to pay close attention to these festive scenes or you might miss something very clever and subtle that went unacknowledged in Mom's solution.

So, right up until the ending, my impression is that Mom Meets Her Makes was nothing more than one of those modern, lightweight mysteries (borderline cozy), but with the serious frown of a contemporary crime novel. Well, I lived up to my reputation as a fallible armchair detective. You see, I wrongly assumed I spotted the key to the dying message that identified the murderer with only the motive requiring a bit of educated guesswork, which turned out to be a trap. A very, very deep trap as Yaffe went full-blown Ellery Queen with twists and false-solutions. Every single false-solution could have ended the story without leaving me disappointed at the end. Mom Meets Her Maker gloriously broke with that long-standing tradition of the false-solution(s) outshining the correct one! Yaffe interestingly wrapped up the false-solutions in the title of the book.

Mom Meets Her Maker opens and closes with Mom praying to God and asking for guidance, because she has not told the whole truth and has a crisis of conscience. What she has withhold from her son and the authorities gives one last and correct interpretation of the dying message, which has the kind of religious imagery that can be found in EQ. It's a shame Frederic Dannay was no longer alive when the book first appeared. He would have loved this seasonal, 1990s take on The Glass Village (1954) stuffed with all his favorite plot ingredients!

Lastly, I have to go back to Mom as an interesting specimen of the armchair detective. Dave regularly reports back to her and, while he eats, she listens and "no detail, no matter how trivial, ever escapes from that rat-trap memory of hers." She does some sleuthing on her own and, while that happens off-page, it makes her a very active armchair who works on her feet. Whether she's feeding her son or talking to people under the guise of being social, Mom is gathering and piling on the details to make up her case. So I can see how the original run of short stories may have influenced Isaac Asimov's Black Widower series. Yaffe's Mom and Asimov's Henry are two characters cut from the same cloth.

Mom Meets Her Maker is a remarkable addition to the lineup of seasonal-themed detective novels doing the murder around Christmastime the American way. Exuberantly loud! No quiet, snowed-in mansion in the British countryside, but a town decorated from one end to another complete with gunfire, petty, small town politics and a bit of religious strife. What's hiding underneath, like a wrapped present, is a first-rate, EQ-style detective story with multiple false-solutions superbly making use of the dying message trope. There are surprisingly few classic dying message novels, or even short stories, but Yaffe's Mom Meets Her Makes can be counted among those few classics.