Here Be Dragons: "The Donnington Affair" (1914) by G.K. Chesterton and Max Pemberton

I've commented before that the size and scope of the traditional detective story never ceases to amaze me. Every time you think you know the lay of the land, a completely forgotten, long out-of-print writer is rediscovered or the growing popularity of translations breaking open a previously inaccessible part of the genre – like a large and open world that can be perpetually explored. Over the years, I've stumbled down an obscure rabbit hole, or two, but you don't always have to navigate uncharted waters to find dragons. 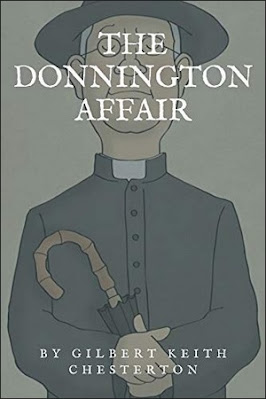 I knew G.K. Chesterton wrote two uncollected Father Brown stories, "The Vampire of the Village" (1936) and "The Mask of Midas" (1936), when he was practically on his deathbed, but only recently discovered he co-wrote a proto-Detection Club tale during the early months of the Great War.

Max Pemberton was a British writer of crime-and adventure fiction who's a "somewhat of artistically minor member of the Rogue school" and published an unfinished crime story in the October, 1914, issue of The Premier. The open-ended story, "The Donnington Affair," posed a challenge "to several leading mystery writers of the day" to come up with a solution to the murder Pemberton so carefully described. Chesterton appears to have been the only one who picked up the gauntlet and neatly tidied up the whole problem in "Father Brown and the Donnington Affair," which was published in the November issue of The Premier and then promptly forgotten about until the 1980s – when it was rediscovered and reprinted in The Chesterton Review. The two halves have since been reprinted as a single story and can be found in The Complete Father Brown Stories (2012). But why "The Donnington Affair" remains so little-known today is a mystery as it has the kind of plot complexity you'd expect from the detective story of the 1930s and '40s.

The first half of the story introduces the Priest-in-charge of the Parish of Borrow-in-the-Vale, John Barrington Cope, who's engaged to Harriet Donnington, but her home life is an unhappy one. Harriet and Evelyn live at Borrow Close under the thumb of their domineering, old-world father, Sir Borrow Donnington, who "shut the doors alike upon the old world and the new" when his wife passed away. Ever since Lady Donnington's death, the place "has become mediæval in its isolation" with Cope being the only visitor as a future member of the family. That makes him the lucky one. Sir Borrow rudely showed Evelyn's suitor, Captain Kennington, the door and disowned his only, troublesome son. A "disgraceful affair" ended Southby Donnington's university career and became "a derelict in the dangerous seas of London's underworld," which ended with him being arrested on a charge of forgery and sentenced to three years in prison. So his father "swore that Southby should never enter his house again," but that becomes a sticky situation when he escapes from prison with a cellmate. Before too long, the grounds of Borrow Close are swarming with suspicious-looking characters (policemen in disguise) and culminates with a tragic murder of one of the family members.

Pemberton's portion of the story ends with the line "God send us enlightenment that the guilty may be punished" and Chesterton, acting as deputy deity, dispatched Father Brown to the scene of the crime.

Father Brown is true to form. Appearing unexpectedly as "a stumpy, apologetic person with a big hat and a bad umbrella" who sees meaning in seemingly meaningless statements and unimportant things. Such as pointing out "that in a murder case the guiltiest person is not always the murderer" or that the key to the case might be found in the statement that Southby's cellmate was "the cheeriest person possible." Slowly, but surely, Father Brown bicycles the reader through a surprisingly complex plot towards a solution that felt both logical and enviable to the point where you almost believe Chesterton and Pemberton had the whole thing planned out from the beginning!

There were, however, two aspects that were a little hard to swallow. Such as (ROT13) gung jubyr pbireg cbyvpr bcrengvba bire jung'f ernyyl abguvat zber guna n fvzcyr sbetrel pnfr and I was rather skeptical of gur snzvyvny erfrzoynapr va unaqjevgvat “nyzbfg nzbhagvat gb snpfvzvyr," but the latter seems to have some truth to it. So why has almost never been used in a detective stories? You would expect mystery writers to be all over such a handy piece of misdirection.

Chesterton wrote much better, more memorable Father Brown stories, but his collaboration with Pemberton is still far above the average detective story of the 1910s and historically significant as an ancestor of future round-robin mystery novels – like The Floating Admiral (1931) and The President's Mystery Plot (1936). More than deserving of being re-rediscovered today. And, perhaps, there's more to be uncovered or even added. Who were the other leading mystery writers of the day Pemberton challenged to find a solution? Did anyone beside Chesterton accept the challenge? What happened to their story? There seem to be some clues and hints in Pemberton's half that could potentially have opened the door for other writers. The story mentioned that one of the characters knows “half the crooks in Europe” and one of its most well-known crooks is E.W. Hornung's A.J. Raffles. Chesterton glossed over "terrible wound in the throat" of the victim, but a murder weapon was never identified and could have attracted the attention R. Austin Freeman's Dr. John Thorndyke or any of the other scientific detectives from that era. A collection with all of their different takes on Pemberton's problem would have been an iconic work of the pre-GAD era. A murder that takes place across the mystery multiverse and solved by the best detectives of that era in their respective universes. Ah, the road not taken!

So why didn't it happen? Probably bad timing. Hornung stopped writing fiction in 1914 and Freeman, like so many at the time, become involved with that little skirmish known as the First World War.