Inspector De Klerck and Murder on the Scene (2021) by P. Dieudonné 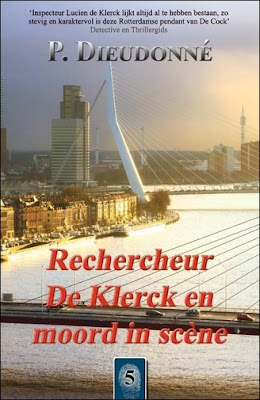 Rechercheur De Klerck en moord in scène (Inspector De Klerck and Murder on the Scene, 2021) plays a similar game as its predecessor, but improved on it as the Inspectors Lucien de Klerck and Ruben Klaver have to digest a heavily leaded slice of Urban Americana in Rotterdam. But, as the detective story has learned its readers over the centuries, nothing can be more deceiving than outward appearances.

Inspector De Klerck and Murder on the Scene begins with De Klerck putting down the Rotterdams Dagblad and remarks to Klaver that "the youth is unhinged, orphaned" in response to an article about the discovery of drugs, fireworks and weapons in the lockers of a high school – including "a hand grenade and a loaded gun." Klaver puts it down to puberty and hormones, but that doesn't wash with the old detective and De Klerck fears that "today's street urchins are tomorrow's hitmen." And that's when their shift really begins. A skipper and old friend of De Klerck reports someone attempted to throw a gun into the water from a bridge, but the loaded, recently fired gun landed on his boat. Klaver remarks they might have gotten hold of a murder weapon and CCTV footage of the various bridges could catch them a killer before his crime is discovered ("we have never worked so fast"). Just a moment later, they're called to the Parkkade where the Harbor Police pulled a body out of the water.

The victim is very well-known to the police, Robin Breidenbach, who's "an equally popular and notorious Rotterdam rap artist." Breidenbach was known as Da Rotting Thug and his "incendiary raps" earned him admiration as well as a ton of enemies, which include an escalating blood feud with Yunus Özütok's De Leftbank Militia from Rotterdam South. A year ago, Özütok was stabbed and robbed, but he blamed Breidenbach. Two weeks later, Breidenbach's cousin was stabbed and seriously wounded by a member of De Leftbank Militia, which left him with a limb. Justin Breidenbach never mentioned this to De Klerck and Klaver, but directed their attention to his cousin's producer, Daan de Rooij. Apparently, they were having a disagreement over royalties. De Klerck sees a parallel with a "rivalry between rappers from New York and their more successful Californian colleagues" in which the two figureheads of the feud, Tupac Shakur from Los Angeles and Notorious B.I.G. from New York, were shot and killed. Is history repeating itself a quarter of a century later in Rotterdam?

So not really the plot-ingredients you expect to find in a detective story with a more traditional bend and Inspector De Klerck and Murder on the Scene does have all the outward appearances of an uncomplicated, modern-day police novel. Dieudonné gradually and effectively spins a complicated puzzle out of an apparently ordinary and sordid crime with every new piece of information that's unearthed bringing both clarity and posing new questions. Like peeling an onion in reverse! I was reminded of the commentary on Christopher Bush's plotting-technique "of starting with very little information (victim's identity) and working outward, lightening up the darkness." A very fitting description of the plot and how it progressed with (for example) the discovery of the original scene of the crime revealing that the murder was a tricky and complicated affair, which would not have been out of place in a Golden Age mystery novel – except perhaps for the clothing and music. While the clues and red herrings were not thickly spread around the story, the ones that were present were on a whole of a good quality. The central clue is not so much a traditional clue as it's a curious, very subtly planted anomaly (oyhr, havsbezrq nyvovf) doubling as a slippery red herring. Something you either spot and note as a suspicious coincidence or miss entirely, but, if you spot it, you can work out the solution.

When I read the synopsis, I assumed Dieudonné was going to go easy on the plot this time around and dreaded having to bang out a lukewarm review, but Inspector De Klerck and Murder on the Scene exceeded all my expectations and ranks alongside Inspector De Klerck and the Elusive Death as the best the series (so far) has to offer. A series that's fast becoming a personal favorite as its soothing to my nostalgic cravings and meets my demands for good, quality plots. Dieudonné, De Klerck and Klaver deserve to be introduced to an international, English-speaking audience who will be more appreciative of them. But, in the meanwhile, I'm eagerly looking forward to the next one!

If you haven't had your fill of untranslated, Dutch-language detective fiction, I recently reviewed Vanno's De moord op het sloependek (The Murder on the Boat Deck, 1941) and Anne van Doorn's Meer mysteries voor Robbie Corbijn (More Mysteries for Robbie Corbijn, 2021). And, yes, I crammed this review into a few planned posts, because didn't want to wait with posting the review until January.