The Case of Alan Copeland (1937) by Moray Dalton

Looking back over my recent blog-posts, it became very evident I have been overly indulgent of everyone's favorite detective sub-genre, locked room and impossible crime fiction, but, every now and then, you need to dismount from your comfy hobby-horse. So it seemed like a good idea to pick as my next read something that's the complete opposite of a trickily-plotted locked room mystery. 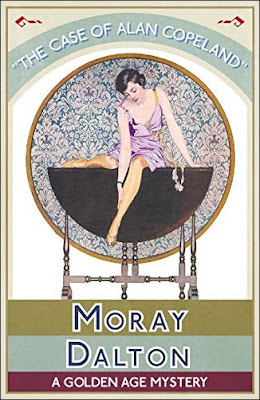 The Case of Alan Copeland (1937) is the seventeenth mystery novel by "Moray Dalton," penname of Katherine Renoir, who wrote twenty-nine mysteries between 1929 and 1951, but despite her productivity she had been entirely forgotten for the better part of a century – until Dean Street Press started reprinting her novels in 2019. Over those few years, Dalton reemerged from obscurity as a precursor of the modern crime novel with her "criminally scintillating," character-oriented mysteries with attitudes or subject matters that were sometimes a few decades ahead of their time. This could possible have contributed to Dalton's obscurity.

Curt Evans, of The Passing Tramp, who introduced the new DSP edition is Dalton's most well-known champion today, praising her ability to "plot an interesting story and compose an intriguing sentence," but it's her strong, vivid characterization that makes her work standout. Curt commented on my review of The Strange Case of Harriet Hall (1936) is that what makes Dalton unique to him is that she actually makes him worry about her characters, which made her unusual during a period "when so many mysteries are drier academic exercises." The Case of Alan Copeland holds a similar attraction being "an emotionally gripping and credible tale of murder" with "genuine detection" and indications to the murderer's identity laid throughout the book. That's what attracted my attention to the book.

The Case of Alan Copeland distilled the village mystery to a closed-circle situation with the cast of characters comprising of the only handful of notables populating the tiny hamlet of Teene.

Mabel is the cruel, sharp-tongued and tightfisted older wife of former artist and now struggling poultry farmer, Alan Copeland, who felt obliged to marry her after she nursed him back to health, but has become completely depended on her and made him give up painting – determined "he should not waste her money on paints and canvas." She knows how to wound her husband with mean-spirited, carelessly uttered comments. Miss Emily Gort is "one of these ultra prim and proper old maids" who's Mabel confidante and actually enjoys some of her charity. She also dotes on the vicar, Reverend Henry Perry, who's wholly consumed by his meticulous study of the Byzantine Church in the fourth century. Old Mrs. Simmons is an "ex-barmaid grown monstrously fat" who presides over the village from her a wayside garage and petrol station where she reads people's fortune with a pack of greasy cards. She runs the place with her flapper daughter, Irene, whose supposed to marry her cousin, Ern, but she's in love with Alan. Miss Getrude Platt is the local schoolmistress with an unconventional taste in art and literature, but she used to be a fellow art student of Alan before becoming "an instructress of youth."

This small community receives a delayed shock when the vicar's niece, Lydia Hale, comes to stay with her uncle to recover from the flu. After a fortnight, she leaves again without realizing she's pregnant with Alan's child. Remember this was still a controversial and touchy subject at the time, which usually meant ruin to a woman's character and reputation. But, as Curt noted in the introduction, Lydia doesn't suffer from any "recriminations against her character" except from the people who the reader is supposed to dislike. So I can understand why Dalton has a click with crime-and mystery reader's of today. Not their little moment of weakness is without some terrible consequences.

When they're unexpectedly reunited in London, Alan is wearing a mourning band on his sleeve as he recently became a widow. Mabel had passed away after a very brief, but not unexpected, sickbed and she left him all her money. Alan "arranged for the sale of his stock, shut up the house and left the neighborhood for a while" and agreed to immediately marry Lydia when he learns she's pregnant. Nine months later, they return to the village, but hardly anyone approves of Alan remarrying before the year of mourning was over. It wasn't long before tongues began to wag. The police started receiving anonymous, spitefully worded letters accusing Alan of murder.

A discreet investigation provides the police with ample justification to exhume Mabel's body and Alan is indicted for murder, which is where the story shifts from a character-driven crime story to an investigative legal drama – culminating in the trial of Alan Copeland. Strangely enough, this second-half reminded me of the style of crime novels from the late 1800s, like Fergus Hume's The Mystery of a Hansom Cab (1886), as there are several investigative characters involved with the case. There's the official police, represented by Detective Ramsden, who unearthed all the incriminating evidence. Alan's country lawyer, John Reid, who engages Hugh Barrymore to defend his client in court and advises Lydia to not talk to the press, because Barrymore isn't cheap. She might need to sell her story later on to cover all the legal costs, which is one of those sobering realistic touches that makes Dalton's work standout. John Reid also hires a private detective, George Hayter, to go over the case again and track down the anonymous letter writer. Hayter began his investigation believing Alan was guilty as hell, but changed his mind in spite of everything.

Needless to say, the second-half is my favorite part of the story, but can't deny the buildup to the murder was not expertly handled and particularly liked Dalton showing the characters saying one thing and thinking another. I actually liked the entire story right up until the murderer's identity is revealed, which failed to impress me. I half-suspected this person, but a small, important piece of information was withheld from the reader (ROT13: gur nhag jub qvrq bs gur fnzr fhccbfrq vyyarff nf Znory) which made the dramatic court room revelation possible. However, I hold a minority opinion on the ending and The Case of Alan Copeland is not about cast-iron alibis, dying messages or impossible crimes. It's a character-driven, legal crime drama focusing on the impact of a murder on a small group of people and it does that very well. Even if the ending didn't live up to my personal standards, but I have little doubt Dalton will come to be known in future years as one of the Crime Queens of the detective story's Renaissance Age.

That being said, Dalton's The Night of Fear (1931) and Death in the Cup (1932) were more to my taste with the former being an excellent, highly recommended Christmas-themed mystery. One of the earliest examples of such holiday mystery. I'm eagerly looking forward to a reprint of her post-Apocalyptic detective novel The Black Death (1934).