Kate Wilhelm has a long service record as a fiction writer, debuting with a short story in a 1956 issue of Fantastic, who contributed to such a wide variety of publications as Cosmopolitan, Asimov's Science Fiction, Ellery Queen's Mystery Magazine and Magazine of Fantasy and Science Fiction – a variation of genres that can also be found in her novels. Over a period of half a century, she penned an impressive stack of detective and science-fiction novels.

Well, I recently stumbled across one of her many detective stories and found the book in, what could be considered, an obvious place, but had not expected to it there: namely my own TBR-pile. I had completely forgotten about its existence until recently. 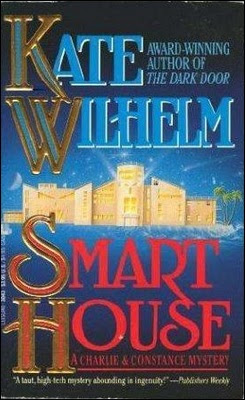 Last week, one of my fellow bloggers, "JJ," attempted to help me find a modern-day locked room mystery and hinted, before the blog-post went live, that the book he had been reading was originally published in the late 1980s – which activated my fanboyish curiosity and began to check my backlog. After all, there couldn't be that many impossible crime novels published on the tail-end of the eighties, right?

Apparently, there were enough of the infernal things to prevent me from correctly identifying the book, but did come across a peculiar looking locked room title, on the big pile, promising a manor house mystery covered with the fingerprints of the science-fiction genre.

Smart House (1989) tells the story of the brainchild of a computer prodigy, Gary Elringer, who founded the Bellringer Company, but the hard-and software business stopped being profitable once the boy genius began to work on his most ambitious project - "a computerized, automated house." A project that has become a deep, dark financial rabbit hole and not every one of the the nine shareholders are thrilled with Smart House. Gary's furious older brother, Bruce, is even attempting to organize "a palace coup." However, the computer genius is spoiled to the core and expects things to go his way, which is how things usually turn out.

So when Gary invites the shareholders to his futuristic home, situated on the Oregon coast, everyone turns up. And they all go along with the ridiculous demonstration he has planned for them.

A "stupid game of murder," called Assassins, in which players are assigned a designated victim by the computerized house and they have to eliminate their target "in front of a single witness" and log the kill into the computer – after which the house assigns a new victim to the successful killer. Each kill earns them one vote and the last one standing takes all. The "weapons" (i.e. toys) are kept in a showroom, inside a case with "a computer lock," which allows players to pick only one weapon for every kill.
It's "a game for children," one of them complains, "grown-up people don't play such childish games," but they all go along with Gary's wishes. And that makes for some nicely imagined scenes.

The group of shareholders, and players, consists of professional, intelligent and respectable people, but Gary puts them in such a position that they find themselves sneaking around an intelligent house, logging every step they take, while being armed with children's toy – such as squirt guns, ribbons and balloons. It's reminiscent of the surrealistic quality often found in the work of Ellery Queen. A feeling strengthened when, shortly after each other, two people die under seemingly impossible circumstances. 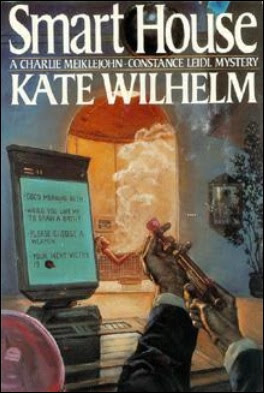 Rich Schoen is the architect who helped design the house and his body turns up in a closed elevator, which had the air sucked out of it by the automatic vacuum system. A short while later Gary's body is found inside a sealed-off Jacuzzi. The computer logs proved nobody was near them at the time they died and the police decided there were glitches in the computer program, but an computerized, semi-sentient house that can kill its occupants would prevent the company from recuperating as much as a dime that went into its creation.

So they engage a couple of private-investigators to prove a human murderer was responsible for both deaths. Unfortunately, at this point in the book, the story experienced a slump.

Charles Meiklejohn and Constance Leidl were obviously meant to be a modern-day equivalent of Frances and Richard Lockridge, as they, too, are a childless couple with a bunch of cats, but the former misses the joie de vivre of the latter. They did, however, do some proper detective work by going over everyone's movements, and such, but these chapters were bare of any interest and the snail pace of the story-telling did not exactly help either.

What about the impossible angle, you ask? Well, I should have half expected this from a hybrid mystery, but the answer to how anyone could wander around the house without being logged is the science-fiction equivalent of a murderer using a skeleton key in a locked room mystery – which is a letdown to say least. Particularly when its given around the halfway mark. It's a real buzzkill on the rest of the story.

Smart House slightly redeemed itself in the end with a somewhat decent explanation, but it showed that the book should have been written as a novella-length story.

Well, as you can judge by my comments on the opening chapters, I really wanted to like the book, as a whole, which prevented me from skimming to the end or giving up altogether. However, the story becomes tedious drag between the discovery of the bodies and the explanation. A real shame as the ideas present in the story had real potential and some of the science-fiction elements are now reality (e.g. handheld computers and A.I. surveillance). So, sadly, I can only recommend Smart House as a curiosity of both the detective-and science-fiction genres.

No idea what I'll dig up next, but, hopefully, something good again and might pull another impossible crime story from the bookshelf, because I just noticed this is my 299th blog-post tagged as a locked room mystery!
Geplaatst door TomCat on 6/01/2017