"My reputation as a meddler had preceded me..."
- Hildegarde Withers (Stuart Palmer's Miss Withers Regrets, 1947) 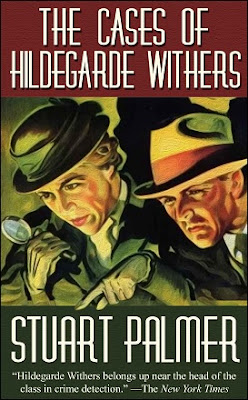 Miss Withers is an angular, prim-looking schoolteacher at Manhattan's Jefferson School, where she presides over a third-grade class of hooligans, but she also has an uncanny knack to always be around when a body turns up – earning herself a reputation with the NYPD as a "meddlesome old battleaxe." Fortunately, she also happens to be one "the smartest sleuth" in or "out of uniform."

On the surface, it seems like your standard detective series with an inquisitive, nosy spinster as the protagonist, such as Agatha Christie's Miss Jane Marple and Patricia Wentworth's Miss Maud Silver, but (IMHO) Palmer and Miss Withers are leagues ahead of their competition. Even John Russell Fearn's wonderful Miss Maria Black is only a distant second in my book.

One of the reasons is the figure of Miss Withers, who's far more convincing character than many of her counterparts, but even more important is that Palmer possessed both a brain and imagination, which he used to construct some clever and imaginative (puzzle) plots – e.g. The Puzzle of the Pepper Tree (1933), The Puzzle of the Blue Banderilla (1937) and Nipped in the Bud (1951). But he was equally adept at writing short detective stories (e.g. Hildegarde Withers: Uncollected Riddles, 2002).

So you can read the content of The Cases of Hildegarde Withers as specimens of Palmer's versatile talent as a mystery writer, because the short stories within this collection range from whodunits, alibi-tricks, a smash-and-grabber and a locked room story of the inverted variety! Let's take a crack at them.

The first story, "The Puzzle of the Scorned Woman" (a.k.a. "The Riddle of the Lady from Dubuque"), was originally published in a December, 1947 publication of New York Sunday News, which cast Miss Withers in the role of "a precautionary measure." Elsie Pender has trouble accepting that the man she loves, Paul Severance, is going to marry another woman and she wants Hermione Lapham to pursued her daughter to blow of her marriage to the plastic surgeon, which is, naturally, out of the question.

However, Pender appears to have gotten her hands on a .38 automatic and Mrs. Lapham is afraid the girl might do something irreversibly stupid. So the head of the Homicide Division, Oscar Piper, turns to the department's gadfly, Miss Withers, because it's difficult for them to act when nothing concrete has happened. But there's not much she can do: Pender is found in Severance's private office with two bullet-holes in the chest and an obviously forced suicide note besides her. Miss Withers solves the case by making an astute observation about her clothes and gloves, which tested negative when they were subjected to a nitrate test. A good, short and simple story with a nifty little twist in the tail.

The next story, "The Riddle of the Yellow Canary," first appeared in a 1934 issue of Mystery and is my personal favorite from this collection! 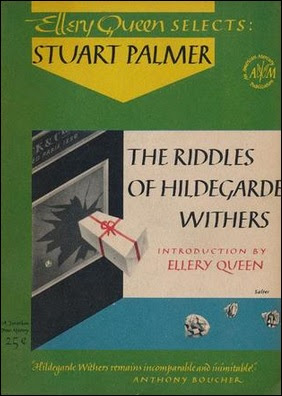 A music publisher from Tin Pan Alley, Arthur "Art" Reese, has a pesky problem on his hands, named Margie Thorens, who has made it "necessary that she be quietly removed" and has working on a scheme for months – which is put into action with near perfection. Reese slips Margie a poisoned capsule and dictates song lyrics to her while he watches her die, but the clever part is that the song text can be construed as a lyrical suicide note. And as a finishing touch, Reese's leaves her body behind in a room with "a door locked on the inside." The locked room trick is a very simple one, but you rarely get an impossible angle in an inverted mystery. So that was a nice feature.

Inspector Oscar Piper invites Miss Withers to accompany him to the scene, because she always wanted to know how "the police can spot a suicide from a murder," but the bugbear of the police department becomes convinced this suicide is a well-disguised murder. She got a substitute teacher to take over her class and devoted her time to study locks and poisons, but the tale-tell clue came when she discovered the victim had a pet canary. A chirping little creature who proved to be the not so silent witness that strapped Reese to the electric chair. It's an absolute ace of a short story.

The third story of the lot, "A Fingerprint in Cobalt" (a.k.a. "The Riddle of the Blue Fingerprint"), was first published in 1938 in New York Sunday News.

The story opens, uneventfully, at an auction of antiques and the audience show a complete disinterest in a mahogany wardrobe. A heavy beast of burden that took three men to lift onto the platform, but auctioneer is not easily deterred and orders one of his helpers to open to wardrobe to show everyone how much storage space they could own. Someone else had noticed that convenience as well. When the wardrobe is opened, the body of a man comes tumbling out.

Dr. Carl Brotherly was a collector of "Oriental statuettes" and tucked inside his shirt was a postcard-sized photograph of a fingerprint, but why was it found on the body of a murdered collector? Luckily, Miss Withers had a very good reason to be in attendance at the auction and discovers why the police were unable to identity the fingerprints, which points straight to the motive for the murder and the murderer. Another simple, but good, story with a pretty novel idea (the titular fingerprint). I believe the idea, along with the basic premise, could have been developed into a full-length detective novel.

The fourth story, "The Riddle of the Doctor's Double," has a copyright date of 1936, but doesn't appear to have a publishing history prior to 1946 when it was printed in the August issue of Ellery Queen's Mystery Magazine. I can only assume that the story was shelves, or failed to sell, on account of the underperformance of the plot. The premise was promising enough, but the solution was painfully transparent.

Inspector Piper and Miss Withers are present to give aid to an old, feeble and dying man, but his personal physician informs the duo that he believes a very impatient would-be-murderer is helping the old man along to the other world – which is confirmed when, a short while later, the man is murdered in his own bed. However, the person who was admitted to the sick man was his own doctor. Or to be more accurate, the person appeared to be a spitting image of the doctor. And the latter came around to see his patient mere minutes after his double had done the dirty work. 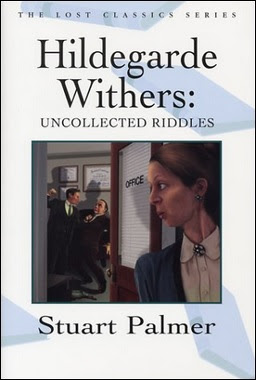 A fantastic premise with all the potential in the world, but everyone with measurable brain activity can see through the charade. A surprisingly poor attempt at a least-likely-suspect story from one of the Greats of the Golden Age. But hey, every short story collection has an obligatory dud or two. Even in a slim volume like this one.

Finally, we get around to "Green Fire" (a.k.a. "The Riddle of the Green Ice"), which was first published in The Chicago Tribune in 1941 and has an unusual kind of problem for Miss Withers: a series of smash-and-grabs of jewelers display windows, but the latest one leaves a police officer dead – shot while he tried to stop the criminal. You would expect such a plot between the pages of a hardboiled crime story, but Miss Withers make some astute observations and clever deductions that provides Inspector Piper with profile of the jewel-snatcher.

Such as the criminal being an egomaniac (the brick was wrapped as a gift with happy birthday on it, because the jeweler's shop was celebrating an anniversary), wanted by the police (desperate enough to shoot his way out of the situation) and he was new to the jewel racket (since he left a valuable green emerald). However, the story has much more to offer as the criminal returns for that "25-carat hunk of green ice," eludes the dragnet, while Miss Withers also has to tango with a mad house-painter and locate the hiding place of the missing emerald.

Sounds confusing? Well, perhaps. However, the story is much clearer than my brief description, but the overall effect is somewhat marred by Palmer's attempt to pack as much plot in twenty-some pages. I think this story warranted a larger page-count. Still, it's nice little story showing what happens when a spinster sleuth, like Miss Withers, makes a wrong turns and ends up on those mean streets of Dashiell Hammett and Raymond Chandler. Glad to report she was able to hold her own!

All in all, a well balanced collection of short stories consisting of three good ones, one dud and a minor gem. So not bad. Not bad at all. But the collection and stories were so short that this read was hardly more than an appetizer. Who knows. Maybe I'll pull one of Palmer's unread Miss Withers novels from my shelves as a follow up, but we'll see what the next blog-post will bring.
Geplaatst door TomCat on 6/08/2017