A Cosmos of Crime

"Of much I am not sure. But that we shall be better and braver and less helpless if we search for truth than we would have been if we had indulged in idle fancy that there was not knowing and no use in seeking to know – that is a theme on which I am ready to fight in word and deed, to the utmost of my power."
- Socrates

Richard Purtill is the Professor Emeritus of Philosophy at the Western Washington University who dabbled in science fiction, fantasy and non-fiction, and elements from these genres were poured in Purtill's sole mystery novel, Murdercon (1982). 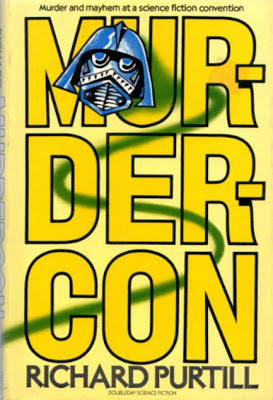 The layman detective of Murdercon is a professor of philosophy, Athena Pierce, who published a science-fiction novel and enters, for her, uncharted territory by attending a SF/Fantasy convention at the Aztec Hotel – which mirrors the premise of another mystery set at a convention, Sharyn McCrumb's Bimbos of the Death Sun (1987). But the set-up is where the resemblances part ways. Murdercon is more focused on the plot as opposed to fan-lore/pop-culture references, which were still an integral part of the story and that made this book one of the better convention-mysteries that I've read to date.

This will also be the umpteenth review of an impossible crime novel that slipped under Robert Adey's radar and was not listed in his bibliography of the locked room mystery – I can't seem to escape from them!

Anyhow, at the convention, Professor Pierce soon bumps into another key player, Dorothy Dodd, a member of the con committee and a dangerous woman who loves to play games with people, and recently forked over nine hundred bucks for a surviving copy of the first and only issue of a failed SF-magazine from the 1930s, Kosmos Tales. The plot thickens! But before plunging into a murder investigation, Professor Pierce has time to visit some panels and observe her new audience, and some of the observations on the SF genre were interesting from a mystery reader's perspective and this (snarky) remark from Dodd would be met with "hear, hear!" on here, if you replace SF/science fiction with mysteries:

"A bunch of academics who think that they're experts on science fiction because they teach courses on it and write papers about the SF writers they approve of."

A panel discussion is also the décor for the first murder when a toy gun toting figure, costumed as Darth Vader from Star Wars, disrupts the discussion and vanishes after producing a flash from his toy and one of the panel members, a certain Dorothy Dodd, lays sprawled across the table. The question is how she died, when it's out of the question that the toy gun was capable of delivering a shock that could've killed Dodd, let alone at a distance of ten feet, and no other obvious methods for electrocution are found. It's unlikely that Dodd was scared to dead by a goofy stunt by a disruptive fan. They were play-acting Logan's Run all over the hotel, but the second murder, staged and disguised as a suicide, is even cleverer and its presentation was very Jonathan Creek-ish while the plotting reminded me Gosho Aoyama's Case Closed (a.k.a. Detective Conan).

Over the course of Pierce's private investigation, she receives a phone call from a suspected wanted for questioning and this leads her, alongside a hotel bellman, to the room of yet another suspect – where they witness the person in question falling from an open window upon breaching the threshold. What is interesting is that the police almost immediately suspects trickery and the murders are never treated as impossibilities, by either the police or Pierce, but as another piece of the puzzle that requires further investigation, which was an approach favored by early American mystery writers like Jacques Futrelle and S.S. van Dine. The terms locked room mystery and impossible crimes are never dropped, but that doesn't make them any less relevant to the genre – if only for their presentation. I think a genre savvy reader will stumble to the answers, or the main gist behind the trickery, very early on, however, Purtill never insults the intelligence of his readers by mystifying what's suppose to be obvious to everyone and the investigation is never far behind on the reader. That being said, I liked the trick behind the second impossibility more than the first one. It was more original and the explanation of the Darth Vader murder felt indebted to Fredric Brown's Death Has Many Doors (1951; another SF-themed mystery).

Before the end of the case, Professor Pierce has to face that staple of Silver Age mysteries, starring down the barrel of a loaded gun, among several other hostage/hostile situations – while moving between the convention and such locations as the historic Coronado Hotel and the San Diego Zoo. I should also mention a plot thread involving a "lost story" by Stanley Weinbaum, and while this trope is not unfamiliar in mysteries, Edmund Crispin's Love Lies Bleeding (1948) revolves around a lost Shakespeare play and John Dickson Carr wrote a teasing excerpt of a fourth C. Auguste Dupin short story in The Mad Hatter Mystery (1933), they do tend to end on a predictable note, but that's not a trap Purtrill fell into. But then again, adjusting history, it's like a stroke of the brush for a SF writer.

Murdercon was a fun read and discovering no less than two, fairly well done, impossible crimes was the icing on the cake, and while it's not perfect, I really enjoyed it and did not felt like wandering through a strange land. My only knowledge of science-fiction comes from The Hitchhiker's Guide to the Galaxy, SeaQuest DSV, no more than two or three actual SF novels and a handful of hybrid mysteries, but the plot of Murdercon had the same balance between the bizarre world of SF and a straight-up detective story as Mack Reynolds' classic The Case of the Little Green Men (1951) – another one that sneaked under Adey’s radar like an advanced spacecraft.