"It appears to me that this mystery is considered insoluble, for the very reason which should cause it to be regarded as easy of solution - I mean for the outré character of its features."
- C. Auguste Dupin (“The Murders in the Rue Morgue,” 1841)

After having dabbled in the "Silver Age," which is the label I recently applied to detective stories published between 1970 and 1990 with a traditional arch, I decided to return to one of the points of origin for the mystery novel and cross a title off my list that had been on there for far too long – At the Villa Rose (1910) by A.E.W. Mason. 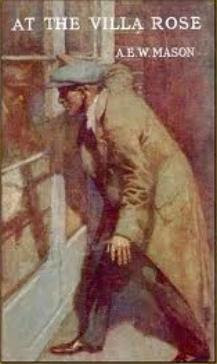 By the time Mason appeared on the scene, Conan Doyle had already left an inexpugnable mark on the landscape and it was the same year that G.K. Chesterton's The Innocence of Father Brown (1910) was released, but this case for Inspector Hanaud of the Sûreté captured the imagination of future mystery writers like Agatha Christie and John Dickson Carr. You can easily recognize Hercule Poirot and Captain Hastings in Hanaud and Mr. Ricardo, but more importantly, it's a part of what Carr referred to as the Grandest Game in the World!

The game begins for the reader at the Villa des Fleurs, situated in the small town of Aix-les-Bains, where Ricardo is studying the crowd around him staking their louis at the tables and observes two primary players: a wealthy businessman, Harry Wethermill, and a young, poorer woman named Celia. Wethermill allows Celia to gamble away thousands of his francs and shrugs the loss off as having a good time. But when Ricardo finds Wethermill on his doorstep, clutching a special edition of Le Journal de Savoie, there's not much left of the man from the night before. The paper screams about the savage strangling of Mme. Camille Dauvray and the manhandling of her maid, Hélène Vauquier, who was chloroformed and tied-up, before the house was ransacked for her famous collection of jewels and everyone's convinced that her missing companion was in on it – and that companion happens to be Celia.

Wethermill pleads with Ricardo to ask Hanaud, who happens to be holidaying in the area, to take charge of the investigation, but every single clue and thread they uncover/examine edges the blade of the guillotine closer for Celia and the investigative part is what put this novel in the Grand Tradition with clues that indulge in double-speak. The footprints, empty petrol cans, jewelry, tear stained cushion and a statement from the maid how Celia performed séances to control the susceptible Mme. Dauvray all point to her involvement in the murder, but to the Great Hanaud, they tell a different story and I was able to follow his train of thought without difficulty.

That's a drawback when you dib into these influential stories relatively late, but being able to chuckle along with Hanaud at the baffled Ricardo made up for that and it was intriguing to see the effect this novel had on two of my favorite mystery writers. The persecution of Celia and the amount of evidence stacked against her reminded me of Lesley Grant (Till Death Do Us Part, 1944) and Fay Seton (He Who Whispers, 1946), and it's been a while since I read Murder on the Links (1923), but wasn't that one rather Mason-like in spirit – which even included a French detective named Giraud. There's also a second murder, a stabbing in a slow moving cab of a witness, which can be considered a borderline impossible crime and something that must have appealed to a young John Dickson Carr. Not to mention the séances that is of paramount importance to the plot!

However, in turn, Mason drew from Conan Doyle's A Study in Scarlet (1887) to structure At the Villa Rose. In the first part of the book, we're introduced to the characters and tag-along with Hanaud and the second part is a reconstruction of that evening with an explanation of all the clues from the Great Detective himself. I'm not a fan of revealing the murderer midway through a novel, but in the context of the time, I think it was an improvement over Doyle's novelette-length prologue and something he, alas, repeated in The Valley of Fear (1915). I now wonder what that book, foreshadowing the kind of mystery novels from the Golden Age, would've been like if Doyle had integrated the second part the same way as Mason had done in At the Villa Rose – instead of ending on another prologue. Instant GAD?

I think fossilized gem is an appropriate description for At the Villa Rose. A modern mystery reader can follow the plot patterns like the spiral ridges of fossilized shells, but that won't bother the true connoisseur of the classics.
Geplaatst door TomCat on 5/09/2013