"Thieves respect property; they merely wish the property to become their property that they may more perfectly respect it."
- G.K. Chesterton (The Man Who Was Thursday, 1909)

Yes. I'm going through a post-Golden Age phase at the moment, because change is the spice of life and have hoarded a small pile of primarily Silver Age mysteries to devour over the next few weeks. I'll probably intersperse it with a few oldies, but mostly, it will be reviews of detective stories of a later vintage.

Oh, and that term Silver Age mysteries, I'll be using that from now on to describe crime fiction that was published during the 1970 and 80s. A stretch of twenty years that coincided with a new wave of writers who grew up reading Golden Age detective stories and that's something you can find back in the work of the likes of Bill Pronzini, Herbert Resnicow and William DeAndrea – without being throwbacks or cozies and they deserve a better name-tag than just "post-GAD." It's like calling them Johnny-come-latelies at their own game. And as Sherlock Holmes once remarked, "why shouldn’t we use a little art jargon?" 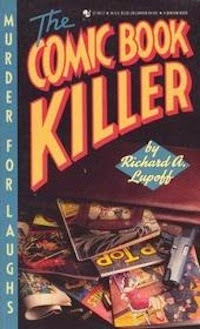 What put this nonsense of forgotten Silver Age back into my head was a delightful caper, The Comic Book Killer (1989), by debuting mystery novelist Richard A. Lupoff, which makes him dangerously close to a late Johnny by my own dating system, but it was the plot that really did it.

Hobart Lindsey is an insurance adjustor and receives in his first recorded outing a frantic claim from a comic-book store proprietor, Terry Patterson, who claims that thirty-five books were lifted from the Comic Cavalcade stock during a burglary – insured for a quarter of a million dollars! Lindsey's only ties to the world of comic books was his father, who died in the Korean War before he was born, but soon becomes more familiar by questioning collectors and knowledgably insiders.

Professor Nathan ben Zinowicz, for example, is a well known scholar of popular culture and plays the part of villain convincing enough that you suspect him of having a chunk of kryptonite in his top desk drawer, in case Superman dares to interfere with his nefarious activities again. Another line of investigation brings Lindsey to the doorstep of Cape 'n' Daggers, a store where comic-book fans and mystery lovers rub shoulders, where his, and the readers, education continues. The book is steeped in comic book lore, from Golden and Silver age, how to identify (comic book forensics basically) and value them and observations on comic/mystery fans and "literary extinction," i.e. when no copies appear to exist anymore.

But rest assured that The Comic Book Killer is more than a tour of the world of comic-book collectors and the plot is always on the move. There’s always something to be uncovered, someone to be questioned or somewhere to go. There are developments that complicate the case even further, like a shady figure leaving one of the stolen items on the counter of another store before slipping out, and the obligatory knock(s) on the detectives head followed by the gory murder of one of the involved parties. It's more of a how-does-this-all-tie-together than a whodunit.

The motivation for this whole scheme was interesting, a bit on the pulpy side perhaps, but interesting nonetheless. It was something different.

We're also getting peeks of Hobart Lindsey's personal life, who lives together with his mother in the same house but not in the same age. She never got over the death of her husband, and mentally, still lives as if the pass thirty years never happened. Meanwhile, Lindsey has bumped into a woman and has to worry about getting results – since his company doesn’t want to cough up that much money for a bunch of comic books. I've always preferred this snippet approach of characterization to the mini-biographies that appear to vampirize so many contemporary crime novels. Getting the characters to know little-by-little also seems more realistic as opposed to loading hundreds of pages with childhood angst and accounts of failed struggles with alcoholism, messy divorces and whatnot. Yes, I know. You've heard that tune from before. So lets sum this book up.

The Comic Book Killer is a fun crime-caper with a plot that kept up bubbling and bubbling, reaching a boiling point when Lindsey, once again, has to keep his wits in order to safe his life. All in all, this was a great first shot at Lupoff.
Geplaatst door TomCat on 5/03/2013