"The fact that we are I don't know how many millions of people, yet communication, complete communication, is completely impossible between two of those people, is to me one of the biggest tragic themes in the world."
- Georges Simenon

Een wolf in schaapskleren (A Wolf in Sheep's Clothing, 2013) is the eight in a series that began when Appie Baantjer and Simon de Waal, once colleagues as (homicide) detectives of the Amsterdam police force, partnered up to append another series of police stories to their writing credentials – under the banner Baantjer & De Waal.

After Baantjer passed away in 2010, De Waal continued the series as De Waal & Baantjer, and I have to say, after Een licht in de duisternis (A Light in the Darkness, 2012) that fully warmed me to the characters, it's starting to feel like the good ol' days of the biannual Baantjer releases. Unfortunately, you also burn through them about as fast. 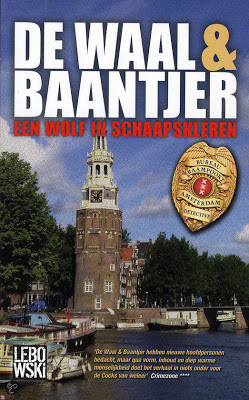 A Wolf in Sheep's Clothes begins when the persistent nagging of the doorbell drags Peter van Opperdoes, a veteran police detective attached to Bureau Raampoort, from his bed to the canal belt where the body of a John Doe is floating face up in the Prinsengracht (Princes' Canal). The cause of death is drowning, but whether it was an accident or murder requires further investigation on his and Jacob's part, which leads them to a barmaid named Rafiqa. Forensics was able to retrieve her number from the victims phone and the place where she works is Café Lowietje! The same café where the bar scenes for the TV-series Baantjer were shot and the place adopted the name of the series.

But the part were Peter van Opperdoes and Jacob seated themselves on the stools of DeKok and Vledder, while Rafiqu conjures a bottle of cognac from underneath the bar, was a wonderful homage to Baantjer – even more so by using some of his own writing to construct that particular scene. I also liked that Baantjer and Piet Römer, who portrayed DeKok, were mentioned and some anecdotes were shared. To be honest, I was a little bit disappointed that Van Opperdoes did not complain to Jacob about Simon de Waal bothering him with questions if he could use his name for the main character in a series of politieromans he's planning to write – similar in vein to DeKok complaining about Baantjer's fertile imagination. It will also confuse readers who picture Van Opperdoes and Jacob as Baantjer and De Waal.

Anyhow, Jan Willem van Deventer is the name that belongs to the victim and he was student from a family that broke into peaces: the mother would not be surprised if her was son was murdered, while the father is convinced that he's to blame for his son's suicide. The girl in the café Jan Willem was interested in took his gifts, but was seeing someone else and a teacher from the university and his roommates refuse to tell the whole or a straight story – with an unfortunate suicide as a consequence. Meanwhile, Van Opperdoes and Jacob move between cafés, some for breakfast or a cup of coffee and other for work, and in one of them, they come across a polite-mannered, but cut-throat, criminal known as "De Regulaar" ("The Fixer"), who paid students for certain jobs. And here we have another café scene I very much appreciated: Van Opperdoes deducing whom the fixer is in the café and immediately plotting his capture. The guy never stood a chance.

The eventual solution of the death of the young student is a rather bleak one, because the answers they've found resolve nothing for the better for any of the people involved and the court will probably show some leniency on the guilty party. This is definitely not a cozy, but there were some clues in place that made this a (light) mystery as well as a police procedural and the ghost of Van Opperdoes' late wife (see previous reviews) even pointed out a clue of sorts that he had missed, which ended the book on a high note for me. Hey, a non-intrusive spirit entity pointing out something that her husband, The Great Detective, had missed is something I have absolutely no problem with.

De Waal has moved on with this series now that his late partner in crime can't tease him anymore with implausible plot twists, but the style and warm spirit that was so characteristic of Baantjer is what makes his memory and indelible presence in these books.

The title for later this year has not yet been announced, but I guess it probably will be something like Een geluk bij een ongeluk (A Blessing in Disguise) or Een adder onder het gras (A Snake in the Grass).

By the way, I use the English name of DeKok on this blog because this is an English-language blog. It also amused me to no end that from all the variations on the name that the translator could've decided on, he picked the one variation that makes him look silly every time he spells out his name when he's introducing himself. DeKok (with Kay-Oh-Kay) is the conventional spelling of the name DeKok or Kok. Why not settle for De Kock (with Cee-Kay), if you insist on changing the name?
Geplaatst door TomCat on 5/25/2013